Is Tottenham vs Chelsea on TV today? Channel, kick-off time and how to watch Premier League fixture 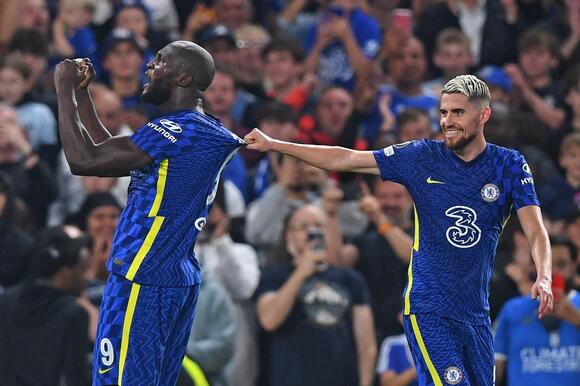 Tottenham Hotspur will aim to bounce back from their first defeat under Nuno Espirito Santo when they host an in-form Chelsea side in the Premier League today.

Spurs suffered a surprise 3-0 defeat to Crystal Palace last weekend to bring an end to their perfect start to the season after they had secured three wins from three before the international break.

Chelsea beat Aston Villa by the same scoreline to move to 10 points under Thomas Tuchel, before Romelu Lukaku struck his fourth goal in as many games as the Blues opened their Champions League campaign with a 1-0 win over Zenit St Petersburg on Tuesday .

Spurs have not beaten Chelsea in the Premier League since November 2018 and the Blues are unbeaten in their last five league meetings against their London rivals.

Here’s everything you need to know ahead of the match today.

The match will kick off at 4:30pm BST on Sunday 19 September.

It will be shown live on Sky Sports Main Event and Premier League, with coverage staring at 4pm. If you’re not a Sky customer you can grab a NOWTV Day Pass here to watch without a subscription.

Spurs are set to be without Son Heung-min and Eric Dier due to injury, while Japhet Tanganga is serving his one-match suspension after he was sent off at Palace last weekend.

Nuno was then dealt a further blow as Lucas Moura and Steven Bergwijn suffered injuries during the 2-2 draw against Stade Rennes on Thursday, with both players set to be ruled out of the meeting with Chelsea today. Bryan Gil could come in for his first Premier League start.

The Spurs manager is set to be boosted, however, by the return of Davinson Sanchez, Cristian Romero and Giovani Lo Celso following the end of their quarantine. Due to the absence of Dier and Tanganga, Nuno may be forced to put Sanchez and Romero straight into his starting team in the centre of defence.

Chelsea manager Tuchel could have N’Golo Kante available if the Frenchman recovers from an ankle injury suffered against Liverpool before the international break.

The form of Mateo Kovacic and Jorginho could see Tuchel be patient with Kante’s return, however, while Christian Pulisic remains sidelined with an ankle injury picked up on international duty with the USA.

It’s hard to imagine anything other than a Chelsea win given the form of Romelu Lukaku and the number of absences in the Spurs squad. Thomas Tuchel’s side haven’t played anywhere near their best over their last two matches but still picked up wins over Villa and Zenit - and it’s Lukaku who has been the difference. He could be set for another big performance against an untested centre-back partnership. Tottenham 0-2 Chelsea

Team news and stats ahead of Man Utd Women vs Man City Women on Saturday; kick-off 1.30pm. Man Utd Women manager Marc Skinner said his squad is in good health but that he will be without full-back Martha Harris for a couple of weeks and Kirsty Smith - with both also likely to miss next week's game against Durham Women.
PREMIER LEAGUE・12 DAYS AGO
CBS Sports

The Premier League is back as the international break comes to an end. After a two-game homestand, Chelsea will be on the road. They will take on Brentford at 12:30 p.m. ET on Saturday at Brentford Community Stadium after a week off. Both clubs have allowed few goals on average (Chelsea 0.43, Brentford 0.86), so any goals scored will be well earned.
PREMIER LEAGUE・5 DAYS AGO
vavel.com

Brentford vs Chelsea preview: How to watch, kick-off time, team news, predicted lineups, and ones to watch

Brentford FC welcome Chelsea FC to the Brentford community stadium this Saturday in what promises to be an entertaining encounter. Brentford will come into this match on the back of a two-one win against West Ham United as well as a draw against Liverpool the week before. It means the newly promoted club find themselves in an impressive seventh place and just three points behind Liverpool in second.
PREMIER LEAGUE・5 DAYS AGO
NJ.com

After the International Pause of FIFA World Cup Qualifying action this past week, the English Premier League returns with the club with the best start of the season taking a squad who has had one of the more surprising starts in 2021, as Chelsea prepares to take on Brentford. The...
CHELSEA, MI・5 DAYS AGO
Sports Illustrated

Chelsea winger Christian Pulisic has suffered a setback in his recovery from an ankle injury sustained Sept. 9 against Honduras.
UEFA・1 DAY AGO
fourfourtwo.com

For some, the Champions League is the yardstick for how good you are as a footballer. Doing it across 38 matches is one thing - but try doing it under the lights against the best in Europe. Plenty of tried, too. Champions League masterclasses are reserved for only the finest...
UEFA・1 DAY AGO
ESPN

The summer transfer window was unlike any other; see all the major deals and check out how we graded the biggest signings. And just because the window is shut until January, that doesn't mean the rumours won't keep coming. Here is the latest gossip and speculation. TOP STORY: Man City,...
PREMIER LEAGUE・19 HOURS AGO

Chelsea “regularly” discuss the possibility of signing Erling Haaland and considered a move for the Borussia Dortmund striker this summer, Thomas Tuchel has revealed. Haaland has continued his goalscoring exploits for Dortmund this season and has now scored 49 Bundesliga goals in as many appearances. It has been widely reported that the Norway international has a release clause of around £80million in his contract that will become active in 2022. Chelsea, along with Real Madrid, Manchester United and Manchester City, were linked with a move for the 21-year-old this summer, in which they signed Romelu Lukaku from Inter Milan for...
PREMIER LEAGUE・14 HOURS AGO
The Independent

Thomas Tuchel has insisted he has no regrets over starting Romelu Lukaku and Timo Werner against Malmo despite the Chelsea strike duo facing a spell on the sidelines.Lukaku suffered an ankle problem and Werner a hamstring injury to leave a cloud over Chelsea’s facile 4-0 Champions League win over Malmo at Stamford Bridge.Jorginho slotted two penalties, while Andreas Christensen and Kai Havertz delivered fine finishes as the Blues overwhelmed the limited Swedish outfit.Tuchel admitted however that the Blues will have to do without Lukaku and Werner for several weeks after their injuries – but the Stamford Bridge boss insisted he...
PREMIER LEAGUE・3 HOURS AGO
The Independent

Thomas Tuchel has told Kai Havertz and Callum Hudson-Odoi to “prove a point” and fill the boots of injured duo Romelu Lukaku and Timo Werner.Lukaku hobbled out of Chelsea’s 4-0 Champions League win over Malmo with an ankle problem, while Werner suffered a hamstring injury.Blues boss Tuchel confirmed both forwards will be sidelined in the coming weeks even though specific prognoses are yet to be determined.Hudson-Odoi laid on Havertz’s goal as the duo linked up well in smart cameos against Malmo, leaving manager Tuchel to lay down the gauntlet for Saturday’s Norwich clash and beyond.“There’s always a chance to prove...
PREMIER LEAGUE・1 HOUR AGO
Insider

"Manchester United remain a team of individuals rather than a team. Cristiano Ronaldo has added to that rather than fixed it," said Jamie Carragher.
PREMIER LEAGUE・2 DAYS AGO

Barcelona Femení kicked off their European title defense in dominant fashion, beating Arsenal 4-1 at the Johan Cruyff Stadium in the Women’s Champions League group stage opener. Barça were on top from the start and created plenty of chances, scored some really good goals and proved they are still the dominant force in Europe and the favorites to win it all.
SOCCER・15 DAYS AGO
The Independent

PSG manager Mauricio Pochettino has hailed the “connection” between his two extremely talented forwards in the form of Leo Messi and Kylian Mbappe after his side beat RB Leipzig 3-2 in the Champions League on Tuesday (19 October). Messi scored twice and Mbappe once as Paris Saint-Germain overcame their German...
SOCCER・1 DAY AGO
The Independent

Is Andorra vs England on TV? Kick-off time, channel and how to watch World Cup qualifier

England face Andorra in qualifying for the 2022 World Cup on Saturday evening as the Three Lions look to consolidate their place at the top of Group I.England are currently in pole position to clinch the sole automatic qualification spot for the World Cup in Qatar, four points clear of Albania and five points ahead of Poland having each played six games.FOLLOW LIVE: Team news and match updates as England play AndorraGareth Southgate’s side have the luxury of some straightforward fixtures to see out the campaign, with a trip to group minnows San Marino awaiting on the final day of...
SOCCER・11 DAYS AGO
USA TODAY Sports Media Group

Italy will meet Spain in the semifinals of the 2020-21 UEFA Nations League on Wednesday from Milan. Italy will be looking to keep their 36-game unbeaten streak going on Wednesday, while Spain will be looking for some revenge after losing to Italy in the Euro 2020 semifinal match. Both clubs will be without some key players today but this is sure to be a fantastic match to watch.
UEFA・14 DAYS AGO
Syracuse.com

Sergio Aguero has suggested Ansu Fati might be a once in a generation talent that Barcelona need to nurture if he is to reach his potential. The former Manchester City striker came to play alongside Lionel Messi but with his Argentine team-mate gone it was 18-year-old Fati he was asked about before his Barca debut in the Champions League on Wednesday.
SOCCER・1 DAY AGO
The Independent

Watford vs Liverpool prediction: How will Premier League fixture play out today?

Liverpool have gone under the radar and made an incredibly strong start to the season, winning four and drawing three of their opening seven Premier League games.Now they face a different proposition in Watford as the Hornets hope a new manager bounce can land them a result against Jurgen Klopp’s men.Premier League title-winning boss Claudio Ranieri returns to the English top flight following the departure of Xisco and will be looking to make an instant impact.FOLLOW LIVE: Watford vs Liverpool build-up, team news, line-ups and more todayIt is the start of a rechid run of fixtures for his side, so...
PREMIER LEAGUE・5 DAYS AGO
The Independent

What the papers sayA strong start to the season reportedly has the eyes of bigger clubs on Southampton’s Mohamed Elyounoussi. The Sun cites the Daily Record as saying Arsenal are monitoring the winger, who has scored four goals and provided two assists in seven appearances for Saints this term. But the papers add Leicester are also interested in the 27-year-old Norway international.Mohamed Salah wants some £400,000 per week to re-sign with Liverpool according to the Telegraph. The Egypt forward, 29, has scored an impressive 135 goals in 214 games for the Reds to be currently rated one of the...
PREMIER LEAGUE・2 DAYS AGO