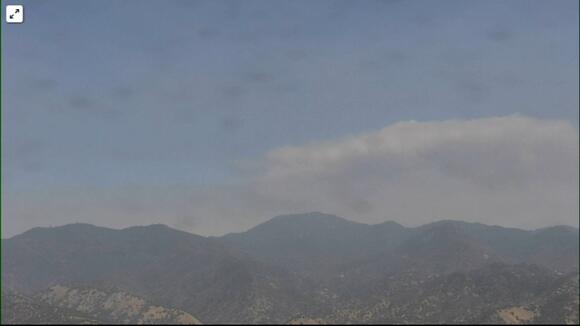 The Tulare County Sheriff's Office on Saturday issued fresh evacuation orders for some communities near the Windy Fire in Sequoia National Forest. The communities of Ponderosa and Quaking Aspen have been ordered to evacuate immediately. A temporary evacuation point has been set up at Porterville College on 100 East College Avenue. Anyone in need of assistance can call 211. On Saturday, the sheriff's office also issued an evacuation warning that includes M107 at Dome Rock, north to HWY 190/M90 at North Road (MT21S50), east to Route 21S05, at Needles Trail, south to Lloyd Meadow at Lower Peppermint Road (MT22S82). Officials say that while these residents are not required to leave at this time, they should prepare to evacuate if the fire continues to spread toward their communities. The sheriff's office says it has closed all roads for M107 from HWY 190/M90 to M50 at Parker Pass. There will be a roadblock at HWY 190 and Redwood - only residents of Cedar Slope will be allowed through with proof of residency. The new evacuation order comes two days after the sheriff's office ordered the evacuation of Johnsondale and Camp Whitsett, including M107 at Dome Rock, east to Lloyd Meadow at Lower Peppermint Road (MT22S82), south to M99 at Sherman Pass Road, west to M107 and M50. The Windy Fire has rapidly grown to more than 12,370 acres with 0% containment. All roads and trail ways near the wildfire in the Sequoia National Forest are closed. The U.S. Forest Service said the closures are in effect until the end of the year to help protect the public and firefighters. Sparked by lightning, the fire is burning in steep terrain on the Tule River Reservation and in the Giant Sequoia National Monument. It's among eight fires started by lightning in the forest during a storm last week. NOTE: The video above is from an earlier story and will be updated.

Correctional Officer Malama Scanlan passed away this past Tuesday, five years after he was injured in a shooting at the Fresno County Jail.
FRESNO COUNTY, CA・23 HOURS AGO
ABC30 Central Valley

EMS crews were evaluating each employee, and so far, four have been taken to a local hospital for treatment.
TULARE COUNTY, CA・1 DAY AGO

City workers are making sure everything is working properly ahead of the expected rain Sunday and Monday.
FRESNO, CA・1 DAY AGO
ABC30 Central Valley

Firefighters are working to determine what sparked a fire that burned a home and vehicle, killing at least two pets, in Fresno County.
FRESNO COUNTY, CA・2 DAYS AGO
ABC30 Central Valley

Tracking the atmospheric river: Here's when Central CA will see rain this weekend

Officials ask people to be careful around construction zones and areas that may flood or have loose soil.
CALIFORNIA STATE・2 DAYS AGO

Man who died after being pulled from pool at Fresno water park drowned, officials say

It happened this past Father's Day. The 46-year-old was pulled from the bottom of the pool and later died at the hospital.
FRESNO, CA・1 DAY AGO
ABC30 Central Valley

All civilian visitation to the Bob Wiley Detention Facility have been suspended, including pastors and volunteers who provide services to inmates.
TULARE COUNTY, CA・1 DAY AGO
ABC30 Central Valley

An investigation is underway after officers say a man died in a crash in Fresno County Tuesday night.
FRESNO COUNTY, CA・2 DAYS AGO
ABC30 Central Valley

The Fresno County Sheriff's Search and Rescue team found a missing hiker who had been stranded in freezing conditions for two days.
FRESNO COUNTY, CA・3 DAYS AGO

More than 2,000 without power in southeast Fresno

Cause of death to be revealed today in case of Mariposa Co. family found on hiking trail

Authorities will reveal the latest updates on the investigation and the cause of death during a news conference at 2 pm.
MARIPOSA COUNTY, CA・2 DAYS AGO
ABC30 Central Valley

An atmospheric river will move into the Valley this week. ABC30 Meteorologist Madeline Evans is tracking when rainfall will hit Central California.
HANFORD, CA・2 DAYS AGO
ABC30 Central Valley

Yosemite Lakes Park arsonist Kenneth Jackson out on parole, prohibited from being in Madera County