Texas doctor who provided abortion in violation of new law: 'I had a duty of care' 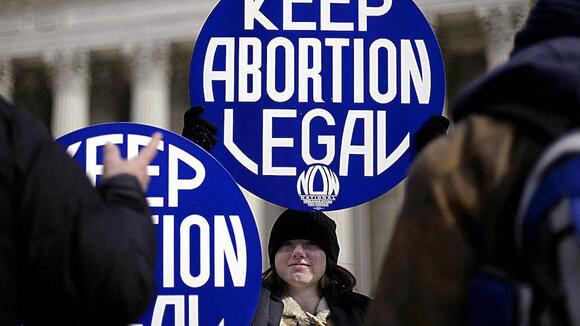 A Texas doctor has revealed that he recently performed an abortion in violation of the state's controversial new law that prohibits nearly all abortions after roughly six weeks into a pregnancy, arguing that he “had a duty of care to this patient.”

Alan Braid, a San Antonio-based physician, wrote in an op-ed published by The Washington Post on Saturday that on Sept. 6, just five days after the Texas abortion ban went into effect, he “provided an abortion to a woman who, though still in her first trimester, was beyond the state’s new limit.”

“I acted because I had a duty of care to this patient, as I do for all patients, and because she has a fundamental right to receive this care,” he added.

Braid, who began his obstetrics and gynecology residency at a San Antonio hospital in 1972, said that during the year before abortion was recognized as a constitutional right in the 1973 landmark Supreme Court decision in Roe v. Wade, he saw “three teenagers die from illegal abortions.”

Following the Supreme Court’s decision earlier this month not to block Texas’s new abortion law, Braid wrote, “For me, it is 1972 all over again.”

The doctor said that he had been a practicing OB/GYN for more than four decades, “conducting Pap smears, pelvic exams and pregnancy check-ups; delivering more than 10,000 babies; and providing abortion care at clinics I opened in Houston and San Antonio, and another in Oklahoma.”

He went on to say that the new Texas law “shut down about 80 percent of the abortion services we provide.”

The so-called fetal heartbeat law in Texas bans all abortions after cardiac activity is detected, which can occur as early as six weeks into a pregnancy, before many people know they are pregnant.

While the law provides exceptions for medical emergencies, it does not do so for pregnancies resulting from rape or incest. It also allows virtually any private citizen to file a lawsuit against a person who has performed or aided in the performance of an abortion procedure.

Individuals who take legal action have the opportunity to win $10,000 for successful lawsuits.

Braid wrote Saturday that while he “fully understood that there could be legal consequences” for his decision, he “wanted to make sure that Texas didn’t get away with its bid to prevent this blatantly unconstitutional law from being tested.”

The doctor, who noted that his clinics are among the plaintiffs represented by the Center for Reproductive Rights in the federal lawsuit aimed at stopping the Texas abortion ban, added that he believes “abortion is an essential part of health care.”

“I have spent the past 50 years treating and helping patients,” he continued. “I can’t just sit back and watch us return to 1972.”

The Biden administration has already committed to fighting the Texas law, with the Department of Justice filing a motion this week requesting either a preliminary injunction or a temporary restraining order that would prevent the ban from going into effect.

The Department of Health and Human Services said Friday that it would be taking action to protect patients and abortion providers in Texas, including by giving up to $10 million in grants for clinics that have seen an increase in demand following the implementation of the law.

A lot of people are crying because they are losing their jobs for refusing the covid vaccine. Saying we have the right to have control over our own bodies! Maybe now they have understanding of PRO CHOICE. You can’t have it both ways folks.

Take away his license to practice, like they've done to some of the doctors giving ivermectin, hydroxy chloroquine, and remdesvere.

A smaller dose of Pfizer-BioNTech’s Covid-19 vaccine cleared its first regulatory hurdle Tuesday for use in young children, after a Food and Drug Administration advisory committee voted to recommend it for emergency use authorization for those ages 5 to 11. The 17-0 vote, with one abstention, will now go to...
HEALTH・5 HOURS AGO
The Associated Press

BOISE, Idaho (AP) — The suspect in a Boise mall shooting that killed two people and injured four others has died, the Boise Police Department said Tuesday. The Ada County Coroner identified the suspected shooter as Jacob Bergquist, a 27-year-old Boise man. Coroner Dotti Owens said Bergquist’s cause of death was still pending, but he died late Tuesday morning at a hospital.
BOISE, ID・12 HOURS AGO
The Associated Press

TOKYO (AP) — Japanese Princess Mako quietly married a commoner without traditional wedding celebrations Tuesday and said their marriage — delayed three years and opposed by some — “was a necessary choice to live while cherishing our hearts.”. The marriage to Kei Komuro cost Mako her royal status. She received...
RELATIONSHIPS・22 HOURS AGO
The Associated Press

Half its original size, Biden’s big plan in race to finish

WASHINGTON (AP) — Half its original size, President Joe Biden’s big domestic policy plan is being pulled apart and reconfigured as Democrats edge closer to satisfying their most reluctant colleagues and finishing what’s now about a $1.75 trillion package. How to pay for it all remained deeply in flux Tuesday,...
PRESIDENTIAL ELECTION・9 HOURS AGO

Washington - One hundred and fifty people across three continents have been arrested and charged with drug trafficking and other illicit activity in a sweeping international law enforcement initiative targeting the illegal trafficking of drugs on the Darknet, the Justice Department announced Tuesday. Operation Dark HunTor, a collaborative effort across...
LAW ENFORCEMENT・2 HOURS AGO
NBC News

Police monitoring Brian Laundrie last month thought he had come home. It was his mom.

Police in North Port, Florida, have admitted that they made a mistake while monitoring Brian Laundrie's movements from his home last month. Investigators trained cameras on the Laundrie residence after his fiancée, Gabby Petito, was reported missing by her family in New York on Sept. 11. Laundrie had returned to Florida without her from their cross-country road trip Sept. 1, police said.
NORTH PORT, FL・11 HOURS AGO
NBC News

Comedian Dave Chappelle said Monday he'd be willing to meet with transgender employees of Netflix who have called for the streaming platform to remove his October comedy special, "The Closer." But Chappelle said any meeting would have to be on his terms: "You will not summon me." "First of all,...
CELEBRITIES・1 DAY AGO
ABC News

Rosenworcel has been a fierce advocate of net neutrality.
CONGRESS & COURTS・5 HOURS AGO

CHICAGO (AP) — In the fall of 1976, Carolyn Sanders received an exciting postcard from her brother. “I’ll see you soon cause I love you,” Francis Wayne Alexander — known to his family as Wayne — wrote to his younger sister. She hadn’t spoken with him since his 1975 wedding and hoped the brief note meant he was coming to visit the family on Long Island, New York, for Christmas.
CHICAGO, IL・4 HOURS AGO
NBC News

WASHINGTON — The Senate confirmed two Republicans nominated by President Joe Biden to top diplomatic posts Tuesday. Former Arizona Sen. Jeff Flake was confirmed as U.S. ambassador to Turkey, and Cindy McCain, the widow of GOP Sen. John McCain of Arizona, will be the country's representative at the United Nations Agencies for Food and Agriculture.
CONGRESS & COURTS・4 HOURS AGO