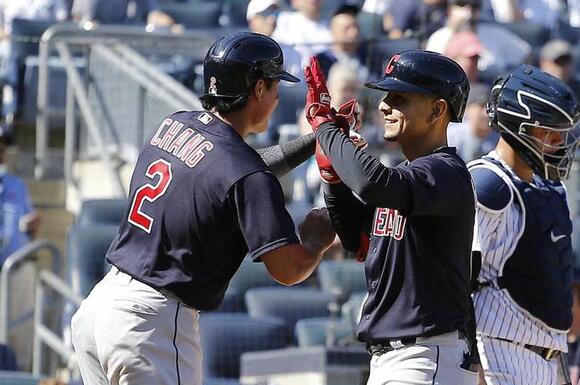 Andres Gimenez capped a seven-run fifth inning with a three-run homer, and Franmil Reyes added a two-run homer in the sixth, as the visiting Cleveland Indians rolled to an 11-3 victory Saturday over the New York Yankees.

Reyes drove in three runs while Yu Chang homered and drove in three runs for the Indians. Jose Ramirez added a late homer as Cleveland (72-74) won for only the fifth time in 15 games and rebounded nicely after getting shut out in Friday’s series opener.

Gimenez’s homer occurred after the Indians capitalized on an error by New York catcher Gary Sanchez with one out in the inning.

Sanchez, who did not corral two wild pitches in Thursday’s 3-2 loss in Baltimore, dropped a foul pop by Oscar Mercado. Instead of recording the second out of the inning, Mercado was hit by a pitch and began a string of six straight Cleveland hitters to reach base.

Ramirez followed with a walk to knock out New York starter Luis Gil (1-1) and Reyes hit an RBI double to left off Albert Abreu that went over the leaping attempt of third baseman DJ LeMahieu.

Chang pushed the lead to 4-0 with an RBI double to the right field corner and Owen Miller followed with an RBI single up the middle past the diving attempt of shortstop Gio Urshela for a 5-0 advantage. Gimenez crushed his two-out home run into the right field seats for an 8-0 lead. It was his third of the season.

Reyes gave Cleveland a 10-0 lead in the sixth inning with a two-run home run, his 30th. 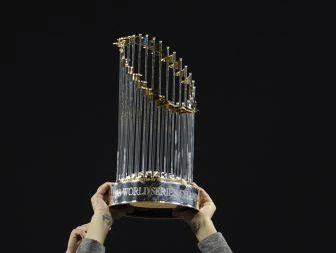 Giancarlo Stanton hit his 30th homer and Voit added a two-run homer for the Yankees, who entered Saturday a half-game up on the Toronto Blue Jays for the American League’s second wild card and dropped 1 1/2 games behind the wild-card leading Boston Red Sox.

Cleveland’s Aaron Civale (11-4) allowed four hits in six scoreless innings in his third start back from a sprained middle finger in his right hand. He struck out four, walked one and threw 91 pitches.

Gil was charged with three runs (two earned) and three hits in 4 1/3 innings. He struck out six and walked four.

The internet never forgets. Former New York Yankees slugger Alex Rodriguez has been covering the 2021 MLB playoffs by resuming his role as a studio analyst for FOX Sports. Last week, Rodriguez was analyzing the American League Division Series between the Boston Red Sox and Tampa Bay Rays with David Ortiz, Frank Thomas and Kevin Burkhardt. The gang was discussing a video clip from Game 1, when the Rays were seen eating popcorn in the dugout during the seventh inning of their 5-0 win.
MLB・12 DAYS AGO
The Spun

If the Boston Red Sox are going to take down the New York Yankees in the American League Wild Card Game tonight, they’ll need to do it without star slugger J.D. Martinez. Martinez was not included on Boston’s roster for the AL Wild Card Game due to a sprained left ankle. He suffered the injury in the fifth inning of Boston’s regular-season finale on Sunday.
MLB・20 DAYS AGO
New York Post

The New York Yankees flamed out of the 2021 MLB postseason after getting wrecked by the Boston Red Sox in a 6-2 American League wild-card game loss at Fenway Park on Tuesday. The Yankees crashing and burning against their fiercest rival and despite a luxurious payroll only add fuel to an offseason that’s going to have them answering plenty of questions, including whether the team’s future would still include veteran outfielder Brett Gardner — at least until the end of the 2022 MLB season.
MLB・19 DAYS AGO

Carlos Correa is going to get paid. It’s just a matter of how much the two-time All-Star will be offered. Correa headlines a bumper crop of free-agent shortstops, which also includes the Los Angeles Dodgers’ Corey Seager, Colorado Rockies’ Trevor Story and New York Mets’ Javier Baez. So what will...
MLB・11 DAYS AGO
Empire Sports Media

It’s still early in the offseason for the New York Yankees. The World Series will begin on Tuesday, between the Houston Astros and the Atlanta Braves, and the Bombers, once again, have to see it on TV. But that doesn’t mean they can’t start to make some preliminary plans with the 2022 campaign in mind.
MLB・15 HOURS AGO
Empire Sports Media

After an early exit from the postseason yet again, the New York Yankees face a multitude of questions and decisions to be made before the start of the 2022 season. The biggest one is if the Yankees have it in them to create a shakeup that can turn this team into a World Series contender for real. If they can do that, some faces of the Yankees will have to go. So here is my assessment of the situation facing the Yankee organization in no particular order.
MLB・14 DAYS AGO
Empire Sports Media

New York Yankees: All the Yankees news in one place

The New York Yankees lost the wild card game to the rival Boston Red Sox and are sitting back watching other teams reach for their dreams, while they are still licking the wounds of another failed season, not advancing in the postseason. But baseball goes on for four teams. The Atlanta Braves lead the Lost Angeles Dodgers two games to none as they travel back to Los Angeles to play the next three games if necessary. The Houston Astros travel to Fenway Park where they are 1-1 in their seven-game contest with the Red Sox.
MLB・7 DAYS AGO

The New York Yankees announced today that they are losing first base coach Reggie Willits whose contract is up in December. According to Lindsey Adler, Willits is leaving the organization to be a volunteer assistant coach at the University of Oklahoma. Willits spent his entire playing career in the outfield with the Los Angeles Angels.
MLB・4 DAYS AGO
hypefresh.co

As the New York Yankees approach the playoffs, they find themselves questioning Gary Sanchez’s expectations. The catcher is once again having a wickedly inconsistent year for the Yankees. Early this season, many considered him a potential All-Star and now it seems to be an afterthought nearing the playoffs. Consider the...
MLB・13 DAYS AGO
mediavillage.com

After catching lightning in a bottle in 2017, baseball's most prestigious franchise suddenly has fallen behind the pack in MLB. We recap what could have been a dynasty and what is now a mockery, along with what is next for the Bronx Bombers.
MLB・14 DAYS AGO
Q 105.7

With the 29th selection in the second round of the 2012 MLB Amateur Draft, the New York Yankees are proud to select, from Argyle High School in Texas, centerfielder Austin Aune. It's been nine years since that happened. While Carlos Correa, Kevin Gausman and others continue to pursue their baseball...
MLB・14 DAYS AGO

New York Yankee fans over the past week have been trying to swallow a bitter pill, another early exit to the postseason. First, they lost the wild card game against their traditional rivals, the Boston Red Sox. Now they have to sit back and watch teams they really don’t like advance to World Series play. The Yankees have now not even played in a World Series contest since 2009. Twelve years of pain, and Yankee fans want answers.
MLB・11 DAYS AGO
Sportsnaut

The New York Yankees will not renew the contracts of hitting coach Marcus Thames and third base coach Phil Nevin,
MLB・11 DAYS AGO
Empire Sports Media

Suppose we know anything about New York Yankees, baseball. In that case, it’s that everything is subject to change, including having a troubling questionable season to winning 13 consecutive games, then going on a losing streak only to get to the AL Wild Card and losing there to the rival Boston Red Sox. But change is not limited to the big team. Things can change ever more quickly in the minors as well. So although sensation Jasson Dominguez has been the Yankees’ number one prospect for a couple of years, that may no longer be true.
MLB・13 DAYS AGO
chatsports.com

New York Yankees: Jameson Taillon to go under the knife

As the New York Yankees attempted to save a few bucks during the offseason, they turned to the Pittsburgh Pirates in an attempt to shore up their rotation. The oft-injured Jameson Taillon was brought in by trade, with the Yankees hoping that he would finally be healthy. Taillon did his...
MLB・6 DAYS AGO
chatsports.com

It’s been almost two weeks since we last discussed the New York Yankees and the disappointingly lost 2021 season. A lot has happened in that short time since. Marcus Thames and Phil Nevin won’t return in their respective roles as hitting and third base coaches. Aaron Boone’s future isn’t any clearer, nor is the team’s offseason plan.
MLB・7 DAYS AGO
Sportsnaut

New York Yankees: Joey Gallo getting hate for getting dressed

There are many reasons why a player may not be a fit on a team. Maybe their personality is not the correct fit for the clubhouse, or the media is too high pressure. Some players just do not thrive in larger markets. Then, in the case of New York Yankees outfielder Joey Gallo, the media looks for a reason why they don’t fit in.
MLB・18 HOURS AGO