By Sharde Gillam
HelloBeautiful
28 days ago 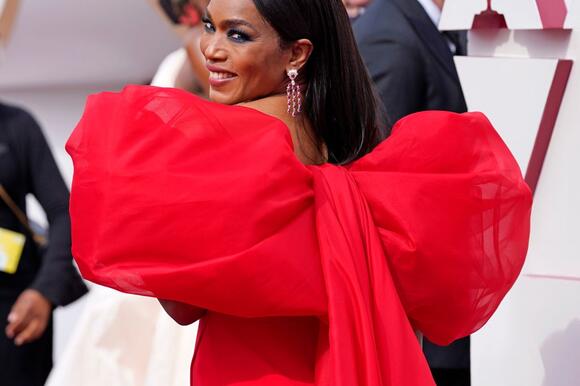 Angela Bassett’s beauty is timeless and now it’s been officially captured permanently for years to come. This week, Madame Tussauds in Los Angeles revealed its latest wax figure of the 63-year-old actress and the results are breathtaking! The 9-1-1 star took to Instagram to share a flick of her standing next to the new wax figure and fans were shocked at how accurate the figure was, with many thinking they were seeing double!

Dressed in a blushing pink jumpsuit, the veteran actress shared her first look at the new wax figure on Instagram. “Oh Lord, I’m a twin,” she exclaimed when she first saw the figure. “Hey me! Oh my God, it looks so lifelike!” she continued before admiring the wax figure’s glam including the toenail polish, eyes, and everything in between.

Angela then posted a selfie with her wax figure twin with a caption that read, “ Seeing double ,” just further confuse us all.

Angela wasn’t the only one shocked by how accurate the wax figure looked as fans flooded her IG comments with utter disbelief. “Ok, that’s cray. I legit can’t tell,” one fan commented while another said, “This is the MOST accurate wax figure! They really did you justice .”

They really nailed it!

Meeting her wax figure twin isn’t the only thing the Black Panther actress has been up to lately as she’s set to appear in a special birthday surprise for Jada Pinkett-Smith in Red Table Talk t his coming week. She’ll join Mariah Carey, George Clooney, and the show’s co-hosts, Willow Smith and Adrienne Banfield-Norris, in a very special 50th celebration for Jada. A sneak peek of the upcoming episode was released with Jada’s mother giving a preview of what’s to come in the episode.  “You’re invited to Jada’s 50th surprise birthday party,” she said. “Superstars, precious gifts… it’s an unforgettable celebration, Red Table style.” Catch Angela in the episode this Wednesday, September 22 at 9 am PT/12 pm ET on Facebook Watch.

Angela Bassett Shares Her Winter Must Have

Dreams do come true! The icon herself, Angela Bassett, revealed her new wax figure featured at Madame Tussauds Hollywood, capping off an incredible week of other celebrity figure reveals featuring powerhouse female artists Jennifer Hudson and Tiffany Haddish. Bassett is honored to showcase her very first figure to the public at the world’s greatest wax museum.
CELEBRITIES・29 DAYS AGO
Essence

Toni and Tamar were front and center to watch her boys walk in Marcell Von Berlin's Spring 2022 runway show. While a career in music has been the norm for Toni Braxton and her famous siblings, for her sons, modeling just might be their professional path. Both handsome men, Diezel,...
BEAUTY & FASHION・25 DAYS AGO
Daily Mail

The Los Angeles Philharmonic held its very first concert on Saturday night since shutting down 579 days ago due to the coronavirus pandemic. And stars turned out in droves to the Walt Disney Concert Hall in Los Angeles to welcome Gustavo Dudamel and his famed orchestra back to the stage.
CELEBRITIES・6 DAYS AGO
rnbcincy.com

Get The Details On Angela Bassett’s Chic Emmy’s Hair

LISTEN LIVE. LIKE US ON FACEBOOK. FOLLOW US ON TWITTER. Last night, Hollywood’s finest gathered to celebrate the best in television and film for the 2021 Emmy Awards. Among our favorite starlets like Issa Rae and Michaela Coel, was the ageless Angela Bassett in a black and hot pink Greta Constantine Resort 2022 gown. The actress partnered the look with jewelry by Gismondi, a clutch by Tyler Ellis, and Louboutins on her feet.
BEAUTY & FASHION・26 DAYS AGO

“I’m glad we’re here talking about this today, the BBLs, because I was considering getting one,” Jada revealed.
CELEBRITIES・16 DAYS AGO
ETOnline.com

Will Smith is continuing to open up about his marriage to Jada Pinkett Smith. The 53-year-old actor is featured in a new cover story for GQ, and discusses the revelations in his upcoming memoir, Will. GQ interviewer, Wesley Lowery, read an advanced copy of the book, and notes that Will...
CELEBRITIES・19 DAYS AGO
People

Jada Pinkett Smith's 50th birthday was full of surprises!. In an exclusive look at this week's Red Table Talk, Pinkett Smith reminisces about old friendships when she receives a surprise visit from her sons Trey and Jaden Smith. As the two brothers sneak up behind the Girls Trip star, Pinkett...
CELEBRITIES・25 DAYS AGO
countryliving.com

Give us a second. We're still picking up our jaws from the floor after seeing 9-1-1 star Angela Bassett at the 73rd Primetime Emmy Awards. The award-winning actress, producer, director, and activist continues to stun at the graceful age of 63. She recently walked the red carpet at the 2021 Emmy Awards in a gorgeous dress designed by Greta Constantine. The black-and-pink ensemble was accompanied by Gismondi jewelry, a Tyler Ellis clutch, and classic Louboutin heels. Let's just say that Angela was absolutely glowing as Hollywood gathered to celebrate the best in television and film.
CELEBRITIES・24 DAYS AGO

Angela Bassett is excited to be returning to Wakanda. The 63-year-old actress spoke with ET's Nischelle Turner on Sunday's 2021 Emmys, where she was presenting, and discussed the second installment of the hit Marvel film, Black Panther: Wakanda Forever. "We're excited about that. Of course, we still have a little,...
MOVIES・26 DAYS AGO
Black Enterprise

Newlywed Issa Rae Admits She Worries Kids Might ‘Slow Her Down’

Between the excitement of her summer nuptials and the upcoming premiere of the final season of Insecure, Issa Rae recently sat down with Self magazine to talk about how health and self-care inform her work. Remaining as private as she has always been about her personal life, the actress and...
FAMILY RELATIONSHIPS・16 DAYS AGO
Popculture

Issa Rae shocked fans when shared photos of her secret France wedding ceremony. The Insecure creator and star married her longtime beau, Luis Diame. Details of the ceremony remain scarce, but the wedding photos are to die for. Rae is basking in married life, but she's not ready to start a family quite yet.
RELATIONSHIPS・18 DAYS AGO
Extra

“Extra’s” Rachel Lindsay spoke with Tina Knowles at the premiere of “The Harder They Fall” in Los Angeles. The western, which stars Idris Elba and Regina King, was produced by Tina’s son-in-law JAY-Z. When asked if she gave him any advice for the movie, Tina said, “I didn’t have to give him any tips because they did all their research.”
CELEBRITIES・1 DAY AGO

9-1-1 actor Oliver Stark spoke about what it’s like working with two co-stars that are executive producers. In an interview with Assignment X, Stark talked about Angela Bassett and Peter Krause. The two manage to act and executive produce the hit Fox series. Stark explained that he felt the difference more on Into The Badlands compared to 9-1-1.
CELEBRITIES・2 DAYS AGO
Hello Magazine

Jenny McCarthy is no stranger to making bold beauty statements and her latest look didn't disappoint. The Masked Singer judge shared a selfie on Instagram to promote her Formless Beauty by Jenny line and the dazzling photo sparked a frenzy amongst her fans. In the image, Jenny was applying her...
CELEBRITIES・11 DAYS AGO
E! News

Watch: Jason Momoa & Isabela Merced Team Up for "Sweet Girl" On Tuesday, Sept. 28, Jason Momoa stepped out to celebrate the world premiere of the new James Bond movie No Time to Die at the Royal Albert Hall in London. And although the Justice League actor's wife, Lisa Bonet, didn't make an appearance, he still had the cutest dates on the red carpet.
CELEBRITIES・18 DAYS AGO
SheKnows

The City of Lights is having one of the biggest events of the year: Paris Fashion Week is back, and for the past several days, we’ve been fawning over some incredible looks from established and up-and-coming designers. We’ve also spotted a number of famous celebrity kids taking the runway, and showing off their love of fashion, too. But nothing could really top Paris Jackson’s look at Stella McCartney’s fashion show, where the young star’s sartorial statement paid homage to McCartney’s own 1999 Met Gala look.
DESIGNERS & COLLECTIONS・12 DAYS AGO
HelloBeautiful

Jay Z and Kelly Rowland reconnected like old friends at "The Harder They Fall" premiere and Twitter is in their feelings over how pure the moment was!
CELEBRITIES・1 DAY AGO
HollywoodLife

Idris Elba’s Kids: Everything to Know About His 2 Children

Idris Elba is the proud father of two kids, including daughter Isan and son Winston, from two relationships. Find out more about them here. Idris Elba is one of Hollywood’s most talented actors but he’s also a great dad. The 49-year-old English star has daughter Isan, 19, from his first marriage and son Winston, 7, from a previous relationship. Although they aren’t always in the spotlight, Idris has expressed joy in fatherhood over the years.
FAMILY RELATIONSHIPS・7 DAYS AGO
HollywoodLife

Ashlee Simpson’s Daughter Jagger, 6, Is Too Cute While Hitting The Red Carpet With Her Parents

Ashlee Simpson stepped out with her little girl Jagger in tow, looking oh-too-cute at a family-friendly movie premiere in Los Angeles. It was a family affair for the Simpson-Ross’s at a red carpet premiere in Los Angeles! Ashlee Simpson walked the carpet with her husband Evan Ross and one of their two children together, Jagger Snow Ross. The darling six-year old girl looked positively adorable at the premiere of L.O.L., Surprise!, which was held at the famed Hollywood Forever Cemetery right in the heart of Tinseltown, on October 6.
LOS ANGELES, CA・9 DAYS AGO