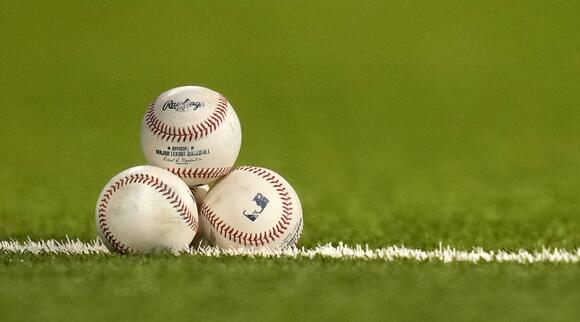 Advocates for Minor Leaguers, an acting voice for minor league players, said that the players protesting will make less than $12,000 a year.

Minor league players for the Phillies and Mets protested their pay on Saturday when they took the field wearing wristbands that read #FairBall. Players from the Jersey Shore BlueClaws and Brooklyn Cyclones participated in the protest during their game to bring attention to their cause.

“Minor League baseball players have been severely underpaid and silenced for decades," players from both teams said in a statement to The Athletic . "Today, we are wearing #FairBall wristbands to show our solidarity with every fan and ally who is working to change that. We love the game of baseball, but it needs to evolve. It is time for every Minor Leaguer to be paid a living wage.”

Minor league baseball players are usually paid twice a month and are only paid five months a year, per The Athletic. The pay standard for players in High-A and Low-A is $500 a week, players in Double-A make $600 and in Triple-A its $700. Players are also responsible for housing and those payments are before taxes.

It's been a rough year for the minors after 40 teams were cut in the winter due to the massive losses sustained from the COVID-19 pandemic. "Advocates for Minor Leaguers" is also written on the wristband. The group was formed last year to be a voice for minor league players since they don't have a union.

“The players who donned wristbands in Brooklyn today will make less than $12,000 this year," Advocates for Minor Leaguers said in a statement to The Athletic. " The MLB teams they play for are worth well more than $2 billion. There is absolutely no excuse for this. We are proud of these players for standing up for themselves and each other. Their message should be heard loud and clear across this industry: it is time to pay Minor Leaguers a living wage.”

The biggest winner of the 2021 major league season is … the 2017 Houston Astros. Settle down. I have not come to exonerate or forgive the sign stealers. I would not argue with anyone who feels the players got off easy by not facing suspension, and the bans on, say, Alex Cora and A.J. Hinch should have been longer than one year considering their one-year expulsions came in the one year the major league season was 60 regular-season games.
MLB・25 DAYS AGO
FanSided

Bartolo Colon is a name that evokes many memories for fans of the New York Mets. From his towering home run against the San Diego Padres to his behind-the-back flip to first base against the Marlins and even all the times his helmet fell off while batting. However, there was...
MLB・7 DAYS AGO
MLB

NEW YORK -- Coming off a second consecutive losing season and with significant front-office and managerial changes coming, the Mets have shaken up their coaching staff. The team this week gave six members of the big league coaching staff permission to seek jobs elsewhere. The Mets are in discussions to reassign hitting coach Hugh Quattlebaum elsewhere in the organization, and they have already shifted Quattlebaum’s assistant, Kevin Howard, back to his old role as director of player development.
MLB・12 DAYS AGO
metsmerizedonline.com

Sources tell me that Mets hitting coaches Hugh Quattlebaum and Kevin Howard will be reassigned to the minor leagues for the upcoming season. The Mets will also let coaches Dave Jauss, Brian Schneider, Jeremy Accardo, Ricky Bones, Gary DiSarcina, and Tony Tarasco have been told they can seek other employment opportunities.
MLB・12 DAYS AGO

Let me reintroduce the Arizona Fall League. Since 1992, the Arizona Fall League has been showcasing the top prospects of Major League teams as the leaves change colors. This would’ve been the 20th season for the AFL. Of course, the COVID-19 pandemic led to the canceling of the 2020 season.
MLB・6 DAYS AGO
metsmerizedonline.com

Sure, MLB’s postseason is officially in full swing, but for all the teams not playing October baseball, the focus continues to be on preparing for next year. Unfortunately, that’s where the New York Mets’ focus is at these days (you know, along with trying to fill out their front office and the coaching staff for 2022).
MLB・8 DAYS AGO
Syracuse.com

Spider-Man, Captain America, Iron Man, Black Widow, Hulk, Thor, Groot and more could be making an appearance at a Syracuse Mets baseball game soon. Minor League Baseball announced a three-year partnership with Marvel Entertainment on Wednesday called “Marvel’s Defenders of the Diamond.” The Mets and 95 other MiLB teams will host at least one Marvel superhero-themed game during the 2022, 2023 and 2024 seasons; teams will wear special edition Marvel-branded jerseys on the field as other Marvel-themed activities and promotions take place throughout the game.
SYRACUSE, NY・6 DAYS AGO
metsmerizedonline.com

In a massive shift in policy and treatment of minor leaguers, Major League Baseball will require every team to pay for its minor league players’ housing in full starting in 2022, according to ESPN‘s Jeff Passan. Passan reported that there isn’t an exact plan set in place (though he said...
MLB・2 DAYS AGO

Hugh Quattlebaum Expected To Stick Around With Mets In Different Role

Although the Mets cleaned house of their failed coaching staff in 2021, it sounds like replacement hitting coach Hugh Quattlebaum is sticking around in the organization. According to SNY's Andy Martino, Quattlebaum is expected to revert back to his original role as hitting director. Assistant hitting coach Kevin Howard will also go back to serving as the Mets' director of player development.
MLB・1 DAY AGO
Sports Illustrated

How The Mets Can Swing A Trade For José Ramírez

When it comes to making blockbuster trades with the Cleveland Indians, the Mets already have experience in this area after they acquired shortstop Francisco Lindor from them in January of 2021. Now, they can potentially pursue another mega-deal with the Indians in order to land star third baseman José Ramírez...
MLB・3 HOURS AGO
Sportsnaut

As the 2021 season concludes, baseball fans and teams are excited for the exciting crop of MLB free agents who
NFL・1 DAY AGO
FanSided

Boston Red Sox fans let Kyle Schwarber have it for letting a pop-up land on the infield, and he probably had it coming. If you let Schwarber play first base long enough, something like this was bound to happen. The Sox knew this when they acquired him from the Washington Nationals, and they sure as hell didn’t trade for him because of his defensive ability.
MLB・25 DAYS AGO
NJ.com

Carlos Correa is going to get paid. It’s just a matter of how much the two-time All-Star will be offered. Correa headlines a bumper crop of free-agent shortstops, which also includes the Los Angeles Dodgers’ Corey Seager, Colorado Rockies’ Trevor Story and New York Mets’ Javier Baez. So what will...
MLB・6 DAYS AGO
The Spun

If the Boston Red Sox are going to take down the New York Yankees in the American League Wild Card Game tonight, they’ll need to do it without star slugger J.D. Martinez. Martinez was not included on Boston’s roster for the AL Wild Card Game due to a sprained left ankle. He suffered the injury in the fifth inning of Boston’s regular-season finale on Sunday.
MLB・15 DAYS AGO
CBS Sports

The Chicago White Sox were eliminated from the playoffs on Tuesday after losing Game 4 of their American League Division Series, 10-1, to the Houston Astros. The White Sox, specifically manager Tony La Russa, did not go quietly into the winter, however. Rather, La Russa made it clear that he...
MLB・7 DAYS AGO
FanSided

Remember during the AL Wild Card Game a few years back between the New York Yankees and Oakland Athletics? A matchup that resulted in a 7-2 victory for the Bombers was overshadowed by the baseball community whining about an innocent A’s fan getting three ounces of beer dumped on his head during a home run celebration.
MLB・11 DAYS AGO
KAJA KJ 97

Astros fans were living for these guys.
MLB・19 DAYS AGO
USA TODAY

Three of our six experts think the NL Central champions will go on to win the World Series.
MLB・13 DAYS AGO
USA TODAY

"When you are doing (an interview) live something usually always happens," Dusty Baker said explaining his on-air reaction to Kiké Hernandez's homer.
MLB・4 DAYS AGO
FanSided

While there are sure to be some free agent signings and wheeling and dealing by Jed Hoyer this offseason, it’s a good bet that a few of your favorite September (and October) Chicago Cubs will still be playing with the team in 2022. We know that won’t be the case for all 67 of the guys the Cubs have used this season, but there’s reason for hope for a few of the bright spots amongst the new-look end of summer North Siders.
MLB・16 DAYS AGO