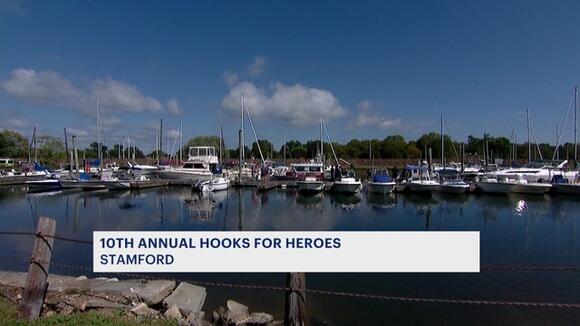 The Halloween Yacht Club in Stamford hosted the 10th annual Hooks for Heroes Fishing Tournament to raise money for a military hospital Saturday.

Sergio Cano has not missed a Hooks for Heroes event since its inception 10 years ago. He served in Iraq and was in Afghanistan when a day in June 2011 changed his life forever.

"My recon team got ambushed, entire team got hit, I took two RPGs, and got shot in the left arm, tourniquet myself, and gave my entire team morphine, and called in air support,” Cano says.

"I tried to salvage my leg for about a year and a half, and it didn't work out so I went the amputation route,” he says.

Since then, Cano says he has a fresh perspective of positivity. However, he says the high suicide rates amongst veterans is why the fundraiser at the Halloween Yacht Club is so important.

“This event alone will probably save lives, you may not see the person or meet them, but you are getting them out of the house to meet others, and other veterans too,” Cano says.

President of Hooks for Heroes Pat Buzzeo says that’s what the event aims to do.

“A lot of veterans help veterans, and it was a responsibility that I feel that us older veterans had to support our younger veterans coming back, Afghanistan, Iraq,” he says.

The event was a friendly competition for the biggest catch, but it was about much more than just fishing.

“We wanted to always keep them busy and doing things,” Buzzeo says. “And fishing is a way of making them relax, getting them together. It also helps with PTSD.”

All of the money raised at the tournament will go toward Operation Gift Cards, which has raised more than $1 million for the hospital since it was started 14 years ago.

For more information about Hooks for Heroes, click here.

Stamford vet advocates for other vets suffering from PTSD

A Stamford military veteran is working to support other veterans who are struggling with PTSD.
STAMFORD, CT・14 HOURS AGO
News 12

Police and the general public are honored NYPD Detective Jason Rivera Friday as a procession brought him to a Westchester cemetery.
HARTSDALE, NY・11 HOURS AGO
News 12

Dozens boarded a bus to Manhattan this morning to stand in solidarity with their brothers and sisters.
NEW YORK CITY, NY・14 HOURS AGO

Outside of the 32nd Precinct, just a block away from where the Harlem shooting incident occurred last week, the memorial dedicated to posthumously promoted Detective Jason Rivera and Officer Wilbert Mora continues to grow in size.
NEW YORK CITY, NY・19 HOURS AGO
News 12

County executives trade paint on the racetrack for a good cause

The county executives of Rockland and Orange counties put the pedal to the metal for a good cause Thursday night.
ROCKLAND COUNTY, NY・19 HOURS AGO
News 12

News 12's Sam Crawford is in the Alert Center monitoring the emotional outpouring on social media to the funeral Mass and procession through Westchester for the slain officer.
WESTCHESTER COUNTY, NY・14 HOURS AGO
News 12

Coverage of the funeral for NYPD Officer Jason Rivera, who died in the line of duty while responding to a call in Harlem.
LAW ENFORCEMENT・17 HOURS AGO

Many New Jersey families are feeling the pressure now that the state’s eviction moratorium is over. But help may be on the way for some as the Salvation Army steps in to assist.
NEW YORK CITY, NY・1 DAY AGO
News 12

Joanne Kountourakis is this month's 12 Making a Difference.
NORTHPORT, NY・20 HOURS AGO
News 12

The suspects also allegedly entered the information, vaccine lot numbers, into the New York State Department of Health database to make it appear like people got the vaccine when they didn't.
SUFFOLK COUNTY, NY・8 HOURS AGO
News 12

State people say the rollover crash in Shelton that left two people dead earlier in the week went unreported until someone spotted it and called 911 Thursday.
7 HOURS AGO

Officers from New Jersey made the trip to St. Patrick's Cathedral to attend the funeral of NYPD Detective Jason Rivera - who was killed in a Harlem shooting.
LAW ENFORCEMENT・4 HOURS AGO
News 12

Here are some stories making headlines across the Hudson Valley.
WESTCHESTER COUNTY, NY・19 HOURS AGO
News 12

An 11-year-old boy with a rare health condition is inspiring others with members of Team Jacob who are helping to raise money for the organization Chai Lifeline.
CHARITIES・16 HOURS AGO
News 12

Fellow NYPD employees took the time to say a few words, and tributes through song were made, highlighting the Dominican heritage the two officers shared.
PUBLIC SAFETY・1 DAY AGO
News 12

A funeral was held at St. Patrick's Cathedral to remember and pay tribute to slain NYPD Detective Jason Rivera.
PUBLIC SAFETY・4 HOURS AGO