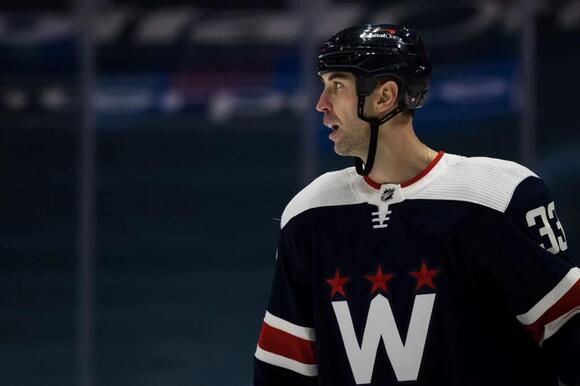 Defenseman Zdeno Chara returns for a 24th NHL season in 2021-22, agreeing to terms Saturday on a one-year deal with the New York Islanders.

The 44-year-old veteran of 1,608 games started his career with the Islanders, who drafted him in the third round in 1996. 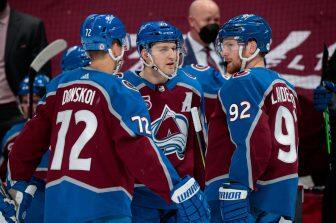 He played last season with the Washington Capitals, contributing two goals and eight assists in 55 games.

He also has 70 points (18 goals, 52 assists) in 200 playoff games. The 6-foot-9 Slovakia native was just the second European-born captain to hoist the Stanley Cup, joining Nicklas Lidstrom of the Detroit Red Wings.

Terms of the contract with the Islanders were not disclosed.

Hockey Hall of Fame forward Mike Bossy announced that he has been diagnosed with lung cancer.A New York Islanders legend, the 64-year-old Bossy announced that he will be stepping away from his role as a hockey analyst with TVA Sport in Canada to receive treatment following his diagnosis.“I can assu…
HOCKEY・4 DAYS AGO
prohockeyrumors.com

A roster crunch has been a long time coming for the New York Islanders. It began today with veterans Thomas Hickey and Richard Panik hitting waivers, but it isn’t over. Even if Hickey and Panik clear waivers and are reassigned to the AHL, the Islanders still have 25 players on the roster and that does not include unsigned RFA forward Kieffer Bellows or tryout defenseman Erik Gustafsson. With the deadline to have 23-man rosters set for the start of the season arriving on Monday evening, time is running out for New York to make some difficult calls.
NHL・14 DAYS AGO
markerzone.com

The deadline for NHL teams to file their opening night rosters is 5 PM Monday. That means anyone who makes the roster must officially be under contract. In true Lou Lamoriello fashion, the New York Islanders GM decided to wait until the last minute to officially file the contracts of Zdeno Chara and Zach Parise, which means their structures are now finally known.
NHL・13 DAYS AGO
NHL

Defenseman was with Islanders for training camp on PTO, played first four NHL seasons for Chicago. Erik Gustafsson signed a one-year, $800,000 contract with the Chicago Blackhawks on Monday. The 29-year-old defenseman had been in training camp with the New York Islanders on a professional tryout (PTO) but was released...
NHL・13 DAYS AGO

Oct 12: Dal Colle has cleared waivers and can be assigned to the minor leagues. Oct 11: After hundreds of players have found themselves on waivers the last few weeks the wire was silent today save for one name. Michael Dal Colle has been placed on waivers by the New York Islanders, meaning he has officially signed a contract with the team. Dal Colle was an unrestricted free agent after failing to receive a qualifying offer from the Islanders earlier this offseason, but spent camp with the team and will now likely report to the minor leagues should he clear. CapFriendly reports that Dal Colle receives a one-year, one-way contract worth the league minimum salary of $750K.
NHL・13 DAYS AGO
cbslocal.com

NEW YORK (CBSNewYork) — The Islanders have reportedly locked up the other half of their top defense pairing for a very long time. A few months after signing Adam Pelech to an eight-year contract, general manager Lou Lamoriello has reached an agreement with Ryan Pulock on an eight-year pact, believed to be worth nearly $50 million, TSN’s Darren Dreger first reported.
NHL・10 DAYS AGO
The Game Haus

The New York Islanders begin their 2021-22 season tonight when they take on the Carolina Hurricanes on the road. This will be the Islanders’ first game after having their hearts broken in game 7 in the conference finals. With that in mind, the expectations for this year’s team are as high as they’ve been in a while. The team’s image has gone from a bunch of scrappy underdogs to bonafide cup contenders. Here’s a preview of their all-important 2021-22 season.
NHL・10 DAYS AGO
nyihockeynow.com

Just call it once less thing that Ryan Pulock has to worry about this season. The New York Islanders defenseman will have plenty on his mind being part of the team’s top defensive pairing, but having to think about a new contract for next season won’t be one of them.
NHL・10 DAYS AGO

It sure is a good time to be a defenceman. The New York Islanders locked down yet another one of their core blueliners on Wednesday night, agreeing to terms with Ryan Pulock on an eight-year contract extension worth an average annual value of $6.2 million. The deal, which will keep...
NHL・10 DAYS AGO
Newsday

CHICAGO – It’s hard not to notice Zdeno Chara because, well, he’s 6-9, 250 pounds and a future Hall of Famer still playing in the NHL at 44 years old. But the Islanders didn’t sign the defenseman just for his unique size and longevity. Chara was brought in to aid the club’s stated desire to win the Stanley Cup. A13-game road trip continued Tuesday night against Chicago in the United Center home opener and Chara’s first two games back in an Islanders’ jersey – he was traded away in 2001 – did not go as planned.
NHL・4 DAYS AGO
jacketscannon.com

The Columbus Blue Jackets face their first divisional opponent on Thursday when they host the New York Islanders. Let’s take a look at what’s new with this team since we last saw them in 2019-20. A new home. What may be the most important change for this franchise is the...
NHL・4 DAYS AGO
Sports Illustrated

The New York Islanders shipped Nick Leddy to the Detroit Red Wings in July rather than risk losing him for nothing in the Seattle Kraken expansion draft. They signed Zdeno Chara as a replacement but general manager Lou Lamoriello could have his eye on Anaheim Ducks defenseman Hampus Lindholm later in the season.
NHL・3 DAYS AGO

The New York Islanders will look to get back in the win column on Saturday, but there are plenty of questions abound about the team. Zdeno Chara has struggled early with the Islanders and the second line was called out by Barry Trotz. All these stories and more in today’s...
NHL・1 DAY AGO
Sportsnaut

EditorsNote: 10th graf, last sentence changes for correction. Connor McDavid notched a hat trick, and Jesse Puljujarvi collected a goal and two assists to lead the host Edmonton Oilers to a 5-2 victory over the Calgary Flames on Saturday. Derek Ryan also scored in the win and goaltender Mike Smith...
NHL・7 DAYS AGO
chatsports.com

The New York Rangers and top center Mika Zibanejad have agreed to an eight-year contract worth $68 million. Zibanejad, 28, will count $8.5 million against the salary cap beginning next season and through 2029-30. He was a point-a-game player last season with 24 goals and 26 assists in 50 games.
NHL・13 DAYS AGO

DENVER (KXRM) — The Colorado Avalanche have signed 15-year National Hockey League defenseman Jack Johnson to a one-year contract, the team announced Saturday. Adrian Dater of Colorado Hockey Now initially reported the signing Saturday. “Jack is a veteran defenseman that we brought into camp to help shore up our depth on the back end,” Avalanche Executive […]
NHL・13 DAYS AGO
Sportsnet.ca

The New Jersey Devils have signed forward Jimmy Vesey to a one-year, $800,000 deal after participating in the club's training camp on a professional tryout, according to Sportsnet's Elliotte Friedman. Vesey, 28, won the Hobey Baker Award as the top men's NCAA Hockey player in 2015-16, but his NHL career...
NHL・14 DAYS AGO
chatsports.com

CHICAGO -- The Blackhawks brought back Erik Gustafsson on Monday, agreeing to a one-year contract with the free-agent defenseman. Gustafsson was released by the New York Islanders on Sunday. The deal with Chicago is worth $800,000. The return of Gustafsson bolsters the Blackhawks' blue line after they lost young defensemen...
NHL・12 DAYS AGO
NHL

TAMPA -- Jon Cooper signed a three-year contract extension Monday to remain coach of the Tampa Bay Lightning through at least the 2024-25 season. Cooper guided the Lightning to consecutive Stanley Cup championships the past two seasons. They will try to become the first team to win at least three in a row since the New York Islanders won four straight from 1980-83.
NHL・13 DAYS AGO