By Marc Malkin
Variety
28 days ago 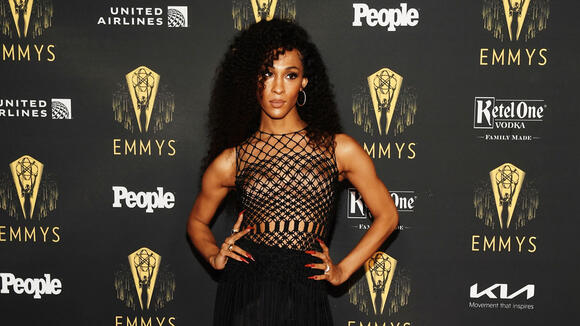 It may not have been as big and celebrity-filled as it usually is, but the TV Academy’s annual pre-Emmy party for performer nominees on Friday night was still a star-studded affair.

“Pose” star Mj Rodriguez , who goes into the Emmys on Sunday as the first trans woman to be nominated for an Emmy in a lead acting category, said she has been receiving a steady stream of texts from co-stars Billy Porter (who is also nominated) and Indya Moore since the start of the weekend. “I just want to constantly keep making that change,” Rodriguez told me on the red carpet. “I want to constantly keep making history. I want to be at the front of change.”

Rodriguez said she is proof that trans women are making inroads in Hollywood. “I am testimony that it is possible,” she said. “There’s no excuses. The door is wide open and you can run right through it. There’s no crack. There’s no slipping in.”

She acknowledges that there are plenty of trans women who helped pave the way for her success. “I’m glad I could be the one who held [the door] open a little longer,” Rodriguez said.

Kathryn Hahn, nominated for her work as Agatha on “WandaVision,” told me she isn’t writing an acceptance before the ceremony. “Oh, god no!” she exclaimed before explaining that she was happy the cast of the Disney Plus show will finally be able to celebrate the show’s success together and in-person. “[Agatha] is the part like when you’re a little kid saying, ‘I’m going to be an actor,’” Hahn said of her work on the show. “This is the kind of part you dream about when you’re a little kid.”

“Ted Lasso” star Hannah Waddingham said the cast and crew of the Apple TV Plus show will toast their 20 noms — whether they win or lose — with drinks. A lot of drinks.

“We’re English. Do you think we’re going to get probably quite drunk afterwards? Yes, yes, yes,” she said. “Knowing us lot, it’ll probably be like margaritas coming out of our eyeballs.”

Proof of full vaccination was required to attend the Friday night party. Press on the carpet as well as publicists and event staff also had to wear masks. The menu included chicken sliders, salmon, noodle dishes and mini fruit pies.

Dave Chappelle is courting controversy with his new Netflix special, while Hollywood is entering a major crisis of its own: the impending IATSE strike, which can shutdown showbiz. Meanwhile, award season is heating up with some buzzy contenders, as the box office is ready to take a stab with “Halloween Kills.”
MOVIES・1 DAY AGO
Variety

Oscar Isaac is one of the hottest actors working in Hollywood, showcased by his distinct and invigorating performances in films such as “The Card Counter” from Paul Schrader, “Dune” from Denis Villeneuve and “Scenes from a Marriage,” the limited series that just completed its run on HBO. Knowing firsthand about the hustle of making it in Hollywood, both as a Latino and wanting to “be seen” by his peers, he’s mindful of choosing projects and keeping his family first and foremost.
MOVIES・1 DAY AGO
Variety

Will The Athletic Find a Buyer?

The Athletic may have reached 1 million subscribers last September after launching roughly four and a half years prior, but the digital sports-news hub’s future is still far from certain. That’s according to The Information, which reported last week that The Athletic has enough cash to cover its needs for...
ECONOMY・5 DAYS AGO

Ted Lasso wrapped up its first season last summer as a buzzy new comedy, with early followers encouraging their friends and family to get hooked on the feel-good show, which stars series creator Jason Sudeikis as the titular American football coach, who gets recruited to move across the pond and helm a Premier League club.
TV & VIDEOS・8 DAYS AGO
International Business Times

Emmy Rossum has chosen to turn the other cheek after her former “Shameless” co-star Emma Kenney made some shocking accusations against her. Kenney, 22, recently threw some shade at Rossum, 35, when she dropped by the “Call Her Daddy” podcast Wednesday to talk about the Showtime series, which wrapped up in April after 11 seasons.
CELEBRITIES・1 DAY AGO
Variety

Will Packer will produce the 94th Oscars. He takes the reins of the show at a time when the broadcast and those of other awards shows are struggling to remain relevant. Last year’s telecast, which took place in the shadow of the COVID pandemic and at a time when the global box office was a shadow of itself, drew 9.23 million viewers, a 51% drop from the 18.69 million who tuned into the program in 2020. It represented a new low in viewership. Packer has shown a deft touch identifying and producing projects that are broadly commercial. His credits include “Girls...
MOVIES・10 DAYS AGO
GoldDerby

With her powerful performance in Fran Kranz’s directorial debut “Mass,” Ann Dowd is hoping to continue a trend at the Oscars in which recent Emmy winners also take home the Academy Award for supporting actress. If Dowd is successful, she would be the fifth woman in six years to do it, following in the footsteps of Laura Dern, Regina King, Allison Janney and Viola Davis. Dern is the most recent Emmy/Oscar winner, having won an Emmy in 2017 for Best Limited Series/TV Movie Supporting Actress for “Big Little Lies” and later winning the Oscar for her turn in Netflix’s “Marriage Story” (2019)....
CELEBRITIES・2 DAYS AGO

S to the AG: The ‘Succession’ cast looks good to finally get their first nominations (and wins?) from their fellow actors

The Roys are coming for the Screen Actors Guild. “Succession,” the popular HBO drama about the inner workings of a wealthy, dysfunctional family that owns and operates a major media conglomerate, is the current favorite to win the TV drama ensemble honor at the 28th Annual Screen Actors Guild Awards, which will be held in February. The show sits in first place in Gold Derby’s combined odds, which is surprising only because the guild has yet to acknowledge the show even exists. Created by Jesse Armstrong, “Succession” was lauded by critics in its first season but really started to break out...
MOVIES・22 HOURS AGO
idownloadblog.com

On a pretty regular basis, Apple TV+ gives us a behind the scenes look at the various productions the streaming service has on tap. That includes plenty of interviews with the cast and crew of the hit comedy series Ted Lasso. But this one, featuring Hannah Waddingham and Juno Temple, is a bit different.
TV & VIDEOS・7 DAYS AGO
World Star PR News

As The Simonetta Lein Show premiers its 4th season premiere, the show welcomes critically acclaimed and multi-academy award nominee, American actor, Eric Roberts! Eric has starred in countless films, a trend quite consistent with his sister, Julia, and, daughter, Emma. As with many artists, Eric's proudest accomplishments transcend that of his professional and creative career, being his family and real-world contributions. He joined Simonetta on the show to discuss the extreme evolutions of movie production over the decades, his passions behind the Natural Child Project, and even some of his most favored books, which he recommends all audiences to read. It is a hit segment you will not want to miss, aired exclusively on IGTV...Tune In 📺✨ #SLTV.
10 DAYS AGO
UPI News

RALEIGH, N.C. — One graduate from NC State University is making major moves while producing an award-winning show. The seven-time Emmy Award-winning show which airs on Apple TV+ is a comedy about an American football coach hired by an English football team. The show captivates laughter and messages of kindness...
TV & VIDEOS・7 DAYS AGO
Variety

Peter Roth started his career in show business fresh out of Tufts University with the dream of becoming another Harold Prince or Joe Papp in theater. He couldn’t have known back in 1973 that he was destined to become the Peter Roth of television executives. “If you had a problem, you called Peter. If you needed advice, you called Peter. If you were wondering if you were doing your job well, Peter would beat you to the punch and call you, singing your praises, building you up and making you feel good,” says Julie Plec, a showrunner who worked with Roth...
CELEBRITIES・1 DAY AGO
MovieWeb

One of the last greats of Hollywood's Golden Age, Jane Powell has died at the age of 92. The all round singer, dancer and actress was best known for appearing in a number of musicals back in the 1950s including Royal Wedding and Seven Brides For Seven Brothers. In later years, she appeared on TV in numerous roles with her most notable performance coming in the sitcom Growing Pains in the late 1980s. Being one of the last of her generation, the industry loses an icon from the past that helped inspire many other generations, and will no doubt continue to do so in the future.
MUSIC・28 DAYS AGO
talesbuzz.com

Lourdes Leon felt ‘so awkward’ at the Met Gala

Lourdes “Lola” Leon may have graced the cover of Vogue, but that doesn’t mean that the Met Gala was her “vibe.”. Madonna’s daughter, 25, said in a new Interview Magazine cover story that she felt “so awkward” at the fashionable fete. “Did I have fun at the Met Gala? I’m...
BEAUTY & FASHION・1 DAY AGO
hotnewhiphop.com

Jay-Z and Beyoncé are on the verge of making history -- again. After appearing together in a gawdy Tiffany & Co. ad campaign in which Hov and Bey dive all the way into lavishness and elegance, music's most notable and most important power couple could end up competing against each other.
MUSIC・9 DAYS AGO
Hello Magazine

Wow! George Stephanopolous has just announced some major news about his future and he's got the backing of his longtime wife, Ali Wentworth. The Good Morning America host is launching his own production company with ABC News and Ali shared the exciting move on Instagram. She proudly shared the exclusive...
CELEBRITIES・2 DAYS AGO
digitalspy.com

The Conners spoilers follow. The Conners aired a lovely episode last night (October 13) in the US, as Louise Goldufski became part of the family by marrying Dan Conner. But it wasn't all plain sailing, as a tornado threatened to completely derail the day. Thankfully, Jackie Harris stepped in and pronounced them husband and wife.
CELEBRITIES・2 DAYS AGO
thefocus.news

Actor, comedian and rapper Ricarlo Flanagan has died aged 40. The news was confirmed by Flanagan’s agent Stu Golfman of KMR Talent on 12 October 2021. In light of the news that Ricarlo’s death resulted from covid-19 complications, fans have wondered whether Ricarlo Flanagan was vaccinated against the virus. Who...
PUBLIC HEALTH・3 DAYS AGO