By Reuters
Reuters
29 days ago 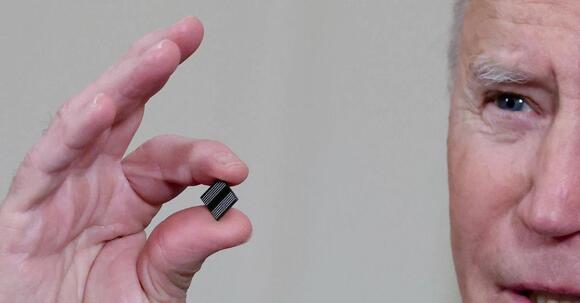 TOKYO, Sept 18 (Reuters) - Leaders of the United States, Japan, India and Australia will agree to take steps to build secure semiconductor supply chains when they meet in Washington next week, the Nikkei business daily said on Saturday, citing a draft of the joint statement.

U.S. President Joe Biden will host a first in-person summit of leaders of the "Quad" countries, which have sought to boost co-operation to push back against China's growing assertiveness. read more

The draft says that in order to create robust supply chains, the four countries will ascertain their semiconductor supply capacities and identify vulnerability, the Nikkei said, without unveiling how it had obtained the document.

The statement also says the use of advanced technologies should be based on the rule of respecting human rights, the newspaper said on its web site.

The draft does not name China, but the move is aimed at preventing China's way of utilising technologies for maintaining an authoritarian regime from spreading to the rest of the world, the Nikkei said.

The United States and China are at odds over issues across the board, including trade and technology, while Biden said in April his country and Japan, a U.S. ally, will invest together in areas such as 5G and semiconductor supply chains. read more

No officials were immediately available for comment at the Japanese foreign ministry.

We are humans not robots they can shove all those chips up the crack of they *** we are living in the in time and please don’t be fooled getting a chip implanted in you or you can never enter the kingdom of heaven... Revelations

Biden, by his own admission had his head cut off twice. Maybe the enemy planted some evil chips in there, that is the only explanation for his behavior. Vote Trump Red as if your life depends on it, IT DOES.

And it starts to come into focus a little clearer. They are basically admitting they planned all of this on a global scale for this very purpose. There is no theory but it is a Conspiracy!! Watch and learn.

The leaders of Japan and South Korea spoke by phone on Friday, saying they would look to deepen ties in the face of regional security threats, despite badly strained bilateral relations.Although they share a key ally in the U.S. and common concerns over facing China, ties between Tokyo and Seoul have suffered over the legacy of Japan's World War II atrocities and disagreements over compensation for wartime Korean laborers during the Japanese occupation. Japan's new prime minister, Fumio Kishida, only spoke with Korean President Moon Jae-in after he'd spoken with a number of other world leaders, underlining chilly relations...
POLITICS・2 DAYS AGO
Business Insider

Conservatives take to social media to blame Biden for the supply chain crisis with #BareShelvesBiden, while others hit back with images of fully stocked stores

Bottleneck at U.S. Ports snarls supply chain across the country

WICHITA, Kan. (KWCH) - Prepare to look harder and earlier for those Christmas presents this year, as supply chain delays threaten to thin out the number of gifts under the tree. It’s a lingering impact of the COVID-19 pandemic and is expected to last into next year. For businesses in...
2 DAYS AGO
Variety

Tech giant Microsoft has withdrawn its LinkedIn professional social media service from mainland China, citing the difficulties of compliance in the Middle Kingdom. The move marks the withdrawal of the last major western social media operation in China, where the Communist government is simultaneously pushing back against tech firms, private capital and western influence. The Chinese government is in the process of pushing tech firms out of the news business, even in seemingly uncontroversial areas as sports. “We’re also facing a significantly more challenging operating environment and greater compliance requirements in China,” LinkedIn explained on its corporate blog. “Given this, we’ve made the...
INTERNET・2 DAYS AGO

Despite the fact that the economy is eager to recover from the brutal effects of the COVID-19 pandemic, supply chain issues continue to slow down economic growth worldwide. From shipping and container disruptions to the truck driver shortage, a series of forces have been hampering the speed at which goods are manufactured and delivered.
INDUSTRY・4 DAYS AGO
wpsdlocal6.com

Biden talks efforts to relieve supply chain crisis, including '90-day sprint' to clear backlogs. In a speech Wednesday, President Joe Biden announced the Port of Los Angeles will move to 24/7 service, bringing it into line with operations at the Port of Long Beach, which is already working on a 24/7 schedule. Those two ports handle 40% of container traffic in the US.
U.S. POLITICS・3 DAYS AGO
MSNBC

'Eventually this will have an impact on the safety and security of our country': Lt. Gen. Russel Honoré on supply chain issues

Many retailers are warning of a possible hike in prices as supply chain problems persist. NBC's Geoff Bennett is joined by former Commander of Joint Task Force Katrina Lieutenant General Russel Honoré and NPR's "Full Disclosure" host Roben Farzad to discuss the backlog and what the White House can do to solve the issues.Oct. 13, 2021.
U.S. POLITICS・3 DAYS AGO
quillette.com

For a generation, the Long Beach and Los Angeles harbors in California handled more than 40 percent of all container cargo headed into the US and epitomized the power of a globalizing economy. Today, the ships—mostly from Asia—still dock, but they must wait in a seemingly endless conga line of as many as 60 vessels, sometimes for as long as three weeks. These are the worst delays in modern history, and the price per container has risen to as much as 10 times its cost before the pandemic. The shipping crisis is now projected to last through 2023.
INDUSTRY・3 DAYS AGO

The Global Supply Chain is Collapsing

Over the past 18 months, I’m betting there isn’t a single person who hasn’t been affected by supply chain issues. From toilet paper to home appliances to semiconductor chips, it has become obvious that the global supply chain we have blindly depended on for so long is collapsing. Today we’re experiencing a period of massive changes to the way everything once worked. Ultimately, and for reasons to be explained here, the collapsing supply chain is good news for America.
ECONOMY・5 DAYS AGO
Washington Post

There Is No Shortage of Reasons for the Broken Supply Chain

Free trade with China is over for the United States

In the summer of 1915, during the first year of World War I, a British official from the Ministry of Mansion settled in Switzerland. Objective: To enter into a transaction from neutral territory, the Germans, in other words, would provide the enemy with a military telescope that the British did not have. London, sending rubber from the tropics, the Germans – those with some colonies – were in disbelief.
FOREIGN POLICY・8 DAYS AGO
The Guardian

There is growing pressure on the new Aukus partners to scrap plans to use weapons-grade uranium on submarines. A group of former US officials and experts has written to the US president, Joe Biden, warning the deal could threaten US national security by encouraging hostile nations to obtain highly enriched uranium (HEU).
MILITARY・10 DAYS AGO

Robert D. Kaplan holds the Robert Strausz-Hupé Chair in Geopolitics at the Foreign Policy Research Institute. He is the author of “Monsoon: The Indian Ocean and the Future of American Power,” and “Asia’s Cauldron: The South China Sea and the End of a Stable Pacific.”. Culture and tradition matter. The...
FOREIGN POLICY・25 DAYS AGO
Business Insider

Putin told the CNBC reporter Hadley Gamble that she didn't seem to understand him when she asked him about a Russia-Europe standoff over gas supply.
GAS PRICE・2 DAYS AGO
AFP

US Secretary of State Antony Blinken will visit Colombia and Ecuador next week as he seeks to showcase democracy in Latin America, the State Department said Friday. It will be Blinken's third visit to Latin America since the Biden administration took office in January after stops in Mexico and Costa Rica. sct/ec
U.S. POLITICS・2 DAYS AGO
Reuters

MANILA (Reuters) - China has opposed a Philippines-led push for a review of its 70-year-old defence treaty with the United States, Manila’s defence minister said on Thursday, concerned that it could be seen in Beijing as an effort to contain its rise. The Philippines is keen to amend the 1951...
POLITICS・17 DAYS AGO

A new book from an investigative Australian reporter dives into how Dr. Anthony Fauci reportedly misled the Trump administration on gain-of-function research in China. "Fauci’s public persona as a cautious, careful medical professional is contradicted by his central role in kickstarting exceptionally fraught gain-of-function research in the United States after the ban introduced in the Obama era, along with his role in funding coronavirus research in China in unsafe laboratories. Laboratories that intelligence agencies suspect may have sparked the pandemic," Sharri Markson details in her new book, "What Really Happened In Wuhan."
POTUS・3 HOURS AGO
Newsweek

A bitter transatlantic rift is over, the European Union's top diplomat declared Friday, a month after France was infuriated with the United States over losing a massive submarine contract in Australia. France last month recalled its ambassadors, accusing the United States of deceit and Australia of backstabbing, after Canberra scrapped a multi-billion-dollar contract for French conventional submarines.
MILITARY・1 DAY AGO