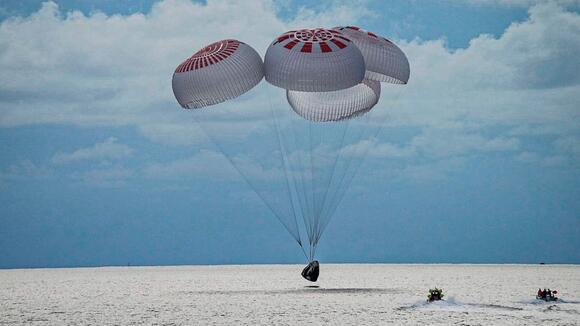 The Dragon capsule returned to Earth just after 7 p.m. ET.

The capsule was traveling at 17,500 mph when it deorbited, slowed down to around 350 mph when the parachute deployed at 18,000 feet and slowed to 119 mph before it hit the ocean.

It splashed down in its preferred location in the Atlantic Ocean off the coast of Cape Canaveral. They had been prepared to pivot to the Gulf of Mexico, if needed.

SpaceX's Inspiration4 mission made history as the farthest any civilian has traveled from Earth -- 367 miles above it -- even farther than the International Space Station.

There is always risk launching into space and coming home. While the crew has been trained by SpaceX , they are not professional astronauts.

Saturday's splashdown was the third SpaceX Dragon-crewed capsule to splash down from orbit, but the first with no professional astronaut on board.

Billionaire Jared Isaacman, 38, an experienced pilot, is commanding the mission. He founded a payment process company called Shift4 Payments and purchased all four seats on the flight for an estimated $220 million.

After the crew's return, SpaceX founder Elon Musk said on Twitter he would chip in $50 million to the fundraising goal for St. Jude as well.

Isaacman reserved one seat for 29-year-old St. Jude ambassador Hayley Arceneaux. Arceneaux was treated at St. Jude as a child and returned to work there as a physician assistant. She is now the youngest American to go to space as well as the first pediatric cancer survivor.

Dr. Sian Proctor, 51, the third occupant, made history as well as the fourth African American woman astronaut to travel into space.

Rounding out the crew was Chris Sembroski, 41, an Iraq war veteran and engineer with Lockheed Martin.

They all spoke with children currently being treated at St. Jude live from space on Friday.

"What kind of sleeping bag do you have?" one child asked Arceneaux.

"So if you've ever been camping, we pretty much have those same kind of sleeping bags," she said. "We were in our sleeping bags on top of our chairs, but we were floating on top of the chair and we had a seat belt around our sleeping bag. So we didn't fly away when we were sleeping."

"Can you take pictures in space?" another child asked Proctor.

"We absolutely can take pictures in space," she responded. "And we've been taking a lot of those pictures and video so we can capture this moment and share it with everybody when we come home."

Since liftoff, the mission has raised an additional $500,000 for the research hospital.

The crew has also been busy conducting experiments including using a portable ultrasound to measure their corneas and optic nerves for indications on intracranial pressure.

"We've also been taking several swabs of different parts of our body to evaluate the microbiome and how that changes in these three days in space," Arceanaux said.

Crew-3 astronauts arrive on Space Coast ahead of SpaceX launch

Oct. 25 (UPI) -- The Mars helicopter Ingenuity has successfully performed a short Martian flight to test summer weather conditions at its location on the Red Planet, NASA announced Monday. The flight, Ingenuity's 14th, was brief and simple by design. As weather at Jezero Crater gets warmer, the aircraft's rotors...
AEROSPACE & DEFENSE・1 DAY AGO
Space.com

SpaceX's next crewed launch for NASA will launch four astronauts to the International Space Station on the Crew-3 mission on Oct. 31 Liftoff is set for 2:21 a.m. EDT (0621 GMT). Known as Crew-3, the mission will mark SpaceX's fourth crewed spaceflight and will ferry NASA astronauts Raja Chari, Tom Marshburn, Kayla Barron and European Space Agency Matthias Maurer on a six-month mission to the space station.
AEROSPACE & DEFENSE・13 HOURS AGO
The Independent

SpaceX will launch its next-generation Starship SN20 rocket next month after successfully testing its deep space Raptor Vacuum engine, Elon Musk has confirmed.The launch will be the first orbital flight for the Mars-bound craft, which is being built to transport people and cargo around the Solar System.Previous Starship prototypes have performed high-altitude flight tests from SpaceX’s Starbase facility in Boca Chica, Texas, but the next stage of development requires a massive Super Heavy rocket in order to propel it to orbit. The November test will see Starship SN20 launch from Starbase before separating from the booster rocket and touching down...
AEROSPACE & DEFENSE・1 DAY AGO

The astronauts who will fly on NASA’s SpaceX Crew-3 mission to the International Space Station are now on their way to the agency’s Kennedy Space Center in Florida, where they will begin final preparations for launch. NASA astronauts Raja Chari, Tom Marshburn, and Kayla Barron, along with ESA (European Space...
AEROSPACE & DEFENSE・8 HOURS AGO
Quad-Cities Times

NASA and SpaceX count down to Halloween launch

Crew Dragon versus Starliner: How the Boeing and SpaceX spacecraft compare

Crew Dragon and the Starliner. Two space capsules, both alike in dignity, but with plenty of differences between them, starting with their manufacturers — SpaceX and Boeing. But let’s start with the similarities: The two spacecraft are both reusable space capsule designs capable of seating up to seven crew and ferrying cargo to low Earth orbit and the International Space Station (ISS). Boeing and SpaceX are also both contractors under NASA’s Commerical Crew Program.
HAWTHORNE, CA・5 HOURS AGO
CBS 42

SpaceX is taming some toilet troubles in its capsules before it launches four more astronauts.
TUSCALOOSA, AL・10 HOURS AGO

The moon is sitting there in the night sky, silently beckoning humanity to come back for another visit. It's been decades, but NASA is determined to return. First, the space agency needs to launch a successful Artemis I moon mission, and we now have a new target for that: February 2022.
AEROSPACE & DEFENSE・1 DAY AGO
Space.com

SpaceX is hoping to launch its first orbital Starship test flight in the next few months from its Starbase facility in Texas and a new video captures the company's work so far on the massive rocket. The 90-second montage, which SpaceX showed off on Twitter, offers views of the company's...
AEROSPACE & DEFENSE・1 DAY AGO
Legit Reviews

SpaceX is gearing up for its next major mission, which is the Crew-3 mission will be conducted with NASA. Astronauts will utilize a new SpaceX Crew Dragon capsule for the mission. Crew-3, as its name suggests, is the third operational launch and second crew rotation mission for SpaceX. The mission...
AEROSPACE & DEFENSE・12 HOURS AGO
Digital Trends

Just a few days before SpaceX launches four more astronauts to space, NASA has released a trailer highlighting the mission. You can watch it below:. The Crew-3 astronauts heading to the International Space Station (ISS) on Sunday, October 31, are NASA’s Raja Chari, Tom Marshburn, and Kayla Barron, along with Matthias Maurer from the European Space Agency.
AEROSPACE & DEFENSE・22 HOURS AGO

Station Gets Ready for Russian Cargo and SpaceX Crew Missions

The seven-member Expedition 66 crew is getting ready for a Russian cargo mission and the arrival and departure of two commercial crews over the next several days. Nevertheless, a host of advanced space research is ongoing today aboard the International Space Station keeping the orbital residents busy and focused. Russia’s...
AEROSPACE & DEFENSE・5 HOURS AGO
NASA

Russian cosmonauts will be allowed to fly to the International Space Station on SpaceX's Crew Dragon space capsule in the future as the technology has now proved to be sufficiently safe and reliable. The director of Russia's space agency Roscosmos Dmitry Rogozin made such remarks during a press briefing at...
AEROSPACE & DEFENSE・6 HOURS AGO
Ars Technica

Although Firefly Aerospace is only a few weeks removed from its first-ever launch attempt, the Texas-based space company is already making good progress toward its first mission to land on the Moon. Firefly said Monday that it has completed the "critical design review" phase of its program to develop a...
AEROSPACE & DEFENSE・1 DAY AGO

Right on schedule, SpaceX has rolled a new Crew Dragon spacecraft to the pad for its first astronaut launch. Known as Crew-3, the mission – SpaceX and NASA’s third operational astronaut launch and second ‘crew rotation’ – is scheduled to launch as early as 2:21 am EDT (06:21 UTC) on Halloween (Sunday, October 31st) after a minor one-day delay. In lieu of an operational alternative from Commercial Crew partner Boeing, whose Starliner spacecraft remains chronically delayed, that means that a SpaceX Crew Dragon will again join a second Crew Dragon already docked to the International Space Station (ISS), freeing up four NASA, ESA, and JAXA Crew-2 astronauts for their return to Earth after more than half a year in orbit.
AEROSPACE & DEFENSE・16 HOURS AGO
SpaceRef

Life science and spacewalk preparations are just part of the busy schedule aboard the International Space Station today. The seven-member Expedition 66 crew is also gearing up for a Russian cargo mission and a commercial crew swap taking place over the next two weeks. NASA Flight Engineer Megan McArthur joined...
AEROSPACE & DEFENSE・4 HOURS AGO
Space.com

CAPE CANAVERAL, Fla. — NASA's next astronaut crew is set to launch to the International Space Station on Sunday (Oct. 31), marking the third operational crewed flight of SpaceX's Crew Dragon spacecraft. The mission, called Crew-3, is slated to lift off before dawn on Oct. 31 from Pad 39A at...
AEROSPACE & DEFENSE・12 HOURS AGO
Vice

Jeff Bezos has turned his wealth from Amazon into a play for space. He's already gone to the edge of space in one of his own Blue Origin rockets and broken the record for sending the oldest person ever into space, twice. Now, Blue Origin has announced plans to build a commercial space station called Orbital Reef.
AEROSPACE & DEFENSE・1 DAY AGO