A pregnant woman who was kicked in the belly by the Taliban has been released from Afghanistan, US rep says 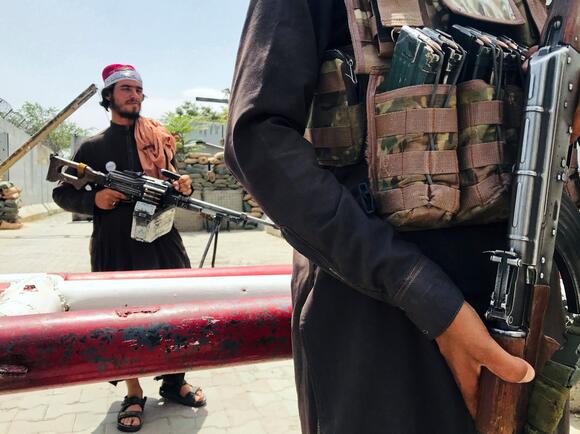 The Taliban has released a 25-year-old pregnant US citizen from Afghanistan, a US rep from California said on Friday.

The woman, identified only as Nasria, is from California and has been stranded in Kabul for several weeks. Rep. Darrell Issa in a press release said she's returning to the United States.

During an appearance on Fox News earlier this month, Issa said Taliban fighters had kicked Nasria in the belly.

"She was beaten by the Taliban and kicked in the belly and has been in hiding," Issa said.

Nasria had originally flown to Afghanistan in June to get married and visit her family. She became trapped as Kabul fell to the Taliban. And in an interview with Voice of America, she said the Taliban is " hunting Americans ."

"Apparently they're going door-to-door," she said, "trying to see if anybody has a blue passport."

Nasria was one of hundreds of Americans the United States was trying desperately to evacuate after the fall of Kabul.

The Taliban took over Afghanistan swiftly after the decision to withdraw all US forces from the area. Since then, crowds of fearful Afghans and Americans alike anticipating violence and turmoil have been seeking a way out.

The United Nations has warned that widespread poverty is also imminent.

Issa's office said Nasria's husband will be left behind in Afghanistan.

"We continue to work around the clock to ensure hundreds of American citizens stranded in Afghanistan are able to escape," Issa said. "Nothing ends until our community is once again reunited with loved ones."

another Biden lie comes out about Afghanistan still people blame trump. I don't know who to feel sorry for the American citizens left behind in Afghanistan or the citizens here that believe Biden.

The Taliban are playing games with us and Biden and his administration are falling for it lock stock and barrel.

20 years, 4 presidencies. You would think these 75k Taliban would be no problem for the most powerful military in the world. Alas, our military and so called "leaders" are far more adept at killing innocent civilians rather than enemy combatants.

Young Afghan woman, separated from family in US, pleads for help getting out

(WASHINGTON) — “I’m in danger,” the daughter cried to her father from thousands of miles away in Afghanistan. “We cannot go outside with friends. Before, we were going outside to restaurants, shopping, but now we are like prisoners in our own home,” she said, her voice full of fear, saying Taliban fighters might find her.
RELATIONSHIPS・1 DAY AGO
hngn.com

In many regions in northern Afghanistan, the Taliban have permitted middle and high-school girls to continue their education, demonstrating how the Islamist group's stances on critical subjects are impacted by cultural variations within the nation. The Taliban reopened secondary schools for male students across Afghanistan in September but made no...
WORLD・5 DAYS AGO
The Independent

A large explosion tore through a Shi’ite mosque in Afghanistan’s southern city of Kandahar during Friday prayers, causing heavy casualties, a spokesperson from the Taliban government’s interior ministry said.Qari Saeed Khosti said authorities were gathering details of the explosion, which happened days after Isis claimed a bombing at another Shi’ite mosque in the northern city of Kunduz.Nematullah Wafa, a former member of the local provincial council, said the blast occurred at the Imam Bargah mosque and caused heavy casualties. At least seven people are thought to have been killed and a further 13 injured, but these figures appeared likely to...
PUBLIC SAFETY・3 DAYS AGO
Fox News

The Pentagon has offered condolence payments to the surviving family members of the 10 innocent civilians, including seven children, who were accidentally killed in a U.S. airstrike in Afghanistan in late August. The Aug. 29 strike was intended to kill ISIS-K-affiliated terrorists in retaliation for a terrorist bombing three days...
MILITARY・2 DAYS AGO

BEIJING — In 1961, Muhammad's then-teenage parents loaded as many belongings as they could onto yaks and horses, then set off walking toward the snow-tipped Pamir mountains. Their destination: Afghanistan. They were among hundreds of Uyghurs who have fled northwest China's Xinjiang region to Afghanistan since the 1950s. The Uyghurs,...
WORLD・2 DAYS AGO
Fox News

Newbury dad lied to Taliban to rescue his family from Kabul

A father has described how he lied to Taliban guards to get into Afghanistan to rescue his family and saw British passports destroyed at Kabul Airport. Mansoor Khan arrived in the UK 10 years ago and has a British passport. But his wife and one-year-old daughter lived in Kabul until...
WORLD・6 DAYS AGO
New York Post

The Biden administration is looking into exempting some Afghan civil servants who worked for the Taliban government in 1996-2001 from terrorism-related bans that would keep them from entering the United States, according to a new report. A draft US Citizenship and Immigration Services planning document reviewed by Fox News revealed...
FOREIGN POLICY・3 DAYS AGO

An Afghan interpreter who helped rescue Joe Biden in 2008, Aman Khalili, finally escaped Afghanistan with the help of U.S. veterans after hiding for weeks in fear for his life. Khalili appeared on "Fox & Friends First" describing the dangers for U.S. allies in the war-torn nation amid the Taliban's "crackdown policies."
POLITICS・5 DAYS AGO
Fox News

President Biden and his administration are planning to send American taxpayer money to Afghanistan as the economy continues to tank back home with record inflation, gas prices rising, and supply-chain chaos, Sean Hannity said Tuesday during his opening monologue – adding that many Americans are beginning to publicly show their frustration with the White House.
PRESIDENTIAL ELECTION・5 DAYS AGO
USNI News

The Taliban is struggling to govern a drastically changed country in Afghanistan, the nation’s ambassador to the United States said Wednesday. The difficulties range from a massive humanitarian crisis affecting 18 million Afghans who lack food and medical care to an economic collapse that has closed markets across the country and a festering ISIS terror campaign, Adela Raz said during a Center for New American Security online forum.
U.S. POLITICS・3 DAYS AGO
Business Insider

US Marine who slammed the Afghanistan withdrawal in viral video plans to plead guilty, lawyers say

Lt. Col. Stuart Scheller is hoping to avoid jail time and receive a discharge that would let him keep some military perks, per The Washington Post.
MILITARY・5 DAYS AGO

FIRST ON FOX: A top House Republican is warning of an "urgent" terrorist threat to the United States after the Taliban's release of thousands of prisoners from Bagram Air Base in Afghanistan, including the ISIS-K suicide bomber that killed 13 U.S. service members, suggesting that those released prisoners could attempt to enter the country through the "porous southern border," and demanding answers from the Biden administration on its plans to quell that threat.
CONGRESS & COURTS・3 DAYS AGO
Fox News

Good morning and welcome to Fox News First. Here's what you need to know as you start your day. Biden admin plans to exempt some Taliban-era Afghan civil servants from US terror-related entry restrictions. The Biden administration is planning to allow some Afghan civil servants who were employed by the...
FOREIGN POLICY・4 DAYS AGO
WashingtonExaminer

The FBI believes the Taliban’s takeover of Afghanistan is pushing Americans toward acts of violence.
PUBLIC SAFETY・5 DAYS AGO
WTNH

Suicide bombers attacked a Shiite mosque packed with worshippers attending Friday prayers in southern Afghanistan, killing at least 37 people and wounding more than 70, according to a hospital official and a witness.
PUBLIC SAFETY・3 DAYS AGO

Seventeen-year-old Israr was fast asleep when his phone rang. It was 2am and the teenager was exhausted. He'd been working all day as a guard. On the other end of the line was his brother, who told Israr that men had barged into their family house, dragged their father outside, and shot him dead.
WORLD・4 DAYS AGO
insider.com

With Afghanistan on the verge of economic collapse, the Taliban say the US has agreed to give humanitarian aid

ISLAMABAD — The US has agreed to provide humanitarian aid to a desperately poor Afghanistan on the brink of an economic disaster, while refusing to give political recognition to the country's new Taliban rulers, the Taliban said Sunday. The statement came at the end of the first direct talks between...
ADVOCACY・7 DAYS AGO
Newsweek

The Taliban Blames the U.S. for Afghanistan's Growing ISIS Problem

"There is no doubt that the malicious hand is behind the ISIS attack," Ahmad Yssir, protocol officer of the Taliban's political office in Qatar, told Newsweek.
POLITICS・5 DAYS AGO
FOXBusiness

Gen. Stanley McChrystal says Afghanistan a humiliation, but ‘civil war’ at home is of concern

Gen. Stanley McChrystal knows a thing or two about leadership and how sending the wrong messages can have serious repercussions. After spending more than 30 years serving in the U.S. military, where he oversaw countless combat operations, the four-star general resigned as commander of U.S. forces in Afghanistan during the Obama administration amid political fallout over a Rolling Stone article.
MILITARY・6 DAYS AGO