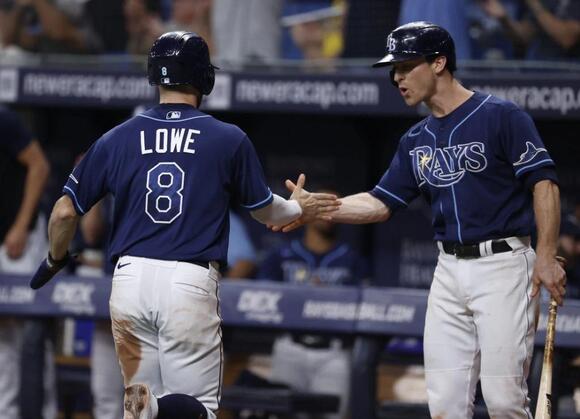 Brett Phillips blasted a three-run homer in the bottom of the 10th and the host Tampa Bay Rays rallied from a three-run deficit in the ninth to pull out a 7-4 victory over the Detroit Tigers on Friday in St. Petersburg, Fla.

Yandy Diaz had a two-run, pinch-hit single in the ninth. Tampa Bay starter Luis Patino gave up four runs on six hits in six innings, striking out four with one walk. Ji-Man Choi had two hits and a run scored for the American League East-leading Rays (92-56).

Akil Baddoo homered for Detroit. Harold Castro and Niko Goodrum each doubled, scored a run and drove in another for the Tigers (70-78).

Detroit starter Casey Mize, who is on an innings limit, gave up one run on three hits in three innings. He whiffed three and issued one walk.

Baddoo gave Detroit the lead with his 13th homer of the season on the third pitch of the game with his blast to right field.

Tampa Bay tied it in the bottom of the inning. Choi hit a one-out single, advanced to third on Randy Arozarena’s double and scored on Austin Meadows’ sacrifice fly.

The Tigers wasted little time regaining the lead, as they pushed across two runs in the second. Castro led off with a double and scored on Goodrum’s one-out double. Goodrum moved up on a Patino wild pitch and scored on Victor Reyes’ groundout.

Detroit made it 4-1 in the third. The Tigers loaded the bases as Robbie Grossman walked with one out, then Miguel Cabrera and Jeimer Candelario singled. Grossman scored on Castro’s sacrifice fly.

The Rays’ ninth-inning rally began when they loaded the bases with two singles and a walk against Gregory Soto. Diaz drove in two runs with a single and Arozarena tied it with a sacrifice fly.

Related: If you’re a fan of the Rays, check out #RaysBaseball rumors, rankings, and news here .

Wily Peralta was an afterthought signing this offseason but quickly became a reliable arm in the Detroit Tigers rotation. There were boundless concerns for pitchers heading into the 2021 season league-wide; particularly with starters. Due to a shortened 2020 season, many teams had to get creative about their approach to their rotation this year. For the Detroit Tigers, there were starters like Matthew Boyd and Spencer Turnbull that had significantly reduced innings, but there were also pitchers who didn’t pitch at all in 2020 aside from possibly some alternate site scrimmage work (think Matt Manning).
MLB・11 DAYS AGO
Daily Mail

Tampa Bay Rays minor league pitcher David Hess announced that he is starting chemotherapy to treat a cancerous tumor in his chest. The 28-year-old pitcher broke the news in a tweet titled 'Life update' accompanied by a note that said he discovered the diagnosis a week ago when he went to an emergency room after experiencing chest tightness and shortness of breath.
MLB・13 DAYS AGO
FanSided

There is much consolation when looking at the Tamp Bay Rays‘ ouster from the American League playoffs. Sure, they were beaten three games to one by the Boston Red Sox, but it took everything the Red Sox had to earn the victories. After splitting the first two games, the Rays battled the Red Sox through 13 innings in Game Three.
MLB・14 DAYS AGO
chatsports.com

BOSTON — Kiké Hernandez delivered Boston’s second straight walk-off win, scoring pinch-runner Danny Santana with a sacrifice fly in the ninth inning to send the Red Sox to the AL Championship Series with a 6-5 win over the Tampa Bay Rays on Monday night. After winning Game 3 of their...
MLB・15 DAYS AGO

David Hess, a pitcher within the Tampa Bay Rays organization, announced via Twitter on Wednesday that he has been diagnosed with a cancerous germ cell tumor in his chest. >> Subscribe to Sports Spectrum Magazine for more stories where sports and faith connect <<. “Life has a way of throwing...
BASEBALL・11 DAYS AGO
draysbay.com

Evil is triumphing over good all over the place in the LDS. The Braves knocked off the Brewers yesterday while Astros dispatched the White Sox. Meanwhile, late last night the Dodgers forced Game Five against the Giants. Game Five will be Thursday at 9:07 PM. “This is what baseball wants.”
MLB・14 DAYS AGO
chatsports.com

MEMPHIS, Tenn. – Now tied for third in the American Athletic Conference standings, the Memphis Tigers go for their fourth-straight win Friday at 6 p.m. CT at South Florida. Friday's match will be broadcast on ESPN+, and live stats are also available. Memphis (4-6-1, 3-2-0 AAC) is coming off a...
MEMPHIS, TN・13 DAYS AGO

"We're not going to let them use our wallets as an open bar," the Canadian Taxpayers Federation said.
MLB・1 DAY AGO
USA TODAY

Tampa Bay Rays DH Nelson Cruz was honored for his work off the field Wednesday as the 2021 recipient of the Roberto Clemente Award.
MLB・1 HOUR AGO
NJ.com

The 2021 World Series begins on Tuesday with Game 1 between the Houston Astros and Atlanta Braves at Minute Maid Park. Read our comprehensive how to bet on baseball guide. Over the weekend, Major League Baseball released the broadcast schedule for the Fall Classic:. Game 1: ATL @ HOU; Tues.,...
MLB・2 DAYS AGO
USA TODAY

'Mind-blowing what he just did': Tyler Matzek makes name for himself in leading Atlanta to World Series

Reliever Tyler Matzek saved Atlanta's season in shutting down Dodgers' rally. His story is one of redemption, his name once forgotten by his manager.
MLB・3 DAYS AGO
WXIA 11 Alive

ATLANTA — The Atlanta Braves are headed to the World Series after finishing off the Los Angeles Dodgers on Saturday night with a 4-2 win to win the NLCS 4-2, as well. It's the first time in 22 years the Braves will appear in the Fall Classic. The last time...
MLB・3 DAYS AGO
The Independent

Remember April, when Major League Baseball (MLB) pulled this year’s All-Star game from Georgia to protest the state’s new restrictive voting law? At the time MLB Commissioner Rob Manfred said, “I have decided that the best way to demonstrate our values as a sport is by relocating this year’s All-Star Game and MLB Draft. Major League Baseball fundamentally supports voting rights for all Americans and opposes restrictions to the ballot box.”But that was six months ago, an eternity in this country’s short attention span. Tonight’s opening game in the World Series between the Atlanta Braves and the Houston Astros will...
MLB・1 DAY AGO
ABC13 Houston

While Astros fans know the players, how well do you know their significant others? Meet the ladies supporting our guys on and off the field.
MLB・1 DAY AGO
WKBN

“To go out there and strike out the next guy with a broken leg, it blows my mind."
MLB・5 HOURS AGO
Los Angeles Times

Angels' Shohei Ohtani was honored with the Commissioner's Historic Achievement Award for his unprecedented two-way performance this season.
MLB・14 HOURS AGO
Sporting News

Dusty Baker carries quite a few accessories with him during games that he manages. He wears sweatbands up and down his arms, along with a Fitbit. He dons an Astros-themed mask for most of Houston's games. When Baker is taking a mask break, he habitually chews on a toothpick and...
MLB・1 DAY AGO