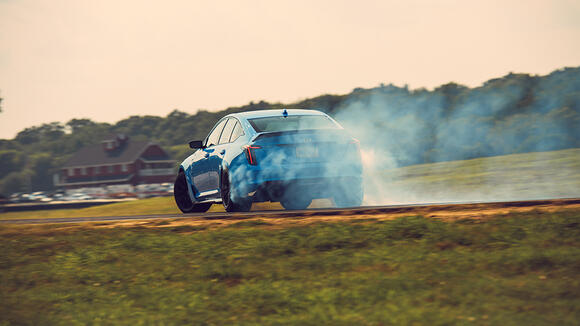 Once near-sacred fire-breathing hunks of rolling Americana, Detroit muscle cars are a fast-dying breed, considered a hard sell in an increasingly electrified future. Even Cadillac , which has been producing such brawn in a three-piece suit since it debuted the 400 hp manual-transmission CTS-V in 2004, is getting out of the game: The 2022 CT5-V Blackwing will be the brand’s farewell to tire-smoking, V-8 powered rear-drive sedans. Fittingly, though, that swan song is more of a furious roar. Starting at $84,990, the CT5-V Blackwing is Cadillac’s fastest production car to date, with a top speed of over 200 mph and a 3.6-second sprint to 60 mph. And, yes, it comes with a stick—standard.

While exiting pit lane at Virginia International Raceway (VIR), even a light brush of the throttle hints at the ballistic capability of Cadillac’s most potent engine ever made, the hand-built, 6.2-liter supercharged Blackwing V-8 with 668 hp and 659 ft lbs of torque. Managing all that brute force is the Tremec six-speed manual transmission, Michelin Pilot Sport 4S rubber, the automaker’s largest stock brakes and Cadillac’s next-generation Magnetic Ride Control system, which assesses conditions roughly a thousand times per second and makes suspension adjustments accordingly. (Sure, you can knock off 0.2 seconds from the zero-to-60 time—while adding 19 pounds—if you choose the optional 10-speed automatic transmission, but we suspect the Blackwing will appeal strongly to purists.) There’s even a No Lift Shift feature that allows full throttle while engaging the clutch.

On VIR’s straightaways, the exhaust note blasted all the right Motown sounds, and the four-door tackled NASCAR Bend and Left Hook corners with remarkable prowess. Around the sharp, tricky Oak Tree Curve, however, the sedan’s 4,123-pound heft made itself known; staying on the racing line there became a question with a seemingly different answer each lap.

The plush cabin belies the vehicle’s raw athleticism, with 18-way power seats, suede-and-carbon-fiber trim, a 10-inch touchscreen and a 16-speaker AKG sound system . But the interior isn’t what anyone will remember about the Cadillac CT5-V Blackwing. The lasting impression will be of a parting gift to gearheads, a car soon to be one more entry in another of motoring’s bygone eras, a brutal and slightly bonkers piece of fancy Detroit muscle with a throwback eight-cylinder heart. Deposits for the 250 introductory examples were reportedly placed within three minutes of the car’s reveal (and only a limited number in total are still available to order); those quick enough to snag one have snagged a rare beast indeed.

The new Porsche 718 Cayman GT4 RS isn’t scheduled to make its official debut until next month, but the marque apparently couldn’t wait to show it off. The luxury brand released the first official images of the range-topping variant on Wednesday. That wasn’t all the company had to share, though: It also offered up a glimpse of what the mid-engine sports car’s upgraded powertrain can do. That peek came courtesy of a video that features the production Cayman GT4 RS ripping around the Nürburgring-Nordschleife. “Ripping” is really the only way to describe the way the vehicle—which was piloted by brand ambassador and...
CARS・6 DAYS AGO
Robb Report

Collectors have just been gifted an opportunity to lasso one of the rarest Prancing Horses in recent history. The car in question is a pristine Ferrari 599 SA Aperta that has just been listed for auction via Paddlup. With less than 7,000 miles on the ticker, the 2011 rarity is one of only 30 such limited editions to roll off the line and sports an array of custom features that set it apart from fellow Apertas. First introduced at the 2010 Paris Motor Show, the roadster variant of the 599 was built in honor of the marque’s long-term design partner Carrozzeria Pininfarina....
HOME & GARDEN・6 DAYS AGO
Robb Report

Car of the Week: This Highly Coveted BMW ‘Batmobile’ Would Make the Caped Crusader Green With Envy

In the late 1960s and early 1970s, long before BMW became a mass-luxury brand name, the marque was known for building sporting cars that combined Bavarian frugality, solid German engineering and—if one squints one’s eyes and imagines—sober, attractive style. The automaker had shed its reputation for lavish antiquated barges like the model 502 “Baroque Angel” and the money-losing 507 sports car, and embarked on a new mission. Pivotal to the change in direction was the 1600 and 2002 series (an altogether longer and most interesting story). But BMW customers had a taste for sporting luxury that would never be sated by...
CARS・9 DAYS AGO
CNET

Yes, you read it right: Anyone can now purchase a Honda Civic Type R crate motor. Here's the bad news, though. It's still only available for racing and "off-highway" applications. But, nevertheless, this wonderful engine will be available to more enthusiasts than ever, looking to build their next wild racing machine.
CARS・1 DAY AGO

The Cadillac CT4-V Blackwing Is Pretty Good, But Not As Sporty Or Precise As The BMW M3

With the new CT4-V Blackwing and CT5-V Blackwing, Cadillac has put the likes of BMW M, Mercedes-AMG, and Audi Sport on notice, offering exceptional performance for much less money than their German rivals. The CT4-V Blackwing acts as the successor to the ATS-V and carries over the twin-turbocharged 3.6-liter V6...
CARS・10 DAYS AGO
gmauthority.com

With customer deliveries of the 2022 Cadillac CT5-V Blackwing now underway, the American automotive media has also started to get their hands on the supercharged luxury sedan. Car and Driver is among the few outlets to have already tested the vehicle, with the publication comparing it against two of its direct rivals: the Audi RS7 and BMW M5.
CARS・6 DAYS AGO
CarBuzz.com

Ford And VW Have Built Their First New Car Together

Back in 2019, Ford and Volkswagen announced a joint partnership that would see the two automakers collaborate to develop commercial vehicles, self-driving technology, and an electric Ford based on VW's MEB platform. Ford and VW will also jointly develop the next-generation Volkswagen Amarok, which will share the same platform as the next-generation Ford Ranger.
BUSINESS・13 DAYS AGO
MarketWatch

The annual dead list for models that won't be coming back to the U.S. market for 2022 includes everything from an electric hatchback to a rugged SUV.
CARS・1 DAY AGO

General Motors' luxury brand Cadillac will soon get its own financing arm for customers as it continues to head toward a future of all-electric vehicles. Cadillac Financial, an arm of GM Financial, is expected to launch around the middle of next year, Cadillac spokesman Michael Albano said Friday and as was reported earlier this week by Automotive News.
ECONOMY・11 DAYS AGO
MotorTrend Magazine

The demand for the original 1969-1994 Chevrolet K5 Blazer two door is sky high, with perfect examples and high-end restomods fetching eye-watering prices. It's equally hard to find a clean, drivable example save for used-up ex-Army trucks. What is one to do if they really want one bad? Flat Out Autos might have the answer: Make your own using a 2015 and up Chevrolet Tahoe.
CARS・1 DAY AGO
Road & Track

The muscle car segment has long been defined by powerful V-8 engines here in the United States. The current crop of offerings from Detroit are all among the most powerful versions of the breed that we’ve ever seen, but it appears that will be changing slightly for the 2022 model year. As first reported by Ford Authority, all Mustang models powered by the 5.0-liter Coyote V-8 will see a reduction in horsepower and torque for 2022. More specifically, the much-loved powertrain will be down 10 hp and 10 lb-ft of torque in both the GT and Mach 1 offerings.
CARS・14 DAYS AGO
CAR AND DRIVER

From the November 2021 issue of Car and Driver. Stand around our cluttered, oil-soaked office garage and the conversation will eventually turn to tales of BMW's E90 M3. Sold from 2008 to 2012, the M car's legend continues to grow because subsequent M3s couldn't quite re-create the E90's magic blend of size, power, handling, and feel. In a turn of events unthinkable 20 years ago, Cadillac took up the mantle with the ATS-V and now the CT4-V Blackwing.
CARS・12 DAYS AGO
CarBuzz.com

Honda made a surprise announcement on its social media platforms earlier today, posting a pic showing the right rear of the all-new Civic Si sedan. This is our first proper glance at the actual car, and tomorrow we'll see it in all its glory. Even though this is only one...
CARS・8 DAYS AGO
MotorAuthority

A sunny day, a mountain road, a Milwaukee Brewers playoff game radio broadcast, and a sport sedan make a great way to spend an afternoon. This road leads from Denver through the foothills of the Rockies to Lyons, Colorado, and it’s the ideal setting for the redesigned 2022 Audi A3 and its sportier S3 companion.
CARS・8 DAYS AGO
CNET

2022 Audi A3 and S3 first drive review: A strong case for sticking with sedans

Trying to convince the buying public to shift back to sedans from crossovers is like trying to convince the tide not to come in. But there are still many consumers who want to keep their vehicles sleeker and lower to the ground, and for people who want to dip their toes into the luxury car experience, the 2022 Audi A3 and S3 offer some great reasons to stick with sedans.
CARS・8 DAYS AGO
Top Speed

Americans have a soft spot for the Lexus LX, thanks to its genuine off-road capability and bulletproof reliability while still offering a high degree of luxury. The all-new 2022 Lexus LX 600 carries on that tradition whilst also debuting a number of firsts for the Lexus brand. Same GA-F Platform...
BUYING CARS・3 DAYS AGO
Autoblog

DENVER — If there’s a car that best embodies a scrappy, tenacious, little puppy, it’d be the new 2022 Audi A3 and S3. And yes, the A3 is mostly just bark on account of its snarly (in a good way) looks, but the S3 brings a proper bite with its performance-minded handling and acceleration.
CARS・8 DAYS AGO
MotorTrend Magazine

The LT6 engine that will power the new 2023 C8 Corvette Z06 is as game changing as the LS1 was when it was introduced in 1997. Bold statement? Yep, but once you delve into the guts of the LT6, and look at its specifications, that opening claim may end up being somewhat of an understatement.
CARS・1 DAY AGO
gmauthority.com

The new, all-electric 2023 Cadillac Lyriq is the first rear-wheel-drive crossover from the luxury automaker in over a decade, revealing the performance nature of its flagship EV. For example, first-generation Cadillac SRX was built on the Sigma platform, making it rear-drive-based. Since then, however, all Cadillac crossovers have been front-drive...
CARS・4 DAYS AGO