Man City vs Southampton prediction: How will Premier League fixture play out today? 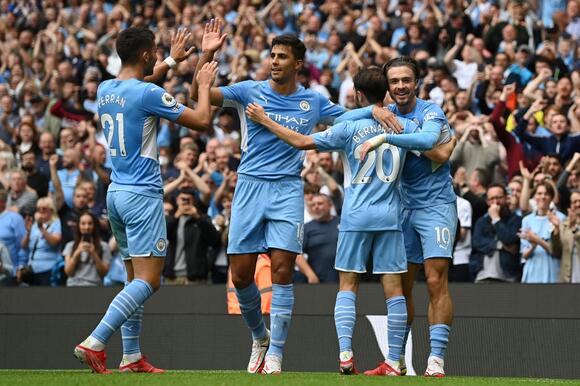 Manchester City will be looking for their fourth Premier League win on the spin as they host Southampton .

Pep Guardiola ’s side began their Champions League campaign with an entertaining 6-3 victory over RB Leipzig in midweek.

They meet Ralph Hasenhuttl ’s side, who travel north seeking a first league win of the season despite a number of encouraging performances.

Here is all you need to know about the Premier League fixture.

The game kicks off at 3pm on Saturday 18 September at the Etihad Stadium.

The game is not available to watch live in the UK but highlights will be shown on Match of the Day on BBC One on Saturday evening at 10.40pm.

Manchester City have no fresh injury concerns after Wednesday’s Champions League opener, but Pep Guardiola could look to rotate.

A number of his players started both against Leipzig and last weekend against Leicester, but Kevin De Bruyne misses out on a start here after playing 71 minutes of the meeting with Leipzig.

Southampton have more to consider – Stuart Armstrong is not yet back in training after his calf issue, while Theo Walcott also has a muscular problem and misses out.

Young midfielder Will Smallbone does not feature in the squad after an extended spell on the sidelines with a serious knee injury.

Manchester City should be too strong for Southampton, but don’t rule out Ralph Hasenhuttl finding ways to challenge them having seen his old club RB Leipzig score three against them in the Champions League. Manchester City 3-2 Southampton

The Premier League is back in action this weekend as the international break comes to an end. Current Records: Leeds United 1-3-3; Southampton 0-3-4 Leeds United's and Southampton's time off is coming to an end as we head into Matchweek 8. They are meeting up for the first time this season at 10 a.m. ET on Saturday at St. Mary's Stadium. Leeds United won both of their matches against Southampton last season (3-0 and 2-0) and is aiming for the same result this time around.
PREMIER LEAGUE・11 DAYS AGO
90min.com

The Premier League resumes this weekend as Man City host Burnley with Pep Guardiola's side looking to continue their strong start to the campaign. The Citizens sit just two points off Chelsea at the summit of the table, having recently emerged from back-to-back league visits to Stamford Bridge and Anfield with four points in the bag.
PREMIER LEAGUE・12 DAYS AGO
firstsportz.com

Despite having a great squad at his disposal, Pep Guardiola has failed to turn the heat in the initial weeks of the league. It has been the pattern in the last two seasons but Pep Guardiola has mastered the art to win the title. They face Burnley in their backyard and will look to claim their spot on top of the points table. Ahead of the Manchester City vs Burnley game, here is our preview and prediction.
PREMIER LEAGUE・13 DAYS AGO
CityXtra

Burnley have suffered 5-0 losses on their last four trips to the Etihad Stadium, with a bullish Blues side having scored at least five goals on four occasions already this season. Sean Dyche's team are winless in the Premier League so far this season, and having failed to beat Manchester...
PREMIER LEAGUE・11 DAYS AGO

Manchester City will aim to get back to winning ways in the Champions League when they face Belgian side Club Brugge in the first match of their double-header. Pep Guardiola’s side were beaten 2-0 by Paris Saint-Germain last time out in the competition and trail both PSG and Club Brugge by a point heading into the third round of fixtures. FOLLOW LIVE: Brugge vs Man City – latest UCL updatesTonight’s opponents have been the surprise package of Group A and have upset the odds by claiming four points from their opening two matches against PSG and RB Leipzig. City cruised...
UEFA・7 DAYS AGO
TechRadar

Currently sitting third from bottom, it's been a tough start to the season for Burnley, and things don't get any easier for the Clarets as they travel to the Etihad to face Pep Guardiola's superstars this afternoon. Read on to find out how to watch Man City vs Burnley online and get a Premier League live stream, no matter where you are in the world right now.
NFL・10 DAYS AGO
The Independent

Manchester City are set to be boosted by the return of goalkeeper Ederson and forward Gabriel Jesus as they travel to Club Brugge in the Champions League tonight. Both players were unavailable for Saturday’s win over Burnley following their involvement for Brazil in World Cup qualifying as they had flown directly to Belgium for the match.FOLLOW LIVE: Brugge vs Man City – latest UCL updatesCity will be wary of another Club Brugge upset after the Belgian champions defied the odds to take four points from their opening two matches against Paris Saint-Germain and RB Leipzig in Group A. Pep Guardiola’s...
PREMIER LEAGUE・7 DAYS AGO
Yardbarker

Among the seven Manchester City games that will now be televised are two fixtures to be shown on Amazon Prime: a Wednesday night visit to Villa Park on the first day of December, and Brentford away at the end of the month. Meanwhile, Sky Sports will be showing Pep Guardiola's...
PREMIER LEAGUE・7 DAYS AGO

Just two points separate Pep Guardiola and Graham Potter's sides in the Premier League table ahead of the weekend meeting, with the Blues looking to avoid back-to-back defeats to the Seagulls for the first time. A stunning second-half comeback helped the South Coast side to an unexpected 3-2 win against...
PREMIER LEAGUE・4 DAYS AGO
CBS Sports

Manchester City faces a tough task in Saturday's English Premier League clash when it visits a Brighton & Hove Albion squad that's on a five-game unbeaten run. Manchester City (5-2-1) is the reigning league champion and is off to another strong start, scoring a lot of goals and conceding few. City beat Burnley 2-1 in its last league outing and cruised to a 5-1 win against Club Brugge in the Champions League on Tuesday. Brighton (4-3-1) finished 16th last season but is sitting fourth in the EPL standings, with its only loss a 2-0 setback to Everton. Brighton has played to consecutive scoreless draws, with Arsenal and Norwich City.
PREMIER LEAGUE・4 DAYS AGO
SkySports

Team news, stats and prediction ahead of Brighton vs Manchester City in the Premier League on Saturday Night Football; kick-off 5.30pm. Brighton defender Adam Webster could be available for the visit of champions Manchester City in the Premier League. Webster has missed the Seagulls' past five games in all competitions...
PREMIER LEAGUE・4 DAYS AGO
CityXtra

The Cityzens blasted past Club Brugge in Belgium with a 5-1 victory in the midweek Champions League game courtesy of a Riyad Mahrez brace and goals from Joao Cancelo, Kyle Walker, Cole Palmer. Pep Guardiola’s men are inches away from securing a spot in the Round of 16 of Europe's...
PREMIER LEAGUE・3 DAYS AGO

A great break from Chelsea turns into a corner play in the near end of the first half. Hakim Ziyech steps up to take the corner and Southampton’s defence, who had been able to hold its own against the hosts up until this point, simply allows Kai Havertz to rise highest in the penalty box and find the opener for the Blues.
PREMIER LEAGUE・2 HOURS AGO
The Independent

Chelsea host Southampton in the Carabao Cup round of 16 on Tuesday evening. Thomas Tuchel’s side were in imperious form against Norwich City on the weekend as they thrashed Daniel Farke’s sorry Canaries 7-0 at Stamford Bridge to maintain their one-point lead at the top of the Premier League. Tuchel will be keen to add more silverware to last season’s Champions League but is likely to take the opportunity to rotate his squad, even if injuries to Romelu Lukaku and Timo Werner will somewhat restrict his options. Southampton, meanwhile, were held to a 2-2 draw by Burnley at the...
PREMIER LEAGUE・4 HOURS AGO
The Guardian

Arsenal 2-0 Leeds United: Carabao Cup fourth round – as it happened

Minute-by-minute report: Calum Chambers scored immediately on arrival as a second-half substitute, as Arsenal made it through to the last eight. Scott Murray was watching.
PREMIER LEAGUE・1 HOUR AGO
The Independent

Chelsea needed penalties to advance in the Carabao Cup for a second consecutive round as they edged past Southampton with a 4-3 shoot-out victory at Stamford Bridge following a 1-1 draw.Reece James again provided the decisive kick, just as he did against Aston Villa in the previous round, with Theo Walcott and Will Smallbone missing for the Saints.Kai Havertz headed Chelsea into the lead seconds before half-time, guiding a header into the bottom corner from a corner.But Southampton would force spot-kicks when Che Adams fired in on the rebound after Kyle Walker-Peters’ effort was saved by the legs of...
PREMIER LEAGUE・1 HOUR AGO
chatsports.com

Rio Ferdinand has blasted Manchester United's lack of 'unity' and pressing ability after a hugely disappointing 4-2 defeat against Leicester on Saturday. The Red Devils were outclassed, outfought and outplayed as Brendan Rodgers' side took a fully deserved three points at the King Power. And iconic former defender Ferdinand declared...
PREMIER LEAGUE・8 DAYS AGO
The Independent

Manchester United have crashed to an embarrassing 5-0 defeat to Liverpool to pile the pressure on manager Ole Gunnar Solskjaer.Mohamed Salah scored a hat-trick at a shellshocked Old Trafford, with some home fans having already left before a miserable afternoon was made worse by the dismissal of half-time substitute Paul Pogba for a foul on Naby Keita.Here, the PA news agency charts eight other heavy losses United have suffered in the Premier League.Newcastle 5 Manchester United 0, October 20, 1996Philippe Albert’s stunning lob over Peter Schmeichel capped a thumping win as Kevin Keegan’s men gained some revenge having lost the...
PREMIER LEAGUE・2 DAYS AGO
90min.com

The international break is finally over (don't worry, we all have more misery coming in a month) and that could allow Liverpool to go top of the Premier League table should they beat Watford in Saturday's early game. The Reds have, for the most part, been close to their electrifying...
PREMIER LEAGUE・12 DAYS AGO
The Independent

Newcastle United’s new era of expected riches and Saudi-fuelled optimism starts on Sunday afternoon as they host Tottenham Hotspur at St. James’ Park.The P.I.F. consortium finally purchased the club from previous owner Mike Ashley during the international break, leading to delirious scenes outside St. James’ Park and human rights groups including Amnesty International raising concerns about links to the Saudi Arabian government. Steve Bruce remains in the dugout, for now, and will take charge of his 1000th match as a manager, as his side faces a Spurs team which defeated Aston Villa last time out to end a run of...
PREMIER LEAGUE・9 DAYS AGO