By Rodolfo Vieira
Amomama
28 days ago

Sharon Osbourne, who left "The Talk" back in March following a series of controversial events involving other co-hosts, recently revealed she underwent Ketamine treatment.

According to the 68-year-old, what happened on the show left her with quite a few mental and emotional scars, so much that she struggled with the fallout.

In an interview with Daily Mail, the star said she went through a "difficult patch at the beginning" and that she was utterly humiliated that people thought she was a racist.

It is worth remembering that Osbourne was on "The Talk" since 2010, and that she was asked to leave after being accused of using racist and homophobic language while interacting with the other co-hosts.

After news of her departure flooded the internet, the star, as well as her husband, rock star Ozzy Osbourne, started getting death threats, forcing them to increase security around their home. 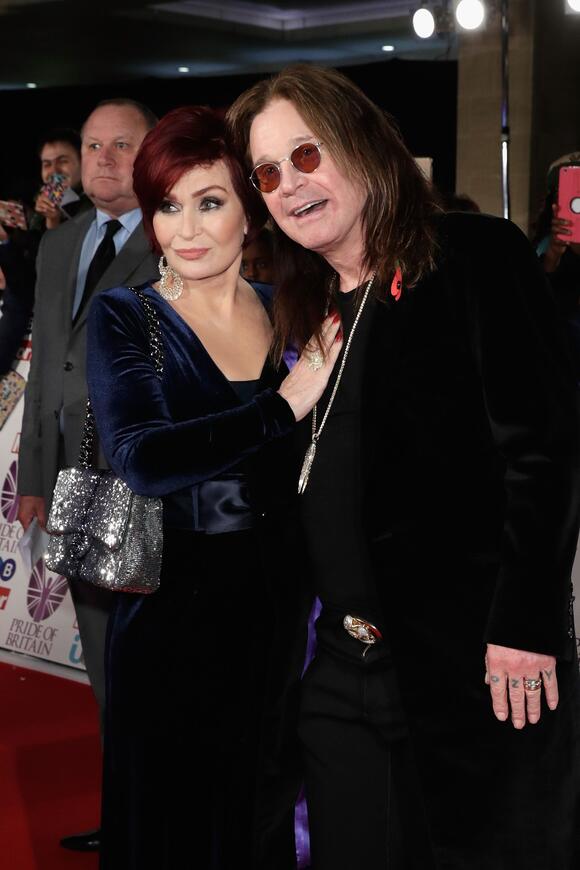 Aside from the embarrassment she felt, the whole situation and the increased danger led her to develop high levels of anxiety. Former co-host Sara Gilbert advised Osbourne to look into Ketamine for help.

Osbourne added that she won't be joining any TV show focused on talking and debate ever again.

According to the Alcohol and Drug Foundation, Ketamine is a dissociative drug most commonly used as an anesthetic and known for causing visual and auditory distortion.

This means that, when patients use the drug, they are put into a relaxed or detached state and may experience hallucinations, which is why some people illegally take it to get intoxicated.

It has been reported that Ketamine therapy has been found beneficial when it comes to treating patients experiencing severe depression and anxiety who haven't found success taking other anti-depression medications.

Osbourne admitted she underwent Ketamine therapy treatments and that they helped her move on with her life, leaving all those bad feelings in the past:

"I went through three months of therapy. I had ketamine treatment and I got it all out. All the tears and everything that I felt, you know. All of that, it's gone."

The 68-year-old, who was replaced on "The Talk" by Jerry O'Connell, added that she won't be joining any TV show focused on talking and debate ever again.

She believes it to be very unsafe, especially for her, considering all the drama a few months back, as she is afraid of making "half the nation" angry and doesn't want to put herself through the same grief.

Gosh people take so many things out of context. Sharon had a right to say what she did because she believed that what was said wasn't racist and I didn't think it was either. No reason for attacks on her or Ozzie.. I miss Sharon on the talk.

The Talk is the LOSER. They certainly sent the wrong host home. Sharon was the scape goat because she is white. Sharon said nothing wrong. She gave an opinion. Everyone is entitled to voice their opinion NOT RAM it down someone's throat, SHERYL!! The Talk needs to get off the air it is not fit to watch any more. I feel sure what it is today is NOT what Sarag Gilbert intended it to be.

Your missed, they sent the wrong one home, I don't watch it anymore, the whole thing was unfair

From a very young age, Shiloh Jolie-Pitt wanted to be called John. Therefore, when Brad Pitt's mother bought girly clothes for her, Angelina Jolie got understandably angry. Angelina Jolie and Brad Pitt were some of the most headline-grabbing Hollywood super-couples between the mid-2000s and late-2010s, especially after rumors that Pitt cheated on his then-wife Jennifer Aniston while filming "Mr. & Mrs. Smith" were everywhere.
CELEBRITIES・4 DAYS AGO
Amomama

Ada and Olivia’s mother kicked them out during their teenage years, and they had been living on the streets since. But their lives changed forever when their long-lost grandmother’s lawyer contacted them. “Get out of my house right now!” Ada remembered in her dreams. She never forgot the last words...
HOMELESS・4 DAYS AGO
Amomama

A woman in Rhode Island is facing a lawsuit after making false police reports about a little boy’s whereabouts that left the whole town in a frenzy. Daniela Peraza Lemus of Central Fall got herself nose deep in a legal issue following a bizarre incident involving a 2-year-old boy. According to the reports, the woman allegedly pretended to be a Good Samaritan who found a lost child and handed him over to the cops.
PAWTUCKET, RI・8 HOURS AGO
Amomama

Popular entertainer Diana Ross has proven she can be the best in everything she does, including motherhood. Let's meet the singer's well-raised children who are married and established in their careers. American singer Diana Ross is one of the most successful singers of the rock and roll era. She is...
RELATIONSHIPS・3 DAYS AGO

After Sheryl Underwood said that she most feared being branded an “angry Black woman” after her infamous on-air race row with Sharon Osbourne, Osbourne has claimed. . . that Underwood was made to do anger management classes. Osbourne also bizarrely claimed that the “Talk’s” network CBS ousted her in March...
CELEBRITIES・2 DAYS AGO
mediaite.com

Sharon Osbourne Names CBS Execs That Ousted Her From The Talk: ‘I’ve Told Them That They’ve Destroyed Me’

Sharon Osbourne singled out the CBS executives who ousted her from The Talk while sitting down with Megyn Kelly on Tuesday. “They are desperate to keep their jobs, they are desperate in these times we live in to be perceived as more than woke,” Osbourne said generally of TV executives while on The Megyn Kelly Show. “They wanna be seen as Mother Teresa and Jesus Christ and they — but they’re all hypocrites. They’re liars and they’re hypocrites and they’ll do whatever they have to do to keep their job.”
CELEBRITIES・3 DAYS AGO
blavity.com

Sharon Osbourne Has Taken Up Gossiping About Sheryl Underwood On TV

Former CBS talk show host Sharon Osbourne sat down for an interview with Megyn Kelly on Tuesday and blasted Sheryl Underwood, alleging her former colleague was sent to anger management after mistreating the producers. “Sheryl had three complaints about her from different producers about the way she treated them,” Osbourne...
CELEBRITIES・2 DAYS AGO
MetalSucks

The rapid fall of disgraced media company Ozy has been quite something to watch. Any ordinary observer would find the trainwreck-like story fascinating, with fraud, deception and swindling on the highest level. But it’s been especially scintillating for those of us directly involved with the media. What’s more, there’s a...
CELEBRITIES・10 DAYS AGO

Embattled Ozy Media continues to make headlines as founder-CEO Carlo Watson told the Today show the company is not in fact shutting down as it had previously announced in the wake of a fast unfolding financial scandal where he had been conspicuously absent. Watson said he stayed quiet all last...
BUSINESS・11 DAYS AGO
Popculture

Today Show journalist Natalie Morales announced plans to leave NBC News on Friday, which immediately led to speculation about her future. Sources told The Daily Mail Friday that Morales is heading to CBS' daytime talk show The Talk, which has undergone seismic changes in recent months. Sharon Osbourne was fired from the show in March, then Carrie Ann Inaba and Elaine Welteroth both announced they were leaving before Season 12 started in September. Osbourne and Inaba were replaced by Jerry O'Connell and Akbar Gbajabiamila, respectively.
TV & VIDEOS・14 DAYS AGO
Radar Online.com

Natalie Morales has revealed she's already got a new gig after departing NBC last week. The 49-year-old television host will be joining The Talk as host. The announcement came after an insider from CBS revealed they were trying to bring Natalie in as an effort to "save the show" following Sharon Osbourne's "disastrous exit."
CELEBRITIES・11 DAYS AGO
Stereogum

This past week, the internet media has been consumed with the strange story of Ozy, a digital media company that has been using some, ahem, unconventional tactics to attract money. Earlier this week, the New York Times published an exposé that included an absolutely wild story about Ozy COO Samir Rao jumping on a conference call with a team of potential Goldman Sachs investors, electronically altering his voice and claiming that he was actually a YouTube exec. Since then, Ozy advertisers have suspended campaigns, execs have stepped down, and the whole institution looks like one pathetically flimsy house of cards. And now Ozzy Osbourne is involved, too!
CELEBRITIES・14 DAYS AGO

Ozzy Osbourne, through all the good and the rock ‘n roll bad, loves his wife, Sharon Osbourne. And he wished her another very happy trip around the sun. Sharon Osbourne celebrated her 69th, Saturday. Her husband posted a photo of the two of them on Instagram, captioning it:. “Happy Birthday...
CELEBRITIES・6 DAYS AGO
Outsider.com

Sharon Osbourne and “The Talk” had a huge falling out back in March. Despite that being several months ago, Osbourne is still opening up about the entire situation. For a refresher, CBS announced the departure of Osbourne from the popular talk show back on March 26. The decision to cut Osbourne off “The Talk” was due to a controversial conversation that occurred on the show. She defended her friend Piers Morgan over comments he made regarding the royal family on an episode that aired on March 10.
CELEBRITIES・2 DAYS AGO
Insider

Sharon Osbourne quit the show earlier this year following a heated debate about racism after she defended Piers Morgan.
TV & VIDEOS・2 DAYS AGO
Us Weekly

Cancer is no joke, and we’re often reminded of its impact when a celebrity undergoes their own battle with the disease. Fortunately, many of them have been able to beat it. Sharon Osbourne was diagnosed with colon cancer in 2002 and underwent chemotherapy to mediate the issue. Though she successfully recovered, the Osbournes alum chose to have a double mastectomy in 2012 to lower her chance of getting cancer again.
CANCER・6 DAYS AGO
nickiswift.com

Sharon Osbourne Lashes Out At The Talk

Sharon Osbourne is, again, speaking out about her exit from CBS' "The Talk." Osbourne exited the daytime talk show in March after getting into a heated argument over racial issues with co-host Sheryl Underwood. During the March 10 episode, Osbourne spoke about being labeled a racist after she had defended her friend Piers Morgan over disparaging comments he made about Prince Harry and Meghan Markle's interview with Oprah Winfrey, per Vulture. Underwood attempted to have a conversation with Osbourne about racist behaviors when Osbourne lashed out at her on air.
CELEBRITIES・2 DAYS AGO
Ok Magazine

Sharon Osbourne is going after her former bosses on The Talk with full force. The embattled TV personality called out the head of CBS Daytime, Amy Reisenbach, as well as show runners Heather Gray and Kristin Matthews for not backing her amid the racism allegations that led to her exit from the beloved talk show.
CELEBRITIES・2 DAYS AGO
talesbuzz.com

Sharon Osbourne continues to stand by longtime friend Piers Morgan. On Wednesday, more than six months after she left CBS’s The Talk following her on-air defense of him, she shared a photo of them meeting at a restaurant. “The naughty corner…lovely time out with my dear friend @piersmorgan,” she captioned it, adding a winking emoji.
CELEBRITIES・8 DAYS AGO