Ugo Monye: Who is the Strictly Come Dancing 2021 contestant and what is he famous for? 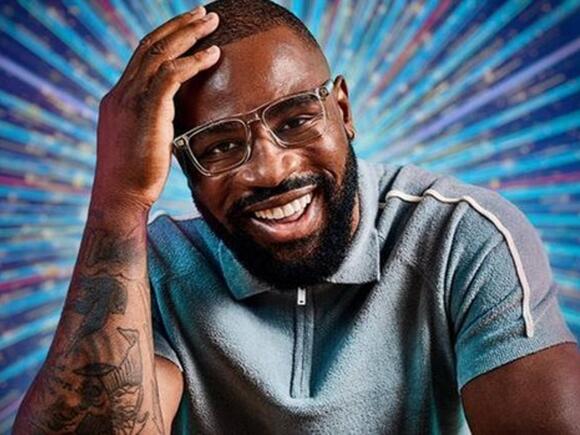 Rugby player and TV presenter Ugo Monye is among the celebrity contestants on this year’s series of Strictly Come Dancing .

Monye recently made his debut as part of the revamped A Question of Sport as a team captain opposite former Olympic gold medal winning hockey player, Sam Quek. Paddy McGuinness joined them as the new host, replacing Sue Barker.

Before his TV career, Monye played rugby union for Harlequins and went on to be capped by England 14 times.

Born in Islington, London, Monye was a standout athlete from an early age. He competed in the 100m at the English Schools’ Championships, placing fifth. He ran alongside future Olympian, Mark Lewis-Francis.

As an 18-year-old, Monye was faced with the decision of pursuing either athletics or rugby and chose the later after his sports master put him in touch with the coach of Harlequins under 19’s.

Within a year, Monye was offered a professional contract. A versatile player, Monye is capable of playing on the wing, in the centre or at full back.

After excelling at club level, scoring 47 tries in 105 games for Harlequins, Monye was selected for England in 2008, starting all of their autumn internationals against Australia, South Africa and New Zealand.

In recognition of his good form, Monye was selected for the British and Irish Lions tour of South Africa and finished as the team’s leading try scorer with five. 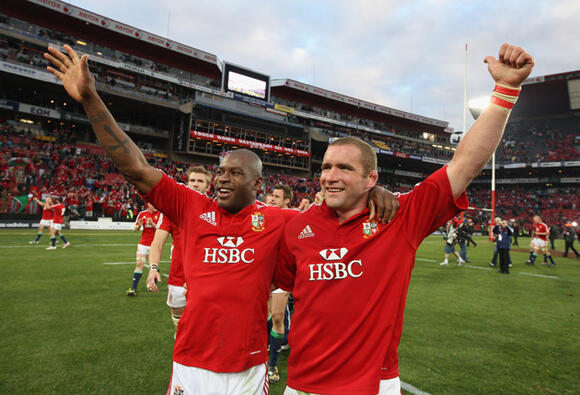 Monye underwent a serious toe surgery in 2010 and never fully regained his previous form, only scoring two tries for England in 14 appearances.

Since retirement, he has become a familiar face on the TV as a pundit for BT Sport.

Strictly Come Dancing airs on Saturday nights on BBC One.

Strictly's Ugo Monye is forced to pull out of Saturday's live show due to 'back problems'... just a day after Robert Webb quit because of his ill health

Strictly's Ugo Monye has been forced to pull out of Saturday's upcoming live show with an injury. The rugby union player, 38, - who is partnered with Oti Mabuse - took to Twitter on Thursday to reveal to fans that he was suffering from 'back problems' but would be back the week after.
CELEBRITIES・6 DAYS AGO
goodhousekeeping.com

Strictly Come Dancing star Ugo Monye will miss this weekend's show due to injury. The rugby star, who is partnered with Oti Mabuse, revealed on Twitter that issues arising from his history of back problems needed to be treated. He added that the period of recovery should "ensure" that he will be fit again for the following weekend.
CELEBRITIES・5 DAYS AGO
Hello Magazine

This Strictly Come Dancing star was in Glee – did you spot them?

The stars of Strictly Come Dancing have come to be hugely popular from their time on the show but it seems that many of the dancers had quite the career before joining the BBC competition. One professional in particular appeared on another popular TV show, Glee, before they entered the Strictly ballroom, but did you notice them?
THEATER & DANCE・8 DAYS AGO

Strictly Come Dancing 2021: Katie McGlynn is the second contestant to be eliminated from series

Sunday night’s (10 October) episode of Strictly Come Dancing saw the second elimination of its 19th season.Following on from the previous night’s Movie Week episode, the weekly results show featured a dance-off between Katie McGlynn and Judi Love.McGlynn, an actor, performed to the song “Cruella DeVil” with her partner Gorka Márquez, while stand-up comedian Love danced with partner Graziano Di Prima.While Anton Du Beke voted to save McGlynn, the other three judges – Craig Revel Horwood, Shirley Ballas and Motsi Mabuse – all opted to save Love.Speaking after her elimination, McGlynn said: “I’ve absolutely loved my time and I...
TV SHOWS・10 DAYS AGO
femalefirst.co.uk

Greg Wise and Karen Hauer have been voted off 'Strictly Come Dancing'. Greg Wise has been eliminated from 'Strictly Come Dancing'. The 55-year-old actor and his professional partner Karen Hauer have left the BBC show, after they found themselves in the dreaded dance-off alongside Judi Love and Graziano Di Prima.
THEATER & DANCE・3 DAYS AGO
Hello Magazine

Janette Manrara has revealed her new friendship with Strictly Come Dancing contestant Sara Davies, and we love that the pair are such close pals! Sara originally shared a post of the pair smiling at dinner, writing: "We spent the whole night gossiping and the lads never got a word in edgeways!"
THEATER & DANCE・7 DAYS AGO
goodhousekeeping.com

Cameron Norrie's breakthrough season reached a high point in the California desert on Sunday with a 3-6, 6-4, 6-1 win over Nikoloz Basilashvili to become the first Briton to win the ATP Indian Wells title. Henman made the final twice, in 2002 and 2004 when he lost in straight sets to Roger Federer 6-3, 6-3.
SPORTS・2 DAYS AGO
The Independent

Strictly Come Dancing has returned to our screens this autumn, with a whole new group of celebrities tasked with learning how to ballroom dance.With the 2020 series comprising a reduced run of episodes due to the pandemic, the 2021 series marks a return to normal for the hit BBC reality show.You can click here for a full list of this season’s contestants, which includes Strictly’s first all-male partnership.Each week, BBC One will air two episodes, in the vein of previous seasons. Saturday will feature a live show, in which all the contestants perform a dance tailored to that week’s...
TV SHOWS・10 DAYS AGO
Hello Magazine

We've been loving the return of Strictly Come Dancing and seeing the brand new celebrity contestants take the floor with some show-stopping routines. We've also enjoyed seeing our favourite judges – including new recruit Anton Du Beke – reprise their role on the panel to give their verdicts each week.
THEATER & DANCE・14 DAYS AGO
Telegraph

“It’s never too early for a 10 from Shirley.” That’s what Strictly Come Dancing's head judge Shirley Ballas is partial to announcing, shortly before holding up her maximum score paddle. Sometimes, though, it is too early. Sorry, Shirl. We know it rhymes and everything but you might want to tweak your catchphrase.
THEATER & DANCE・9 DAYS AGO

Fans of Strictly Come Dancing are calling for the cancellation of the Sunday spin-off show after this week’s elimination result leaked, leaving fans reeling. Agh. As the results of the BBC show are filmed straight after Saturday night's live show, it's easy for Twitter stirrers to ruin Sunday's surprise. So much so, it has become customary to find out via social media which contestant has left the competition way before the ‘live’ show is due to air. Understandably, some fans aren't happy.
TV & VIDEOS・9 DAYS AGO
NME

Webb, 49, said he was “extremely sorry” that he had to leave the show. “I’m proud of the three dances that [dance partner] Dianne Buswell and I managed to perform and deeply regret having to let her down like this,” he said. “I couldn’t have wished for a more talented...
CELEBRITIES・7 DAYS AGO
The Independent

What the papers sayA strong start to the season reportedly has the eyes of bigger clubs on Southampton’s Mohamed Elyounoussi. The Sun cites the Daily Record as saying Arsenal are monitoring the winger, who has scored four goals and provided two assists in seven appearances for Saints this term. But the papers add Leicester are also interested in the 27-year-old Norway international.Mohamed Salah wants some £400,000 per week to re-sign with Liverpool according to the Telegraph. The Egypt forward, 29, has scored an impressive 135 goals in 214 games for the Reds to be currently rated one of the...
PREMIER LEAGUE・1 DAY AGO
femalefirst.co.uk

Kimberley Walsh wants to be a judge on Strictly Come Dancing

Girls Aloud star Kimberley Walsh has offered to be a judge on the 'Strictly Come Dancing' panel. Kimberley Walsh wants to return to 'Strictly Come Dancing' as a judge. The Girls Aloud star would love to follow in the footsteps of fellow singer, Alesha Dixon, who had a stint on the judging panel of the BBC One celebrity dance contest between 2009 and 2011, after lifting the glitterball trophy in 2007.
NFL・2 DAYS AGO
The Independent

England were coming to terms with a day of grim injury updates after Luke Cowan-Dickie and Anthony Watson were ruled out of the entire Autumn Nations Series.Cowan-Dickie has fallen to the ankle problem sustained in Exeter’s victory at Wasps on Saturday and has been replaced in Eddie Jones’ 34-man squad for the Tests against Tonga, Australia and South Africa by Jamie George.And, in another seismic blow to England, the PA news agency understands that Watson will also miss the autumn, and potentially the Six Nations as well if the knee damage sustained late in Bath’s home rout by Saracens is confirmed as a ruptured ACL.The only ray of light in an otherwise bleak afternoon was that Maro Itoje’s shoulder injury, which also incurred at the Recreation Ground on Sunday, is not serious.As such, Itoje should be available to face Tonga at Twickenham on 6 November.
RUGBY・1 DAY AGO
The Independent

Man City manager Pep Guardiola has said that 19-year-old Cole Palmer has a “special quality” after the teenager came off the bench to score against Club Bruges in a 5-1 win for his side in the Champions League. However, Guardiola stressed the need for patience in seeing how Palmer develops...
PREMIER LEAGUE・14 HOURS AGO