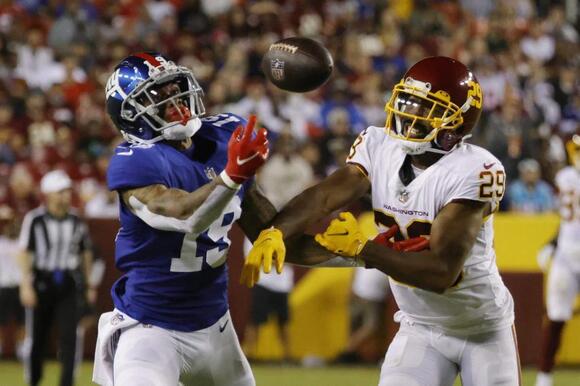 New York Giants coach Joe Judge told reporters Friday that there was nothing to see regarding Kenny Golladay’s apparent shouting at Daniel Jones on Thursday night.

During the Giants’ 30-29 loss to the Washington Football Team, Golladay was seen yelling in the direction of his quarterback on the sideline. Judge didn’t have many details to offer after saying the team’s VP of communications filled him in on the apparent spat.

“Look, I’ll talk to all of our players,” Judge said. “In terms of what you asked about with Kenny, I’ll go with the same thing I said last night — I talked to the players, talked to the coaches that were involved and everyone has kind of dismissed everything in terms of there was no conflict. It was more just emotions on the sideline, talking through situations, things going. 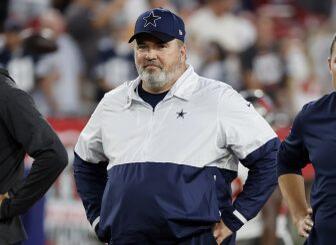 “Our guys have good relationships, they work together. I don’t really see any issue with that right there, so talked with the players involved and they were good.”

Other than Sterling Shepard (nine catches, 94 yards), most New York receivers played nothing more than a supporting role in the offensive game plan Thursday. Golladay, who signed for four years and $72 million during free agency, finished with three catches on eight targets for 38 yards. 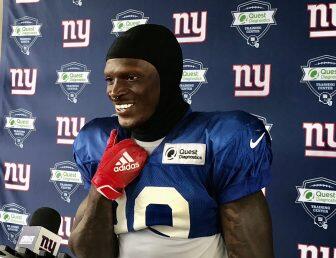 Golladay wasn’t the only receiver reportedly frustrated with the offense. Rookie wideout Kadarius Toney, a first-round draft pick in April, posted a comment on his Instagram story after the game that said, “I don’t be mad (expletive) just be lame to me fr.”

The Newark Star-Ledger reported that Toney, who was not targeted Thursday, was aggravated over his role thus far, describing Toney’s thinking as, “No use in having a sports car and not driving it.” Toney has accumulated one reception for a loss of two yards thus far in his career.

Toney later tweeted, “Y’all try to turn anything into something, SMH … we good over here.”

NFL Decides On Punishment For Cowboys vs. Giants Fight

Last Sunday, a fight broke out between New York Giants rookie wideout Kadarius Toney and Dallas Cowboys defensive back Damontae Kazee. Toney was ultimately ejected for throwing a punch at Kazee. It was unfortunate that Toney lost his composure and threw a punch at Kazee because it overshadowed his performance...
NFL・8 HOURS AGO
Lubbock Avalanche-Journal

Giants head coach Joe Judge in the third quarter against the New Orleans Saints at Caesars Superdome on October 03, 2021. Credit: Getty Images/Jonathan Bachman. The Giants finally got the win they wanted. The win they needed. It took more than 65 minutes of play, a comeback from an 11-point fourth-quarter deficit, and a little luck on a coin toss, but Sunday’s 27-21 victory over the Saints was the first time this season that felt as if they had anything at all to celebrate.
NFL・12 DAYS AGO
New York Post

Joe Judge hasn’t forgotten everything he learned under Bill Belichick and Nick Saban. But this isn’t the team he promised New York. Show us that team, and show it to us now, before it’s too late. Going 6-10 as a rookie head coach during a pandemic with a team that...
NFL・14 DAYS AGO

New York Giants head coach Joe Judge has had to deal with a slew of hardships in this young NFL season, mainly with injuries to some key figures in his locker room. In the Giants’ Week 4 win down in New Orleans, Judge was without two of his top wide receivers in Sterling Shepard and Darius Slayton, both of whom were ruled out of the game with hamstring strains.
NFL・11 DAYS AGO
talesbuzz.com

You expected — OK, wanted — at least a hint of euphoria afterward. To say Giants coach Joe Judge isn’t an advocate of hyperbole is as much a gross understatement as Bill Belichick relishing a deep delve into his relationship with Tom Brady. But even those who know the low-key...
NFL・12 DAYS AGO
Yardbarker

Down 11 points with just about 12 minutes to spare in the fourth quarter, the New York Giants flipped the switch and scored 17 unanswered points to take a huge road victory against the New Orleans Saints at the Caesars Superdome this season. Though it was difficult not to notice...
NFL・12 DAYS AGO
Daily Item

NEW ORLEANS (AP) — Saquon Barkley ran for a 6-yard touchdown in overtime after Daniel Jones passed for a career-high 402 yards, and the New York Giants rallied for their first win of the season, 27-21 over the New Orleans Saints on Sunday. The Saints, playing in New Orleans for...
NFL・13 DAYS AGO

This past Sunday at the Caesar’s Superdome, the New Orleans Saints were upset in overtime by the New York Giants by a score of 27-21, sending the usually fervent Big Easy fandom home dispirited after their first home game since Hurricane Ida and first full capacity game since their wild-card matchup against the Minnesota Vikings back in 2019.
NFL・10 DAYS AGO
chatsports.com

New York Giants head coach Joe Judge isn’t looking to add more narratives to an already important division matchup on Sunday. Despite having a chance to play it up as motivation for the team, Judge had a very Belichick-like response when asked about Troy Aikman’s radio comments about the Giants.
NFL・8 DAYS AGO
Newsday

A day after Troy Aikman said the Giants "aren’t in Dallas’ class," Joe Judge acknowledged that this Sunday’s matchup against the Cowboys will be a challenging one, but added that his team has no need for external motivation — even if it comes from a Hall of Fame quarterback. "I...
NFL・8 DAYS AGO

Joe Judge prides himself on running a disciplined football team. So when Kadarius Toney was ejected in the fourth quarter of his New York Giants’ 44-20 loss to the Dallas Cowboys on Sunday, Judge was furious. Toney was ejected for throwing a punch at Dallas defender Damontae Kazee, who tackled...
NFL・6 DAYS AGO
Yardbarker

Some final thoughts and takeaways from the Giants' 44-20 Week 5 loss to the Dallas Cowboys. 1. NO DEFENSE. Last year the Giants defense was as close to a tightly run ship as there was, a bright spot amid a team searching for its identity. But this year? This Giants...
NFL・5 DAYS AGO
chatsports.com

Cowboys vs. Giants: “This is a game that could be a “signature” win for Joe Judge and the Giants”

The Dallas Cowboys host an NFC East rival when the New York Giants come to town on Sunday. As we usually do, we caught up with Big Blue View, SB Nation’s Giants blog, to get the lowdown on the G-men. Blogging The Boys: Daniel Jones seems to be a polarizing...
NFL・8 DAYS AGO
247Sports

New York Giants rookie wide receiver Kadarius Toney shined during Sunday’s 44-20 loss at the Dallas Cowboys, but was ejected late in the fourth quarter for throwing a punch. The 2021 first-round pick and former Florida Gators star recorded 10 receptions for 189 yards before he left the game. Giants head coach Joe Judge opened up on what his reaction was to Toney’s actions and if he would discipline him further.
NFL・5 DAYS AGO

Fantasy Football Start Or Sit Week 6: Will Darrel Williams Get Enough Touches For The Chiefs?

(CBS Boston) — Having one of the Kansas City Chiefs’ offensive skill players in your fantasy lineup can certainly help your scoring output. But that hasn’t necessarily been a guarantee this season. While Patrick Mahomes has generally been consistent (turnover issues not withstanding), other players have had off-weeks. It’s been feast or famine with receiver Tyreek Hill. Travis Kelce picked up just two points against the Philadelphia Eagles. And running back Clyde Edwards-Helaire sometimes seemed to disappear from the offense. Edwards-Helaire is now on injured reserve with a knee injury. Darrel Williams is set to take over the starting spot. Is...
NFL・2 DAYS AGO
Yardbarker

On Tuesday, the New York Giants worked out offensive linemen Forrest Lamp, Elijah Nkansah, and Devery Hamilton. Lamp, a guard, is probably the most well-known of the group. The former Kentucky product was a second-round draft pick by the Chargers in 2017. However, his career never really got out of the gate due to injuries which included a torn ACL his rookie year and then a broken fibula in 2019.
NFL・4 DAYS AGO
Yardbarker

Breaking Down Some of the New York Giants Pass Rush Issues

Last season, the Giants defense was called upon to support a lifeless offense. As the team struggled to a 6-10 record, the defense found itself on the field for too many snaps due to the offense’s inability to stay on the field. This season it seems to be the exact...
NFL・1 DAY AGO