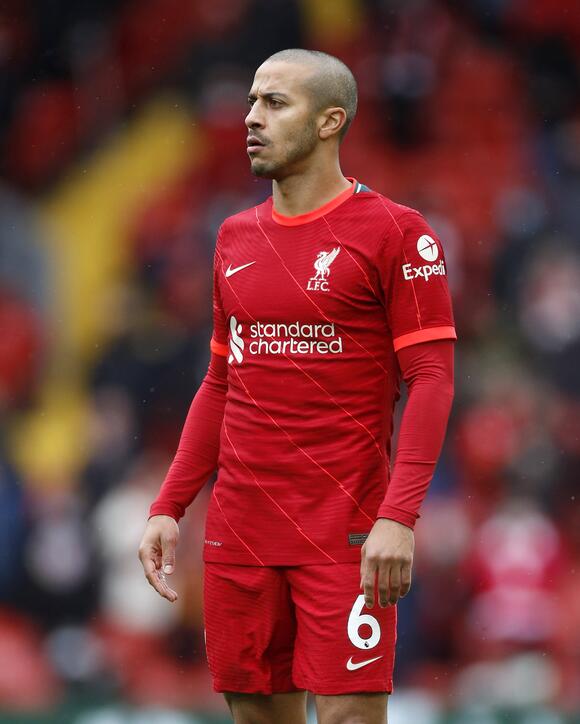 Liverpool manager Jurgen Klopp likened Thiago Alcantara’s touch to that of a world-class golfer after promising the midfielder still has plenty to contribute.

It is 12 months since the Spain international’s arrival from Bayern Munich was hailed as the ‘game-changer’ the then Premier League champions needed to kick on.

Unfortunately things did not transpire that way for the 30-year-old as, two games in, he sustained a knee injury in the same October Merseyside derby which also ended Virgil Van Dijk’s season. Thiago played just once in three months as his recovery took longer than expected and he did not properly start to show his best form until the latter stages of the campaign.

His adaptation to English football was not helped by only being able to play in a first-choice midfield alongside Jordan Henderson and Fabinho once – the game at Everton.

Last weekend’s win at Leeds offered a glimpse of his best form and Klopp hopes he will get into his stride quicker this season in a more stable side.

“The start was not perfect because he came here and got Covid and got injured early,” said the manager.

“He showed what kind of a player he can and will be for us, so there is much more to come, of course.

“It is now a year, but if you want it is actually only half a year because of all the things that happened.

He can chip balls into each area like a golfer. A good golfer. A world-class golfer

“In a closed area with his passing he is really good, and he can chip balls into each area like a golfer. A good golfer. A world-class golfer.

“He does that without even thinking. I love the way he plays.”

With all his – and the team’s – struggles last season Thiago was criticised for slowing down Liverpool’s play.

Klopp sees it differently, however, in the knowledge the midfielder brings something others in his position cannot and that gives his side an extra dimension.

“We try to develop every year,” he added.

“There are some natural skills which the boys have. In Thiago’s case, that is for sure. If you were writing under a headline, all the technical stuff is easy for him.

“I don’t ask him for constant runs beyond the last line. He is a playmaker, obviously, who can sometimes be a little deeper, but you have to play between the lines.”

"Manchester United remain a team of individuals rather than a team. Cristiano Ronaldo has added to that rather than fixed it," said Jamie Carragher.
PREMIER LEAGUE・2 DAYS AGO
LFCTransferRoom

Liverpool have been linked once again with Real Madrid forward Marco Asensio. After being linked with the Spanish forward in the summer, reports have re-surfaced that Jurgen Klopp may still hold an interest in the player. Spanish publication ABC reported this week that Liverpool are one of a number of...
PREMIER LEAGUE・11 DAYS AGO
Yardbarker

Jurgen Klopp Talks About what He Will do After Leaving Liverpool

In them three years who knows what will happen. Hopefully many more trophies and awards. Liverpool fans will also be hopeful that Klopp will extend his stay after 2024 and continue to manage the mighty Reds for years to come. Klopp on what He Will do After Leaving Football. Jurgen...
PREMIER LEAGUE・14 DAYS AGO
Yardbarker

Liverpool are using neuroscience experts to help improve Liverpool's set pieces. Dr Niklas Hausler and Patrick Hantschke of neuro11 joined Liverpool to teach the Liverpool's players to be mentally sharp when coming to set pieces. Aiming to be one step in front of the opposition is always something Klopp will...
PREMIER LEAGUE・10 DAYS AGO

Jurgen Klopp Would Have Loved to Have Coached Steven Gerrard

In an interview with This Is Anfield, Jurgen Klopp was asked to name a great player from history who he would like to coach: “That’s easy. It’s Stevie.” he said. “To be honest, I knew Liverpool and I saw him playing, of course, but a little bit advanced age group wise but they were all really good. But Stevie, what a player he still was then! I think he was already retired but maybe a youth coach here. Incredible. Stevie and me together in the roles, he as the man on the pitch and me as a coach that would have been nice. So it’s Stevie”, he added.
PREMIER LEAGUE・13 DAYS AGO
punditarena.com

Jurgen Klopp names the one footballer he wished he managed

When you’ve the endorsement of Jurgen Klopp, Thomas Tuchel or Julian Nagelsmann for your work, you must be doing something right. All three tactical masterminds have worked under or learnt from Ralf Rangnick, a man who Klopp even noted was “one of the best, if not the best German coach,” per ESPN.
PREMIER LEAGUE・10 DAYS AGO
ESPN

The summer transfer window was unlike any other; see all the major deals and check out how we graded the biggest signings. And just because the window is shut until January, that doesn't mean the rumours won't keep coming. Here is the latest gossip and speculation. TOP STORY: Man City,...
PREMIER LEAGUE・1 DAY AGO

More reports have came out claiming that Liverpool are interested in Barcelona's Ousmane Dembele. Liverpool are in desperate need of some attacking quality either in January or next summer. If Liverpool want to get big players in like Federico Chiesa or Dusan Vlahovic, they will most likely be done next...
PREMIER LEAGUE・10 DAYS AGO
Daily Mail

Alex Oxlade-Chamberlain 'is weighing up shock return to Arsenal four years after leaving... with Liverpool midfielder frustrated at lack of chances under Jurgen Klopp' since returning from injury

Alex Oxlade-Chamberlain is reportedly considering a surprise return to Arsenal after becoming frustrated at his lack of opportunities at Liverpool. The 28-year-old midfielder scored 20 goals in 198 appearances during a six-year spell with the Gunners, but left four years ago for Anfield in a £35million move. But The Sun...
UEFA・10 DAYS AGO
LFCTransferRoom

Injury Update: Concerns for Liverpool And Jurgen Klopp Ahead Of Watford Clash

Diogo Jota faces a race against time to be fit for Liverpool's Premier League match against Watford on Saturday after picking up a muscle injury on international duty. Jurgen Klopp will be hoping that the forward recovers in time and that the minor groin problem Curtis Jones picked up whilst training for England under 21s is also fully healed.
PREMIER LEAGUE・10 DAYS AGO
SPORTbible

Liverpool are interested in signing Barcelona's Ousmane Dembele despite the Frenchman trashing Jurgen Klopp's house back in the day. The winger signed for the club in a £97 million deal in 2017, effectively bringing him in as Neymar's replacement after he left for Paris Saint-Germain in a world-record £198 million switch.
PREMIER LEAGUE・8 DAYS AGO

Liverpool manager Jurgen Klopp has questioned the Premier League’s silence on human rights issues following the Saudi Arabian-backed takeover of Newcastle. The Premier League approved the takeover after receiving “legally binding assurances” that the Saudi state would not control the club. Instead the Public Investment Fund (PIF), which will provide...
PREMIER LEAGUE・6 DAYS AGO
chatsports.com

Jürgen Klopp revealed on Friday that Jones is sidelined with a 'slight injury' he sustained during the international break while representing England U21s. Thiago Alcantara continues to be ruled out with his calf issue, though Alexander-Arnold and Jota are in contention for the Premier League encounter. Speaking at his pre-match...
PREMIER LEAGUE・6 DAYS AGO
90min.com

Liverpool star Thiago Alcantara remains a doubt for the club’s Premier League clash with Watford on Saturday, although Trent Alexander-Arnold and Diogo Jota are likely to feature. Thiago was outstanding in Liverpool’s Premier League win over Leeds last month but has missed the last four games in all competitions because...
PREMIER LEAGUE・8 DAYS AGO
Telegraph

Jürgen Klopp, the Liverpool manager, has criticised Newcastle United’s Saudi Arabia takeover and compared it to last season’s attempt to create a European Super League. On a day when Newcastle finally confirmed that Steve Bruce will lead Newcastle into their Premier League match against Tottenham Hotspur on Sunday, and both Brendan Rodgers and Rafael Benítez confirmed they will not look to replace him if he is eventually sacked, managers across the top flight expressed their concern over last weekend’s takeover drama.
PREMIER LEAGUE・6 DAYS AGO
fourfourtwo.com

Liverpool manager Jurgen Klopp wants more direct communication with football’s decision-makers as he does not believe the current situation is benefiting the game. The German said he had spoken to Premier League chief executive Richard Masters only “one or twice” during his six years in England and did not think the league’s 14-vote threshold required to effect changes had produced much good for football in general.
UEFA・6 DAYS AGO
fourfourtwo.com

Jurgen Klopp hailed Mohamed Salah’s “outstanding performance” in Liverpool’s 5-0 demolition of Watford and reiterated his belief that the Egyptian is the best player in the world. The forward laid on the early opener for Sadio Mane with an exquisite pass, the Senegal international’s 100th Premier League goal, and produced...
PREMIER LEAGUE・5 DAYS AGO
fourfourtwo.com

Jurgen Klopp has warned the Premier League there is more to come from Mohamed Salah. Salah scored for the eighth consecutive game in all competitions and also produced an exquisite pass for Sadio Mane’s opener in Liverpool’s 5-0 demolition of Watford on Saturday. Roberto Firmino netted a hat-trick as the...
PREMIER LEAGUE・4 DAYS AGO
SB Nation

News emerged a couple of months ago that Liverpool’s Sporting Director Michael Edwards - a fan favourite - could depart at the end of this season when his contract expires. Jurgen Klopp was asked to comment on it this week, but he did not seem concerned by the rumour, the Liverpool Echo reports. This was his response:
PREMIER LEAGUE・4 DAYS AGO