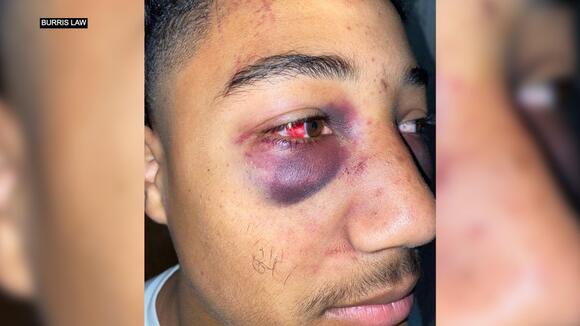 STOCKTON (CBS13) — Two former Stockton police officers were on the other side of the law, indicted Friday on assault charges for the alleged beating of a teen last December.

Both officers will report to jail Saturday morning.

San Joaquin County District Attorney Tori Verber Salazar announced the case is being referred to the Department of Justice for civil rights violations, but the family of Stockton teen Devin Carter still claimed a small victory Friday over the local police department.

“Not many people who go through police brutality or get shot by police survive,” Carter said.

Nine months ago, Carter begged for his life. Police body camera footage released by the Carter family’s attorney shows the brutal beatdown of the then 17-year-old by four Stockton police officers.

“They will be held accountable,” family attorney John Burris said.

Burris commended Salazar for indicting two of the four officers—Omar Villadupua and Michael Stiles—on charges of assault by a public officer and assault with force.

“It does not matter who you are, what your profession, we must all be held accountable for our actions,” Salazar said.

The Stockton Police Officers Association released a statement Friday afternoon supporting the indicted officers, claiming they feared for their lives after the teenager led them on a car chase, writing, in part:

“Mr. Carter drove in excess of 100 miles per hour with no headlights on, often in opposing lanes of traffic.”

Burris says carter took off because he was in fear for his life.

“There was fear on the part of Devin when police were pursuing him,” he said. “T hat’s the kind of fear an African American man will have on a dark road when there’s no one else who can protect you and save you.”

Burris represented Rodney King 25 years ago and says he’s confident this time around his client will see justice.

Burris had strong words Friday, telling reporters he has not been a part of a police brutality case this severe since he represented King during his civil trial.

The indicted officers are expected to appear in court on November 11.

Just dismayed by the number of people who think it's perfectly OK for the police to take the law into their own hands. When the citizens wind up paying a huge settlement or judgement, I guess they'll just complain about that too?!

How can you claim that you fear for your life when you and 3 others are literally beating someone to death? At what point are you no longer fearing for your life..when the victim is dead?

only reason why the officers are being charged is because his black! he is a typical young punk.

A correctional officer from Jersey City was arrested Wednesday and charged with raping an inmate at the Edna Mahan Correctional Facility for Women.Tyrell Harris-McLaughlin, 28, was charged with sexual assault and official misconduct in connection with the Sept. 16 incident at the troubled Union Tow…
PUBLIC SAFETY・14 DAYS AGO
madison

A Verona teen was sentenced Friday to 20 years in prison for the 2019 shooting death of a 17-year-old boy killed in the garage of his Fitchburg home during a marijuana robbery. The sentence for Myjee T. Sanders, 17, who was 15 at the time he shot and killed Shay...
FITCHBURG, WI・5 DAYS AGO
WFTV Channel 9 Orlando

Kimrey Sheehan, 60, allegedly drove her BMW toward her neighbor and his friend while sticking her middle fingers up at them.
PUBLIC SAFETY・19 HOURS AGO

FRESNO (CBSLA/AP) — A woman who recently won a $4.9 million settlement for the police killing of her 16-year-old son has been arrested on suspicion of using some of the money to buy guns for her younger son and his fellow gang members, authorities announced Friday. Christina Lopez, 42, of...
FRESNO, CA・18 DAYS AGO
New York Post

A California woman who was paid nearly $5 million in a settlement after her son was fatally shot by police officers was arrested for using the money to purchase guns for her other son and gang members. Christina Lopez, 42, of Madera, was one of 14 people arrested in a...
FRESNO COUNTY, CA・18 DAYS AGO
newstalk987.com

DECATUR, Ill. (WCIA) — Macon County Sheriff’s Office Investigations Division arrested 36-year-old Joseph Krol last Friday after he was accused of grooming a 15-year-old girl. According to Sergeant Scott Flannery, Krol was a former pastor of a local church in rural Decatur. He is no longer associated with this church. Sergeant Scott Flannery said detectives […]
9 DAYS AGO

DETROIT – Police have arrested two people in connection with the ambush and murder of a young couple who were sitting in their car with a 9-month-old child at a Detroit gas station. The shooting happened around 8:40 p.m. Monday (Oct. 18) at the Marathon gas station on West Warren...
DETROIT, MI・7 DAYS AGO
WIBC.com

EVANSVILLE, Ind. — Two people are dead in Evansville, one shot by police, after a drawn-out incident that started in the early afternoon on Tuesday. Police say Heidi Carter had met a woman on a dating app and invited her and her boyfriend over to her home where they engaged in drug use and sexual activity. But, as that was going on, Carter’s boyfriend, Carey Hammond, showed up and became angry. With Carter’s help, police say he tied up the man and then strangled and beat him.
INDIANA STATE・7 DAYS AGO
coosavalleynews.com

Titus Dewayne Daniel, 29 of Rome, was arrested this week after reports said he attempted to choke out another person before beating them in the face. Reports added that the victim was left with injuries to their neck and face. Officers stated that when they arrived on scene the suspect...
ROME, GA・10 DAYS AGO
NBC New York

An off-duty NYPD officer shot her girlfriend and another woman, killing the latter, after she discovered the pair together at a Brooklyn home on Wednesday, police said. The incident occurred around 5 p.m., at a home on 19th Avenue near 79th Street in Bensonhurst, according to police. The officer, who has not been identified, was at the home she shared with her 23-year-old girlfriend, when the other two arrived, police said.
BROOKLYN, NY・14 DAYS AGO

CLAREMONT (CBSLA) — The Claremont Police Department announced the identities of the 33-year-old woman and her 18-month-old daughter connected to the murder-suicide that occurred on Tuesday. Based on the initial investigation, police believe that Anabel Reyes-Becerra killed her daughter Arianny Reyes-Arevalo and then committed suicide. Police have not yet announced...
CLAREMONT, CA・12 HOURS AGO
cbslocal.com

PITTSBURGH (KDKA) — Pittsburgh Police say the man who officers used a stun gun on to take into custody in Bloomfield has died after suffering a medical emergency. According to police, the theft suspect died Thursday morning at a local hospital. Additional information on the man will be released by...
PITTSBURGH, PA・13 DAYS AGO
New York Post

The NYPD cop who shot a Bronx teen at “point-blank” range while kneeling on his back — then allegedly lied for years about the arrest to avoid being disciplined — has been fired, The Post has learned. Officer Danny Acosta was quietly dismissed from the department sometime in September, an...
BRONX, NY・18 HOURS AGO
WSB Radio

MINNEAPOLIS — (AP) — A former suburban Minneapolis police officer who has said she meant to use a Taser instead of a handgun when she shot and killed Daunte Wright in April is laying out her potential defenses ahead of her November trial. Attorneys for former Brooklyn Center Officer Kim...
MINNEAPOLIS, MN・13 DAYS AGO

OAKLAND — Two 20-year-old men have been arrested and charged with murdering a tow truck driver during an attempted robbery last June, court records show. Aaron Hein and Marco Dragula, both of Dublin, have been charged with murder and attempted second-degree robbery in the June 14 killing of 43-year-old Tim Nielsen, an Auburn resident.
OAKLAND, CA・1 DAY AGO
CBS LA

LOS ANGELES (CBSLA) — A woman involved in a three-car crash was shot and killed Wednesday, just a few blocks from another shooting in South Los Angeles. (credit: CBS) The collision happened at the corner of Jefferson Boulevard and San Pedro just after 11 a.m. Three cars were apparently involved in the crash, and several bullet holes were seen in the windshield of a maroon car. “It just happened so quick, a car flew by me and crashed and then a second comes right behind and crashes,” said a male witness who did not want to be identified. He added that after that...
LOS ANGELES, CA・7 DAYS AGO
clayconews.com

Woodstock, Georgia Woman facing multiple Charges including the Assault of a Police Officer after her Arrest in Leslie County, Kentucky

HYDEN, KY - The Leslie County Sheriff’s Office is reporting that on Saturday, October 9, 2021 while off duty, Deputy Kyle Crisp got behind Darcy Duchaine, from Woodstock, GA, driving a 2004 Toyota Corolla, traveling east on the Hal Rogers Parkway. Duchaine failed to maintain her lane of travel and passed other vehicles in no passing zones and blind curves. Deputy Crisp made contact with Deputy Bobby Roberts, who stopped Duchaine.
LESLIE COUNTY, KY・9 DAYS AGO
CBS Philly

PHILADELPHIA (CBS) — A Philadelphia police officer is now facing simple assault charges after the department says he punched a man during a fight. Officer Joseph Marion was arrested Wednesday and charged with simple assault, recklessly endangering another person, and disorderly conduct. According to the department, the arrest came from an internal investigation stemming from an April 18 altercation. During the fight, Officer Marion allegedly punched a man in the mouth with a closed fist. The two continued to struggle, and Officer Marion’s gun fell to the ground. A child picked up the weapon as the two fought. Marion never pointed the gun or threatened the other man. Officer Marion was recently assigned to the 22nd District. Police Commissioner Danielle Outlaw suspended him for 30 days with intent to dismiss him at the end of that period.
PHILADELPHIA, PA・6 DAYS AGO