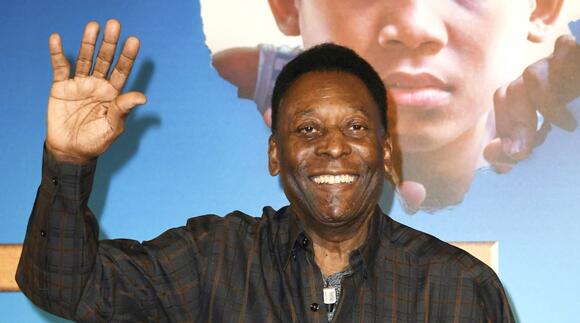 Pelé left the ICU following surgery for a tumor on his colon earlier this week, and ESPN reported that he had to return—something his daughter would not confirm.

Pelé is "recovering well" after undergoing surgery to remove a tumor from his colon, his daughter, Kely Nascimento, posted on Instagram Friday as reports surfaced that he had been readmitted to the intensive care unit.

Just three days ago, the 80-year-old Edson Arantes do Nascimento was released from ICU and moved into his own room at Albert Einstein Hospital, the Sao Paulo facility said in a statement . However, ESPN Brasil reported on Friday that he was readmitted to the ICU for acid reflux.

“He is recovering well and within normal range. Promise!” Nascimento said. “The normal recovery scenario for a man of his age after an operation like this is sometimes two steps forward and one step back. Yesterday he was tired and took a little step back.”

“Today he took two forwards!” she added, saying the photo had just been taken and did not give more details about his status aside from him being cold.

Pelé, a three-time World Cup champion, said in an Instagram message to fans on Tuesday after he was transferred that he was ready “to play 90 minutes, plus extra time” after leaving intensive care .

His surgery occurred on Sept. 4 after the tumor was discovered through routine exams at the end of August.

On the Mend: Tiger Woods Credits Fatherhood For Getting Him Through His Recovery After Car Crash

Golf champion Tiger Woods is still healing from his shocking February car accident. But his love for his children is what keeps him going. “Being a dad has helped him stay focused on his recovery,” a source told People. “At times, it’s been very difficult for him both physically and mentally. His leg injuries caused him extreme pain. He is a fighter and has been determined to get better though.”
GOLF・3 DAYS AGO
CrimeOnline

A friend of Brian Laundrie’s tells a British tabloid that he’d probably be able to get a fake identification to escape the United States illegally and could be hiding in South Africa or New Zealand, because he likes movies that were filmed in those countries. The unnamed friend told The...
CELEBRITIES・1 DAY AGO
The Independent

Tottenham’s plans for Sunday’s Premier League trip to Newcastle have been plunged into chaos after two players tested positive for coronavirus.Both men, who trained with the group on Thursday, were shown to have contracted Covid-19 after tests in the last 24 hours.The two unnamed players must now isolate for 10 days as per Government rules, keeping them out of the game at St James’ Park, a Europa Conference League match against Vitesse Arnhem and the London derby at West Ham next weekend.Putting in the work. 💪 pic.twitter.com/S8yx4fcoXy— Tottenham Hotspur (@SpursOfficial) October 14, 2021The club are understood to be confident that...
PREMIER LEAGUE・2 DAYS AGO
Insider

Vitesse fans were jumping up and down in celebration when the area they were occupying inside NEC Nijmegen's Goffertstadion buckled.
SOCCER・1 HOUR AGO