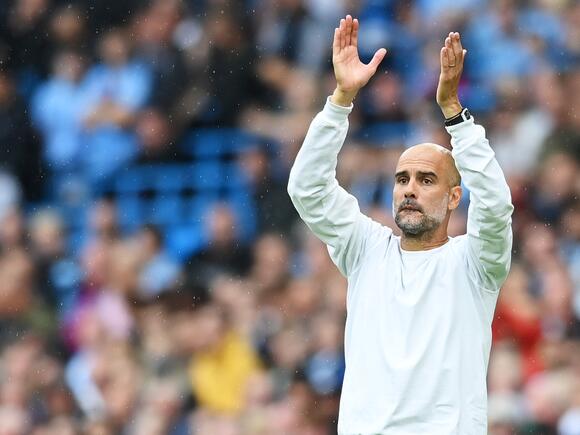 Pep Guardiola has said that he would leave Manchester City if the club’s supporters were not happy with him, yet insisted that his plea for more fans to attend the Etihad this weekend had been misinterpreted.

Guardiola called for “more people to come” to Saturday’s meeting with Southampton after 38,062 fans attended the 6-3 win over RB Leipzig earlier this week, around 17,000 short of the Etihad’s full capacity.

City’s attendances at Champions League games have tended to be lower than at weekend Premier League fixtures. The 5-0 wins over Norwich City and Arsenal both attracted around 52,000 fans, while an average of 54,219 attended league games last season.

Problems with a newly-implemented digital ticketing system at the Etihad have complicated matters this season, while large queues were visible outside the Etihad after kick-off as fans struggled to get into the ground.

Kevin Parker, general secretary of City’s official supporters’ club, publicly criticised Guardiola’s remarks, suggesting that the Catalan was out of touch and that he should focus on coaching.

Guardiola appeared visibly upset and frustrated with the row at Friday’s pre-match press conference and chose to call out Parker specifically on several occasions, believing that he, other City fans and the media had misinterpreted his remarks.

“That is what I am so upset and grumpy and disappointed that this guy [Parker] pretend to tell me what I have to say, what I have to do and I know exactly what were my intentions. But the same. When people are not happy with me, I will leave, that’s for sure.”

“Listen, I make a press conference every three days, you’re a journalist all of you, you can ask what you want and I will answer honestly, the best way.

“[I am] always defending my club and my people, my players, my staff, my backroom staff and the people who try honestly to do the best for this organisation.

“When there is something wrong, I will say it. When I don’t like something I say it. Here and privately. To my players. Because this is my job. This is what I get money for that. I have to take a decision every five minutes and I do it knowing in my head and my instinct what is the best for the club. Never put it above and beyond the club, never, ever.

Guardiola also refused to apologise for his remarks, insisting that he had only called on fans to attend as he expects Ralph Hasenhuttl’s Southampton to be difficult opponents for his players, especially given the intensity of the Leipzig win.

“Did I say after the game against Leipzig that I was disappointed because the stadium was not full? No. Interpretation is interpretation. I’m not going to apologise for what I said,” he said.

“I’m surprised about what happened with [Parker]. It’s not the first time in my career I’ve said it, the same at Barcelona and Bayern Munich. When you play a tough Champions League game, knowing that you have another in three days and that Southampton have had all week to prepare. I know how difficult it was against Ralph last season.”

Guardiola added: “I made an approach to do something together again on Saturday at 3pm. What I said is that we would love, and need their support. Whether it’s 10,000 people, 50,000 or 40,000 – it doesn’t matter how many come – I invite them to come and enjoy a game.

“We need their support. After five seasons, if the people can’t understand my behaviour it is because they want to misunderstand exactly what I said. I’m not going to apologise for a second because I was honest.”

Manchester City boss Pep Guardiola speaking to Match of the Day: "After the international break it’s always a little bit difficult to come to a rhythm and I know how good Burnley are. "They did really well, they have good players and we played a good 15-20 minutes in the...
PREMIER LEAGUE・11 DAYS AGO
chatsports.com

Pep Guardiola has offered his thoughts on Raheem Sterling’s future amid speculation he could leave Manchester City and move to Barcelona. The Catalan giants are reportedly interested in the England international who admitted on Thursday in an interview he wants regular football and could be tempted abroad. Guardiola told a...
PREMIER LEAGUE・12 DAYS AGO
Yardbarker

Guardiola joined City in 2016, following a trophy-laden three-year spell at Bayern Munich, and since arriving in the North-West of England, the Catalan has overseen the Sky Blues dominate the Premier League throughout his time in charge. Under the guidance of Pep Guardiola, Manchester City have won three Premier League...
PREMIER LEAGUE・14 DAYS AGO
CityXtra

The ongoing issues with the Premier League's South American stars and their trips back home for World Cup qualifiers is creating more problems than anticipated for the league's managers. With many of the countries red-listed for the UK, some players have had to quarantine for significant periods of time before...
PREMIER LEAGUE・12 DAYS AGO

Manchester City boss Pep Guardiola discusses Raheem Sterling's situation. Guardiola admits Sterling needs to prove himself on the pitch if he wants to find a place in his plans. The manager insists the England international knows the demands of being a City player and cannot expect any type of assurance...
PREMIER LEAGUE・11 DAYS AGO
SPORTbible

Manchester United legend Roy Keane claims that Raheem Sterling has “obviously [had] some bust-up” with Manchester City manager Pep Guardiola. Sterling arrived at City in 2015 and has lifted three Premier League titles, four League Cups and an FA Cup during his time at the Etihad. The 26-year-old winger, who...
PREMIER LEAGUE・13 DAYS AGO
FanSided

Manchester City ‘s injury storm and several players’ unavailability due to their extended international break could be a blessing in disguise for Raheem Sterling. He is confirmed to play in the front three by City’s manager Pep Guardiola in the pre-match press conference. Though City putting up a show thus...
PREMIER LEAGUE・11 DAYS AGO
newschain

Pep Guardiola hailed Bernardo Silva as extraordinary after champions Manchester City claimed a hard-fought 2-0 win over Burnley on Saturday. Silva, who was linked with a move away in the summer, has been in fine form in the opening months of the season and again stood out in an otherwise disjointed City display at the Etihad Stadium.
PREMIER LEAGUE・11 DAYS AGO

Manchester City manager Pep Guardiola is pleased to see his team get a win after the international break by beating Burnley 2-0. Watch Match of the Day on Saturday 16 October at 22:30 BST on BBC One, BBC iPlayer and the BBC Sport website and app.
PREMIER LEAGUE・11 DAYS AGO
ClutchPoints

Pep Guardiola sheds some light on the looming uncertainty regarding Manchester City winger Raheem Sterling. In England’s national team, Sterling boasts heavy minutes, often starting in every single marquee match. On the other hand, the winger’s minutes have recently diminished at City, opting for Guardiola to utilize other options on...
PREMIER LEAGUE・12 DAYS AGO
Daily Mail

Phil Foden has agreed a new six-year contract with Manchester City as a reward for his rapid rise under Pep Guardiola. The 21-year-old has become integral to the City team, starring as they reached a first-ever Champions League final last season. That was underlined last week when Foden was named...
PREMIER LEAGUE・15 DAYS AGO
chatsports.com

Manchester City will step up their pursuit of Erling Haaland with the club set for talks with his agent Mino Raiola in January over a move to the Premier League next summer. According to The Times, Haaland is now the top name on City's list of transfer targets and Pep Guardiola is looking for a new No 9 after the departure of Sergio Aguero last summer.
PREMIER LEAGUE・14 DAYS AGO

Silva has been keen on an exit for the past two years, with the 27-year-old open to starting a new challenge as he has entered his fifth season in Manchester. The Portugal international has played a key role in his side's success under Pep Guardiola, with City claiming three Premier League titles amongst a host of domestic silverware under the Catalan boss.
PREMIER LEAGUE・9 DAYS AGO
ClutchPoints

Man City manager Pep Guardiola fires back at Raheem Sterling’s recent comments regarding a possible transfer due to his contract issues with the club. Sterling has openly shared the possibility of signing to another club amid his lack of playing time for City this season. The English winger had a spectacular stint for his country in Euro 2020 but has had some difficulties consistently starting for his club.
PREMIER LEAGUE・12 DAYS AGO
chatsports.com

Manchester City 2-0 Burnley: Bernardo Silva and Kevin De Bruyne on target as Pep Guardiola's champions stay within touching distance of the top of the Premier League by beating dogged Clarets at the Etihad

Kevin De Bruyne celebrated wearing the Manchester City captain’s armband by scoring his first Premier League goal at The Etihad since May. De Bruyne, who has fallen behind Fernandinho, Ilkay Gundogan and Ruben Dias in the list of City skippers, was able to lead the team out because none of that trio started.
PREMIER LEAGUE・11 DAYS AGO
fourfourtwo.com

Manchester City will compete with Barcelona for the signing of Ajax’s Brazilian star Antony, say reports. The 21-year-old has started the season in fine form, scoring in the Champions League and earning his first senior Brazil caps. El Nacional writes that City boss Pep Guardiola recommended the player to Barca...
PREMIER LEAGUE・4 DAYS AGO
FanSided

Manchester City, despite not having a proper number nine in their ranks have done well to challenge for the title thus far and are already being considered as one of the favourites to lift the Premier League title. City are currently sitting third in the points table and are only...
PREMIER LEAGUE・8 DAYS AGO
CityXtra

The Premier League champions welcome the Clarets to the Etihad Stadium as they try and reduce the gap to the top of the table. Following Liverpool's emphatic 5-0 victory at Watford on Saturday, Pep Guardiola's side will be keen to return to winning ways after their 2-2 draw against Liverpool at the start of October.
PREMIER LEAGUE・11 DAYS AGO
chatsports.com

Manchester City wonderkid Cole Palmer scored a hat-trick for the club's under-23s side just a couple of hours after playing for Pep Guardiola's first-team on Saturday. The 19-year-old midfielder played the final few minutes of City's 2-0 win over Burnley at the Etihad Stadium, replacing Bernardo Silva in stoppage time at around 4.45pm on Saturday.
PREMIER LEAGUE・10 DAYS AGO
chatsports.com

Club Brugge 1-5 Manchester City: Pep Guardiola's side in sensational form as Riyad Mahrez scores twice and youngster Cole Palmer and full-backs Kyle Walker and Joao Cancelo are also on target as they end hosts' unbeaten run in competition this season

Bruges had a buzz about it over the last day or so, the restaurants and cafes full of locals desperate to discuss Kevin De Bruyne. Some even desperate to pass well wishes onto him, presuming anyone over from Manchester had the guy on speed dial. De Bruyne was born almost...
PREMIER LEAGUE・8 DAYS AGO