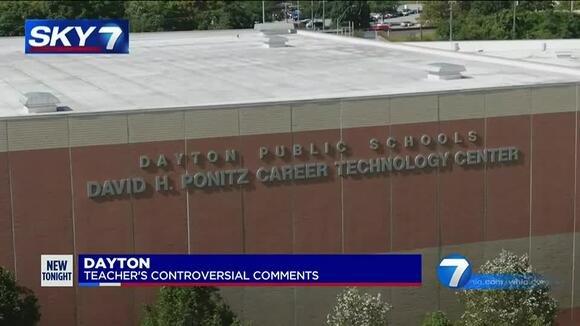 DAYTON — A Dayton Public Schools teacher is being accused of sharing what doctor’s call COVID-19 misinformation in a video posted online that was taken down by YouTube for “violating YouTube’s Community Guidelines.”

The video was a project for a broadcasting class at Ponitz High School and the district’s superintendent says what the teacher said on video was not appropriate for students.

“It’s not our job to push off our opinions and push off the beliefs that we have on our students,” Superintendent Elizabeth Lolli said.

In the video shared online, the Dayton Public Schools teacher is being interviewed as part of what school leaders said was a class project. The teacher makes claims about COVID-19, questioning testing practices by area providers, including Premier Health.

“All the numbers are fake,” the teacher said in the video.

Lolli said Ponitz’s principal viewed the video after it was posted on YouTube Thursday night. The principal then told staff not to show the video to the students.

“I think the person who was interviewed has a right to their opinion, I think they have a right to say what they believe to be true. However, I don’t think the interview itself was appropriate for the students to be engaged in,” Lolli told News Center 7 Friday afternoon.

Premier Health’s Dr. Roberto Colon said many claims the teacher made in the video amounted to bad information.

“We have enough of a hard time fighting this virus. We don’t also have to throw in bad information and disinformation campaigns. This is just something we should not have to deal with right,” Colon said.

Colon said the video was “disheartening.”

“We need to be utilizing science and data, not unproven hypotheses as to how how to defeat the virus,” Colon said.

Lolli said the district is investigating the situation and if there are any policy violations by anyone involved potential discipline could be issued.

Was the science being followed when Biden said, "You won't get Covid if you get the Jab." What about when Fauci said, "mask don't work."

You mean like the lefties do to your children behind closed doors at school indoctrinating them to believe what they want them to believe. Oh the hippocracy of the left.

no matter why one arrives in the emergency room (except say accident) if they get tested and they have covid..it is counted as a covid hospitalization. if later they die with another cause since they had covid it is counted as a covid death..dont believe me look it up at the CDC website . so of course the numbers are inflated..

DAYTON — The unions representing Dayton’s police officers and firefighters said the city is facing a potential “public safety nightmare” when the city’s vaccination policy goes into effect on Monday. Union leaders said firefighters and police officers will show up on the Nov. 1 deadline, but many may be unwilling...
DAYTON, OH・1 HOUR AGO
WHIO Dayton

‘Failure of early action and prevention’ cited as a main issue with unemployment fraud, overpayments

COLUMBUS — The Ohio Auditor cited “failure of early action and prevention” as one of five main issues that lead to failures in Ohio’s unemployment system that led to over $475 million in fraudulent and another $3.3 billion in overpayments during the coronavirus pandemic. The results of a 48-page audit...
COLUMBUS, OH・4 HOURS AGO
WHIO Dayton

OSCEOLA, Fla. — A schoolteacher in Florida has been removed from her classroom after allegations that the education made boys clean a bathroom. The alleged incident happened at Celebration K-8. Principal Rhonda McMahon told parents in a message that a group of third-grade boys was told to clean a restroom...
FLORIDA STATE・1 HOUR AGO
WHIO Dayton

LAS VEGAS — A woman in Las Vegas is facing federal charges after law enforcement officials said she dismembered her 70-year-old husband’s body and threw his remains in the trash. Nancy Shedleski is also accused of continuing to collect her husband’s Social Security benefits after his 2015 death, The Associated...
LAS VEGAS, NV・6 HOURS AGO