By Bevan Hurley
The Independent
28 days ago 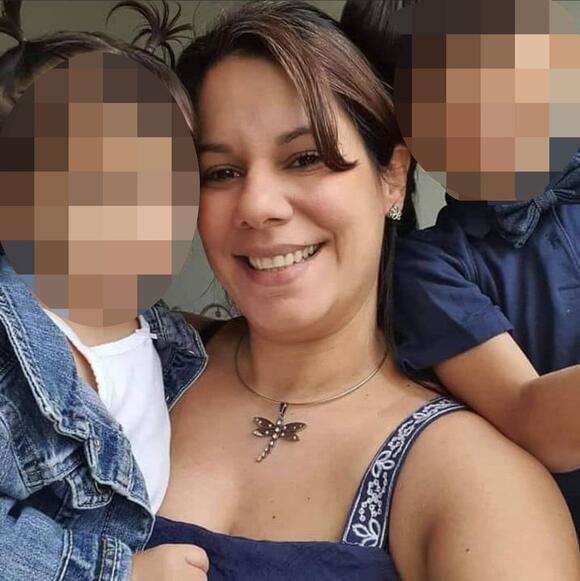 A maritime agency searching for survivors of a boating tragedy in Venezuela in which a mother kept her two children alive by breastfeeding them says a yellow vest located on a nearby island has a “high probability” of coming from the stricken vessel.

But rescuers say there is “minimal” hope of finding more survivors

Marielys Beatríz Chacón Marroquín, her husband and two children were among nine people who set out on a pleasure cruise aboard the Thor from Higuerote to Tortuga Island off the Caribbean coast of Venezuela on September 3.

Disaster struck soon after they departed when a wave smashed the boat’s hull, and those who survived the impact clung to lifeboats for four days in a desperate effort to survive.

Ms Chacón breastfed her two Jose David, 6, and 2-year-old Maria Beatriz, while consuming her own urine, according to a spokesman from Venezuela’s National Institute of Aquatic Spaces  (INEA).

She tragically died before rescuers could reach the lifeboat, suffering first degree burns and organ failure due to dehydration in the blazing heat.

Her two children were found clining to their mother’s dead four days after the shipwreck and were taken to hospital in the capitol city Caracas where they are being treated for first-degree burns, dehydration and post-traumatic stress.

Along with their nanny Verónica Martínez, 25, they are the only known survivors.

“The children made it because the mother breastfed them, she gave them breast milk probably right up until the moment she died,” said the INEA spokesman in an interview.

Their father Remis David Camblor is still missing along with four other people who were onboard, José Marcano, Alejandro Osorio, Vianney Dos Santos, and Juan Manuel Suarez.

It was initially thought only eight people were on board, but the father of Juan Manuel Suarez later confirmed he had also been on the fateful trip.

On Thursday, a non-governmental maritime agency searching for any trace of the Thor announced it had located a yellow vest on the island of Klein Curacao which it said had a “high probability” of coming from the boat.

Luis Guillermo Inciarte, a spokesman for the National Organization for Salvage and Maritime Safety of Water Spaces Venezuela (ONSA) told Univision “the possibility of getting people alive is minimal”.

Ms Chacón’s father said the voyage had been “simply a family trip to entertain the children,” La República reported.

What a woman. What a mother. What a beautiful human being. After so much we have seen, people like this lady makes us regain our faith in our specie.

This is what mothering does, it makes your children’s lives more important than your own❤️ May she RIP knowing she saved her babies🙏

This is awful. That mother did all she could to help her babies, she died doing what us mothers do. God Bless these children that survived they will have to live with those memories for the rest of their lives while missing their mom.

A mother and her young son are now safe after the toddler fell into an open manhole in a Union County park, prompting the mother to jump in to save him.
UNION COUNTY, NJ・22 DAYS AGO
The Independent

Survivors of a 2013 capsizing, one of the Mediterranean s more deadly migrant tragedies, on Sunday joined residents of a tiny Italian isle in an anniversary ceremony to honor the 368 people who died.Participants in the memorial tossed flowers into the crystalline waters off Lampedusa, a southern Italian island closer to North Africa than to the Italian mainland.Many of the dead in the Oct. 3, 2013 accident were Eritreans and Ethiopians. They were trapped in the boat when it overturned or drowned trying to swim ashore. The capsizing occurred just off an uninhabited islet and less than a kilometer...
ACCIDENTS・12 DAYS AGO
New York Post

‘We lived in constant terror’: Family believes they have the most albino members

The Guinness World Records have yet to confirm, but this British clan is fairly certain they have more albino members than any other living family. The current record-holding family has four albino members, but this brood boasts 15. Aslam Parvez and his brother were both living in Pakistan with albinism...
FAMILY RELATIONSHIPS・17 DAYS AGO
Fox News

A California woman accused of getting behind the wheel drunk and dragging her 8-year-old daughter clutching the side of the vehicle some 300 feet while pulling away is expected in court Monday. Erin Garcia, 44, of Laguna Niguel, California, is charged with assault with a deadly weapon, child endangerment and...
CALIFORNIA STATE・25 DAYS AGO

Police believe the family members died trying to save each other in the poorly ventilated shed where the grapes were fermenting.
ACCIDENTS・11 DAYS AGO
TheDailyBeast

Wife Films as Husband, Friend Are Swept to Sea After Cliff-Diving Goes Wrong

A Russian fitness coach’s rescue attempt of a friend trapped in churning Mediterranean waters turned deadly after both were swept out to sea—as the entire tragedy unfolded on video, captured by the coach’s distressed wife. The horrifying footage subsequently went viral on Russian social media, even as the coach’s family...
ACCIDENTS・18 DAYS AGO
Daily Mail

Four young men were captured pushing an elderly woman in her scooter through a Florida neighborhood on Sunday night after it broke down in the pouring rain. The photos of the generous young men were taken by Katty Castro, a public relations representative for the Florida Living Independent Community in Seminole County.
ACCIDENTS・4 DAYS AGO
International Business Times

A toddler in Scotland died in his father’s arms after battling a rare inherited condition for over a year. Rowan McDonald, 2, was diagnosed with Tay-Sachs disease when he was around six months old after his parents noticed he had not met the expected milestones by that age. Doctors had told the family it was unlikely that the child would live to see his fifth birthday. The toddler lost his fight Saturday, Glasgow Live reported.
HEALTH・3 DAYS AGO

Four Italian men between the ages of 40 and 70 perished while producing wine from their family vineyard over the weekend, according to Italy’s fire brigade. The men—Santino and Massimo Carnevale, aged 70 and 45, and brothers Giacomo and Valerio Scofano, aged 70 and 50— were all related and taking part in an annual winemaking tradition near the city of Paola in the southern region of Calabria. One of the victims, Valerio Scofano, was not supposed to be in the shed, having been condemned to house arrest in his home several miles away for stalking a former lover.
ACCIDENTS・11 DAYS AGO
International Business Times

Woman Who Is Not Terminally Ill To Die By Euthanasia: 'God Does Not Want To See Me Suffer'

A 51-year-old Colombian woman who suffers from a degenerative disease affecting her body's mobility will die by euthanasia this Sunday. Martha Sepúlveda Campo, who suffers from amyotrophic lateral sclerosis, or ALS, asked for a permit to die by euthanasia in Colombia on July 26. This was four days after the Colombian Constitutional Court expanded the right to the procedure to include patients who suffer “intense physical or mental suffering from bodily injury or serious and incurable disease,” according to the EFE agency.
HEALTH・6 DAYS AGO
International Business Times

A leopard reportedly mauled a 4-year-old girl to death after dragging her away while she was playing outside her house in India. The child lived with her family in the city of Nashik, in the western state of Maharashtra. Villagers and forest department officials searched for the girl after they were notified a leopard dragged her away Sunday night. The child’s family said she was taken away in the blink of an eye and the animal disappeared into the forest, UNI India reported.
ANIMALS・10 DAYS AGO
Fresno Bee

A boat crewman was jabbed by a 300-pound stingray off the New York coast, forcing the U.S. Coast Guard to launch a daring helicopter rescue in the dark late Sunday. It happened about 40 miles southwest of Montauk, according to a news release. The man was working aboard the Shelby...
ACCIDENTS・22 DAYS AGO
Big Frog 104

An Upstate New York community is mourning the devastating loss of a 4-year-old Turin boy in a tragic farming accident. Chandler Dolan died after being struck by a skid-steer. Someone was unloading a bale of hay when the boy ran behind the machine, according to the Lewis County Sheriff’s Office. The driver didn't see the child and struck him with the back tire.
TURIN, NY・22 DAYS AGO
International Business Times

Father Allegedly Throws His Children Into Well After Fight With Wife, Both Kids Die

A 30-year-old man in India allegedly killed his two children by throwing them into a well, and then attempted to end his own life after a fight with his wife. The incident took place Saturday night in the southern state of Tamil Nadu. The father, identified as Murugesan, allegedly pushed his two kids – 5-year-old daughter Rudrakshana and 3-year-old son Sri Kirshna – into a well after an argument with his 26-year-old wife, The Hindu reported.
RELATIONSHIPS・4 DAYS AGO
People

'Sweet' Toddler Hospitalized After Being Attacked by 2 Dogs: 'I Was Scared to Death,' Says Dad

A teenage truck driver ploughed into a group of Texas cyclists while allegedly attempting to blow smoke on them, and left several hospitalised on Saturday.According to Waller County Sheriff, six of the Houston area cyclists were hit by the vehicle, four of whom had to be taken to hospital, including two by helicopter.Chase Ferrell, who was part of the group of cyclists on the highway, told Fox 26: “I thought someone was dead.” “I heard a lot of crunching. I heard brakes. Tires screeching. People screaming,” he said.Mr Ferrell told the news outlet that a black diesel pickup truck...
ACCIDENTS・18 DAYS AGO
Insider

Livae Nanjikana and Junior Qoloni were traveling on the Solomon Sea in a 23-foot motorboat when a storm pushed them into the open water.
ACCIDENTS・4 DAYS AGO
International Business Times

A 38-year-old man in India was electrocuted while trying to charge his phone in a waterlogged room. His wife and 10-year-old son also met their demise while trying to save him. The incident took place Tuesday afternoon at a government housing complex in the Indian city of Kolkata, which was...
ACCIDENTS・23 DAYS AGO
The Guardian

A woman in Canada awoke in shock earlier this week when a rock crashed through the ceiling of her home and landed on her bed, narrowly missing her but spraying grit and other debris on her face, as her dog barked frantically. Police were called and the culprit was initially...
ACCIDENTS・1 DAY AGO
BBC

Mother-and-baby homes: 'One of the great scandals of our time'

Mother-and-baby homes: 'One of the great scandals of our time'. A panel has called for a public inquiry to be held into institutions for unmarried mothers in Northern Ireland. The three experts also advised that there should be immediate redress payments to survivors. The devolved government committed to an investigation...
SOCIETY・10 DAYS AGO