The Handmaid’s Tale: How many Emmy nominations does show have and will there be another season? 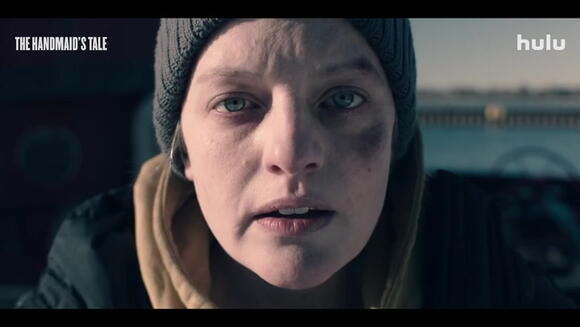 The Handmaid’s Tale is heading into the 2021 Emmys with 21 nominations.

This makes The Handmaid’s Tale the fourth most nominated show for this year’s ceremony.

Season four of the dystopian series aired this year. Hulu has renewed the programme for a fifth season, meaning fans can expect more episodes in the future.

The Handmaid’s Tale is the TV series adaptation of Margaret Atwood’s 1985 novel of the same name.

It is set in a near-future in which the US has become known as Gilead, an authoritarian republic in which women are deprived of bodily autonomy and reproductive rights. Some of them are made to serve as handmaids, meaning they are assigned to a couple and ordered to bear them children.

The Handmaid’s Tale is up for Outstanding Drama Series, alongside The Boys, Bridgerton, The Crown, Lovecraft Country, The Mandalorian, Pose , and This Is Us . Elisabeth Moss is nominated for Outstanding Lead Actress in a Drama Series for her performance as June Osborne. O-T Fagbenle, Max Minghella, Bradley Whitford, Madeline Brewer, Ann Dowd, Yvonne Strahovski, and Samira Wiley are all nominated as well.

"The Handmaid's Tale" author Margaret Atwood received backlash for sharing an article which some deemed "transphobic" but she has clarified her stance online.
BOOKS & LITERATURE・5 DAYS AGO
Business Insider

When you buy through our links, Insider may earn an affiliate commission. "Succession" is about the turbulent lives of a wealthy family running a media corporation. You can watch the season three premiere on October 17 on HBO Max. HBO Max is $10/month for an ad-supported plan or $15/month for...
TV SERIES・9 DAYS AGO
Westport News

With so many new dramatic series, Hulu’s “The Handmaid’s Tale: Season 4” somehow got put on a back-burner, begging to be binge-watched. That’s perhaps understandable since Bruce Miller’s loose cinematic adaptation of Margaret Atwood’s 1985 dystopian novel made its debut in April 2017 — perfect timing as the misogynistic religiosity of (fictional) Gilead matched the authoritarian conservatism of Donald Trump’s all-too-real assumption of the U.S. presidency.
WESTPORT, CT・5 DAYS AGO

Every scene in Maya and the Three is a feast for the eyes. Deep golds, shimmering blues and fierce reds meld beautifully in this Netflix series about the adventures of a Mesoamerican teen who’s more interested in polishing her fighting skills than attending to her royal duties. Created by The Book of Life director Jorge Gutiérrez, Maya and the Three is a grand fantasy adventure told in nine chapters, beginning on the day of the feisty protagonist’s coronation as princess of the Teca Kingdom. The first episode, “Chapter 1: Quinceañera,” opens with Maya (voiced by Zoe Saldana) recounting a tale that...
TV SERIES・2 DAYS AGO
GoldDerby

Believe it or not, Elisabeth Moss still doesn’t have an individual Screen Actors Guild Award to her name. A 15-time nominee, she has won twice as part of the “Mad Men” ensemble (2009-10), but she has lost all six of her solo bids, of which she earned two for “Mad Men” (2009, ’11) and and three for”The Handmaid’s Tale” (2018-20) for TV drama actress, and one for “Top of the Lake” (2014) for limited Series/TV movie actress. Back in the running for “Handmaid’s'” fourth season and currently in third place in our early SAG Awards odds, Moss is now vying...
CELEBRITIES・2 DAYS AGO
Hello Magazine

Another Life: will the show be back for season three?

Another Life's season two finale recently landed on the streaming service – leading fans to ask the same question: just when are we getting season three?!. Unfortunately, nothing has been confirmed about the future of the show just yet from showrunners or Netflix, but it is no cause for concern. While Netflix's major hits like Stranger Things and You might get instantly renewed, the streaming platform usually waits for several months to look at the show's popularity and audience reach before deciding on its future – so watch this space!
TV SERIES・3 DAYS AGO
cartermatt.com

Succession season 3: How many seasons could it really last?

Season 3 is one episode into its run and we know that for the rest of the year, there’s a lot of great stuff to be excited for. Yet, we can’t help but still look more towards the long-term future! That is a big part of being a TV fan; inherently, we often do find ourselves wanting more no matter the circumstance.
TV SERIES・2 DAYS AGO

The Roys are coming for the Screen Actors Guild. “Succession,” the popular HBO drama about the inner workings of a wealthy, dysfunctional family that owns and operates a major media conglomerate, is the current favorite to win the TV drama ensemble honor at the 28th Annual Screen Actors Guild Awards, which will be held in February. The show sits in first place in Gold Derby’s combined odds, which is surprising only because the guild has yet to acknowledge the show even exists. Created by Jesse Armstrong, “Succession” was lauded by critics in its first season but really started to break out...
MOVIES・15 HOURS AGO
Winter is Coming

How many episodes are in Doctor Who season 13?

It’s almost time to get back into the TARDIS with the Doctor and her crew. And this year, Doctor Who will be special for quite a few reasons. The biggest thing that’s special about Doctor Who season 13 is that it will be the final season where we see Jodie Whittaker as the Thirteenth Doctor. For two seasons, she’s brought along Yaz, Ryan, and Graham with her on her adventures. But in her final outing, it’ll be just her and Yaz, along with the brand new companion, Dan.
TV SERIES・1 DAY AGO
Fox News

Author Margaret Atwood faced backlash from progressives after sharing a column about the erasure of women. On Tuesday, "The Handmaid’s Tale" author posted an opinion piece on her Twitter account from the Toronto Star titled, "Why can’t we say ‘woman’ anymore?" The article wrote that "’Woman’ is in danger of becoming a dirty word" due to social justice political correctness.
BOOKS & LITERATURE・5 DAYS AGO
GoldDerby

Actor Peter Scolari is dead at age 66 after a two-year battle with cancer. He starred alongside Tom Hanks in “Bosom Buddies” for two years in the early 1980s for ABC. He then followed up with a long-running role as a small town TV producer opposite Bob Newhart on “Newhart,” which brought him three Emmy nominations. He finally won an Emmy Award in 2016 as Best Comedy Guest Actor after initially not even being nominated. Following Gold Derby’s reporting that summer (see report here), Peter MacNicol was deemed ineligible for “Veep” due to appearing in too many episodes of that HBO...
CELEBRITIES・2 DAYS AGO

How Many Episodes Will Season 1 of The World's Finest Assassin Have?

Comedy legends Steve Martin and Martin Short have been friends for over 35 years, so their instant chemistry on screen in Hulu’s freshman comedy series “Only Murders in the Building” surprised nobody. Introducing Selena Gomez as their ‘third amigo’ on the series, though, proved to be a stroke of genius for this hilarious send-up of true crime podcasts. Going toe-to-toe with Martin and Short, Gomez anchors their antics with a mysterious and charismatic performance. Set in an envy-inducing New York apartment building on the Upper West Side, “Only Murders in the Building” draws Martin, Short, and Gomez’s three mystery podcast enthusiasts...
CELEBRITIES・4 DAYS AGO
Variety

“You” began by reversing the equation of Golden Age TV dramas. And three seasons in, its act is getting tired. The show, starring Penn Badgley as Joe, a stalker and killer to whose internal monologue we have access, is difficult to compare to series like “The Sopranos” and “Breaking Bad” but for one particular. Those shows, in exploring central characters who did monstrous things, ended up with fan bases who rooted for the bad guy. On “You,” the viewer is asked first to root for the bad guy, and, in doing so, then to get to know him. This has been a...
TV SERIES・10 DAYS AGO
Variety

Peter Scolari’s ‘Girls’ Performance Was Central to the Show’s Triumph: An Appreciation

Peter Scolari, who died Friday at 66, had a long and decorated acting career, with starring roles in “Bosom Buddies” and “Newhart.” But a late triumph — and the performance for which, for many, he’ll be most widely remembered — was his Emmy-winning turn on HBO’s “Girls.” As Tad, Hannah Horvath’s father, Scolari brought rare sensitivity and care to a tricky character who evolved radically through the show’s run. It took a great actor to pull off some of the shifts in Tad Horvath over the seasons of “Girls,” but those shifts always felt, in Scolari’s telling, like the evolution...
TV & VIDEOS・2 DAYS AGO
Cosmopolitan

How Many Episodes of ‘The Bachelorette' Are We Getting This Season? Here’s What We Know

If you’re on the full steam train that is Bachelor Nation, then you know good and damn well that (1) there is never any getting off (SOS 😭), and (2) Michelle Young’s season of The Bachelorette premieres TONIGHT! That’s right—the wait is officially over. BiP kept us entertained through the summer, but now we are ready to cozy up and watch this gal date 30 men at one time find true love. Without further ado, here’s what you need to know about tuning in to the show this season.
TV & VIDEOS・5 DAYS AGO
digitalspy.com

From The Fresh Prince of Bel-Air to Game of Thrones, The Walking Dead to Worzel Gummidge, taking a popular title and spinning it into something fresh isn't new, but it's certainly never been more prevalent. And popular US sitcom That '70s Show, which already has one spin-off (That '80s Show) and a British remake (Days Like These) to its name, has inspired yet another offshoot.
TV SERIES・13 DAYS AGO
TheDailyBeast

Margaret Atwood, the celebrated author of feminist dystopian novel The Handmaid’s Tale, angered some of her fans this week when she tweeted out an op-ed by another writer titled, “Why can’t we say ‘woman’ anymore?” While Atwood did not post a comment about the Toronto Star column, her followers saw her tweet as an endorsement of the message, which argued against gender-neutral language. Replies ranged from “Welp, that’s an unfollow,” to claims that she was being transphobic to mocking comments like, “Oh no you’re right I just tried to say it and a bunch of non-binary people stormed into my apartment and made me throw out my dresses.” Atwood did not back down, later tweeting that the op-ed author, Rosie DiManno, is “not a terf,” the acronym for trans-exclusionary radical feminist.
BOOKS & LITERATURE・5 DAYS AGO