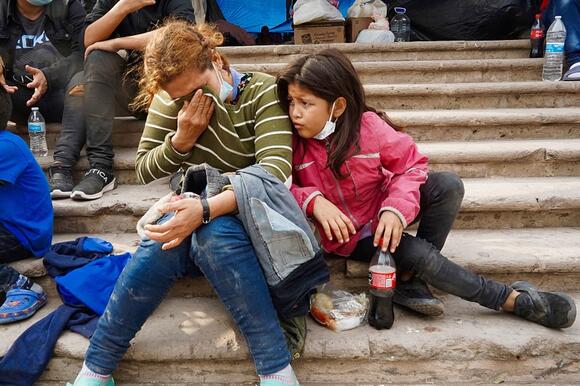 The Biden administration is appealing a federal court ruling that halts the use of a public health order to quickly expel migrants with children who are stopped along the U.S.-Mexico border.

In a filing Friday, administration lawyers announced their decision to bring the case before the U.S. Court of Appeals for the District of Columbia.

U.S. District Judge Emmet Sullivan on Thursday had given the government two weeks to stop its use of Title 42, a 1944 health statute used originally by the Trump administration to close the border to "prohibit ... the introduction of" people to the country because of concerns about the spread of the coronavirus.

The case focuses on families with children, meaning the administration can continue to expel single adults under the provision.

After Sullivan's ruling, advocates were hopeful that government officials would choose to rescind the policy.

"It's extremely disappointing that the Biden administration is willing to fight tooth and nail to uphold President Trump's xenophobic immigration policies," said Noah Gottschalk, Global Policy Lead for Oxfam America, which is among the groups challenging Title 42. "Despite this appeal, we know the law is on our side and we will keep fighting with our co-counsel on behalf of refugees."

Sullivan granted a preliminary injunction in response to a lawsuit filed by the American Civil Liberties Union and other groups on behalf of migrant families, deciding they were likely to succeed on their challenge to the use of Title 42. He delayed the effects of the order for two weeks to give the administration time to appeal.

In his 58-page ruling, Sullivan said the the statute doesn't permit the expulsion of people who have already entered the country. He found that migrant families subjected to the policy are deprived of statutory rights to seek protection in the U.S. and "face real threats of violence and persecution."

In recent months, Mexico has accepted fewer migrant families with children, and the U.S. has allowed more to stay in the country as they pursue asylum.

Among the 86,000 migrant parents who crossed the border with their children last month, roughly 16,000 were immediately expelled, according to government statistics.

Customs and Border Protection said that one quarter of the 209,000 people it encountered in August had been stopped at least once over the previous year, compared with 14% in earlier years.

The ACLU and other advocacy groups launched their legal challenge to Title 42 in January, just before Trump left office. They spent months in settlement negotiations with the Biden administration but resumed the litigation after federal officials signaled they had no immediate plans to rescind the policy.

"We wanted the Biden administration to do the right thing in January," Gottschalk said. "This all could've been avoided."

In January, the D.C. circuit court agreed to temporarily lift the lower court's decision, but the Biden administration later decided to exempt children who arrive without a parent from Title 42.

White House press secretary Jen Psaki said President Biden's approval ratings are so low because people are "tired of fighting" the coronavirus pandemic, which Biden promised to "shut down" during the 2020 campaign. A reporter asked Psaki during the White House's Friday press conference why the president's approval ratings have...
PRESIDENTIAL ELECTION・15 HOURS AGO
KGUN 9

PHOENIX — Arizona Attorney General Mark Brnovich has requested a temporary restraining order in an effort to stop the Biden Administration from mandating COVID-19 vaccines for certain groups. On Friday, Brnovich filed an amended complaint to extend his lawsuit to stop the Biden Administration for what he calls unconstitutional and...
ARIZONA STATE・20 HOURS AGO
buzzfeednews.com

A Judge Said It Was "Offensive" That A Man Who Threatened Democrats And "Tech Execs" On Jan. 6 Claimed To Be A Victim Of Racism

WASHINGTON — Troy Smocks, a Texas man who posted on the social network Parler on Jan. 6 urging supporters of former president Donald Trump to “go hunting” for Democrats, tech executives, and others, was sentenced on Thursday to 14 months in prison. The sentence from US District Judge Tanya Chutkan...
CONGRESS & COURTS・1 DAY AGO
CNET

For the most up-to-date news and information about the coronavirus pandemic, visit the WHO and CDC websites. The White House is currently reviewing the Occupational Safety and Health Administration's employer vaccine rule for final review. Once it's approved, companies employing 100 or more people will need to require their workers to get the COVID-19 vaccine or get tested for the deadly disease at least once weekly, as part of a new vaccination mandate issued by President Joe Biden in September. The requirement is designed to curb the surge in coronavirus cases, hospitalizations and deaths caused by the delta variant.
U.S. POLITICS・19 HOURS AGO

The Biden administration, in its final pitch to block Texas' ban on most abortions, is warning the Supreme Court that none of its decisions would be safe if it allows the state law to remain in force.
TEXAS STATE・21 HOURS AGO
CNBC

More than 7,000 migrants expelled from U.S. by the Biden administration faced kidnappings, other attacks, report says

Roughly 7,600 migrants expelled from the U.S. under a Trump-era pandemic policy have been subject to kidnappings and other attacks since President Joe Biden took office. This includes migrant families, adults and children who were kidnapped, trafficked for sexual exploitation, extorted or repeatedly robbed after being deported to Mexico under the policy known as Title 42.
POTUS・1 DAY AGO
Los Angeles Times

Texas on Thursday urged the Supreme Court to leave in place its law banning most abortions and told the justices there's no reason to rush into the case.
TEXAS STATE・1 DAY AGO

Questioning whether a right to abortion even exists, Texas asks the Supreme Court to reject a challenge to its strict law and overturn Roe vs. Wade.
TEXAS STATE・1 DAY AGO
Boston

“The order itself contains and enforces the racist trope that migrants are vectors of disease." Scores of doctors at Massachusetts General Hospital are calling on CDC Director Dr. Rochelle Walensky to reconsider the use of a public health order that is being employed by federal agencies to rapidly expel migrants from the U.S. border without giving them the chance to apply for asylum.
BOSTON, MA・1 DAY AGO
Los Angeles Times

A 9th Circuit Court of Appeals panel has overturned a requirement for ICE detainees at risk of COVID-19 to be monitored and possibly released.
CONGRESS & COURTS・2 DAYS AGO
KTLA

The U.S. House is expected to hold Steve Bannon in contempt of Congress. It’s up to the Justice Department, and the courts, to determine what happens next. As lawmakers ready a Thursday vote to send a contempt referral to the U.S. attorney’s office in Washington, there’s considerable uncertainty about whether the Justice Department will prosecute […]
CONGRESS & COURTS・2 DAYS AGO

MINNEAPOLIS (AP) - The Biden administration dealt a serious blow Wednesday to the proposed Twin Metals copper-nickel mine in northeastern Minnesota, ordering a study that could lead to a 20-year ban on mining upstream from the Boundary Waters Canoe Area Wilderness. The U.S. Forest Service filed an application with the...
U.S. POLITICS・2 DAYS AGO
Fox News

Sen. Josh Hawley, R-Mo., spoke with "Life, Liberty & Levin" host Mark Levin about the Department of Justice's memo which announced the FBI will take the lead on a task force to address threats against school officials, including creating a centralized way to report such threats. The Missouri Republican talked...
CONGRESS & COURTS・13 DAYS AGO
Union Leader

WASHINGTON - A U.S. appeals court on Friday temporarily reinstated Texas's near-total ban on abortion, dealing a setback to abortion rights advocates and the Biden administration. The U.S. Court of Appeals for the Fifth Circuit, an intermediate appeals court, said it was putting on hold a lower court ruling from...
TEXAS STATE・14 DAYS AGO
San Antonio Current

The 5th U.S. Circuit Court of Appeals late Friday temporarily allowed Texas’ near-total abortion ban — the strictest in the nation — to again be enforced after freezing a federal judge’s temporary block of the law. The state appealed the order just two days after it was issued. A panel...
TEXAS STATE・14 DAYS AGO
Newsweek

What World Does The Biden Administration Live In? | Opinion

Since Biden took office, he and his staff have engaged in a peculiar strategy. Rather than acknowledge problems, the administration pretends they don't exist.
PRESIDENTIAL ELECTION・2 DAYS AGO
WWD

Click here to read the full article. A number of major news organzations have urged the Court of Appeals to rethink its September decision to partially revive a defamation suit by California Rep. Devin Nunes against journalist Ryan Lizza and Hearst Magazines over a 2018 Esquire story on Nunes’ family farm. The story, titled “Devin Nunes’s Family Farm Is Hiding a Politically Explosive Secret,” alleged that the congressman’s family had moved the dairy farm from California to Iowa, in a town that is heavily reliant on undocumented labor. A district court judge originally tossed out the suit, but in September, the...
CONGRESS & COURTS・19 HOURS AGO
Modern Healthcare

A federal appeals court dealt another blow to a lawsuit targeting Maine's COVID-19 vaccine mandate for healthcare workers, resulting in an 11th-hour appeal to the U.S. Supreme Court on Wednesday. A three-judge panel of the 1st U.S. Circuit Court of Appeals declined to stop the vaccine requirement, saying a lawsuit...
U.S. POLITICS・2 DAYS AGO
CNN

New York (CNN Business) — President Joe Biden's vaccine order will force employers to lay off thousands of workers, making the supply-chain crisis much worse, a major business group warned the White House this week. The National Association of Wholesaler-Distributors, an influential trade group that represents an industry with nearly...
POTUS・22 HOURS AGO