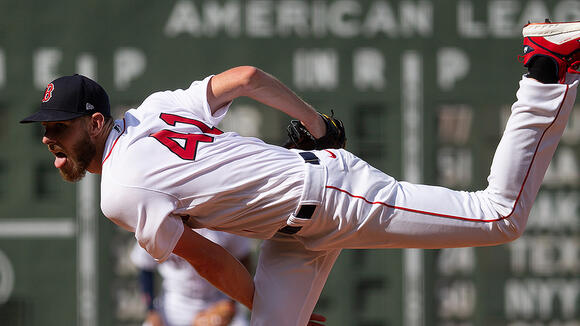 BOSTON (CBS) — The Red Sox will have their ace back on the hill as the team starts its final homestand of the season. Chris Sale will toe the rubber against the Orioles on Friday night.

Sale hasn’t pitched since Sept. 6, after he was placed on the COVID list on Sept. 10 after testing positive for the virus. He had to miss a minimum of 10 days under MLB protocols.

Boston manager Alex Cora said that Sale will not be on a pitch count or limit on Friday night, and that the lefty is OK to pitch on four days rest going forward.

Sale missed the entire 2020 season as he recovered from Tommy John surgery, and did not rejoin the Boston rotation until Aug. 14. He has made five starts since returning, going 3-0 with a 2.52 ERA while striking out 30 batters over 25 innings of work.

After Sale starts Friday, Nick Pivetta will be on the hill for Boston on Saturday, followed by Nathan Eovaldi in Sunday’s series finale. Eduardo Rodriguez will start Tuesday when Boston begins its two-game set with the Mets.

Boston Red Sox fans let Kyle Schwarber have it for letting a pop-up land on the infield, and he probably had it coming. If you let Schwarber play first base long enough, something like this was bound to happen. The Sox knew this when they acquired him from the Washington Nationals, and they sure as hell didn’t trade for him because of his defensive ability.
MLB・29 DAYS AGO
NJ.com

The internet never forgets. Former New York Yankees slugger Alex Rodriguez has been covering the 2021 MLB playoffs by resuming his role as a studio analyst for FOX Sports. Last week, Rodriguez was analyzing the American League Division Series between the Boston Red Sox and Tampa Bay Rays with David Ortiz, Frank Thomas and Kevin Burkhardt. The gang was discussing a video clip from Game 1, when the Rays were seen eating popcorn in the dugout during the seventh inning of their 5-0 win.
MLB・10 DAYS AGO
FanSided

Chris Sale was called upon for the Boston Red Sox in Game 2 of the ALDS against the Tampa Bay Rays in what was his first postseason start since the 2018 World Series. Sale did not turn back the clock with a vintage performance but rather had an outing that he sure would like to forget.
MLB・14 DAYS AGO
USA TODAY

A 5-month-old became an instant sensation after an appearance on the Fenway Park videoboard, inspiring several creative chants from the crowd.
MLB・3 DAYS AGO
CBS Boston

BOSTON (CBS) — Laz Diaz made a strike call so bad on Tuesday night that he let Alex Cora come out and scream about it without ejecting the Boston manager. If only Cora and Boston knew what was to come later on in the evening. In the top of the ninth inning, with Game 4 of the ALCS between the Red Sox and Astros tied at 2-2, Nathan Eovaldi was looking to pitch out of his own jam and end his relief appearance with a curveball to pinch hitter Jason Castro. Eovaldi threw the perfect pitch, and he began his walk to...
MLB・4 DAYS AGO
NESN

Chances are if you’re watching Wednesday’s Game 5 between the Red Sox and Houston Astros then Boston pitcher Chris Sale had you extremely fired up after the top of the fourth inning. The Red Sox left-hander, who clearly was putting added emphasis in Game 5 given his previous struggles this...
MLB・3 DAYS AGO

BOSTON (CBS) – Anthony Espinal was headed to Bleacher Bar at Fenway Park to watch the Red Sox play Game 4 of the American League Championship Series when the roar of the crowd caught his attention. It was the bottom of the first inning. Fans were reacting to a go-ahead home run that had just left Xander Bogaerts’ bat and was sailing over the Green Monster. “We were walking to the Bleacher Bar and we heard the roar of the fans. Some guy points up. I look up and I see the ball. I’m like ‘Someone’s going to be lucky enough to...
MLB・3 DAYS AGO
Over the Monster

The Red Sox were supposed to have Chris Sale back in the rotation as their ace in the hole for the second half and into this postseason. Instead, his status in coming back from Tommy John is leaving them in a conundrum. (Alex Speier; Boston Globe) Pedro Martinez had one...
MLB・13 DAYS AGO
Sportsnaut

Some heroics from Nick Pivetta out of the bullpen in Game 3 of the American League Division Series on Sunday have left the Red Sox with an adjustment for Monday. Eduardo Rodriguez is likely to start Game 4, manager Alex Cora said after the Sox’ 6-4 walkoff win over the Rays.
MLB・13 DAYS AGO

Chris Sale will be rejoining the Boston Red Sox rotation for the American League Championship Series against the Houston Astros, which is slated to begin Friday. "He's still in the rotation. He's going to be a big part of what we're trying to accomplish," Red Sox manager Alex Cora said, according to Alex Reimer of WEEI.
MLB・9 DAYS AGO
MassLive.com

HOUSTON — Red Sox ace Chris Sale lasted just one inning in his Game 2 ALDS start vs. the Rays last Friday. He allowed a grand slam to Jordan Luplow and the Red Sox fell behind 5-2 in the first inning. “You feel lesser than dirt — or I do,...
MLB・9 DAYS AGO
Yardbarker

The Red Sox have set their starting rotation for the first two games of their American League Series clash against the Astros in Houston. Chris Sale has been named Boston’s Game 1 starter, while Nathan Eovaldi has been named Boston’s Game 2 starter, Sox manager Alex Cora announced when speaking with reporters from Minute Maid Park on Thursday evening.
MLB・9 DAYS AGO
providencejournal.com

Just how will the Red Sox use Chris Sale in the ALCS? Red Sox skipper Alex Cora isn't giving any clues

BOSTON — Alex Cora declined to name a starting pitcher for the opening two games of the American League Championship Series against the Astros. The Red Sox manager demurred when asked the question prior to a team workout Wednesday afternoon at Fenway Park. Boston is scheduled to open Game 1 against Houston on Friday night.
MLB・10 DAYS AGO
MassLive.com

Did Boston Red Sox’s Chris Sale ‘find it’ in bullpen like David Price did in 2018? Alex Cora hopes so

BOSTON — Manager Alex Cora would not say whether Chris Sale will be used as a starter or reliever in the ALCS vs. the Houston Astros. “He’ll pitch. Yeah, he’ll pitch,” Cora said, smiling. “He’ll be part of this and he’ll be an important part of this.”. Game 1 is...
MLB・10 DAYS AGO
NESN

BOSTON -- Red Sox righty Nick Pivetta threw 73 pitches in relief Thursday night, but that’s not stopping manager Alex Cora from penciling in the righty for Game 4 of the ALDS against the Rays. After Nathan Eovaldi pitches Game 3 on Sunday afternoon, Pivetta “most likely” will get the...
MLB・13 DAYS AGO
WEEI Sports Radio

Alex Cora wasn't fooling around. The Red Sox manager made a beeline for the chair for his American League Championship press conference, sat down and waited exactly 15 seconds before answering a question before any were asked. "We're going Chris and we're going Nate. Chris is starting Game 1. Nate...
MLB・8 DAYS AGO