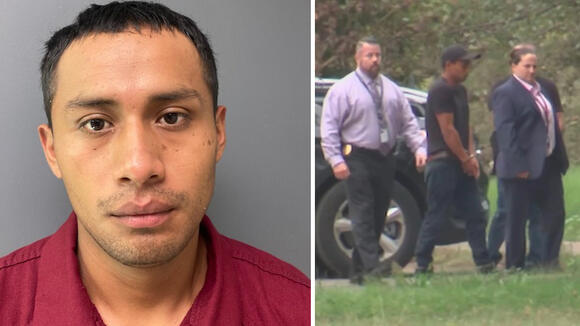 A man has been charged with murder for the death of his ex-wife after he allegedly confessed to the killing and told police where to find the body. Freddy Remigio Mendieta Pando, 23, of the 200 block of Copley Road in Upper Darby, has been charged with first-degree murder and related charges for the death of 23-year-old Karina Torres, also of Upper Darby. 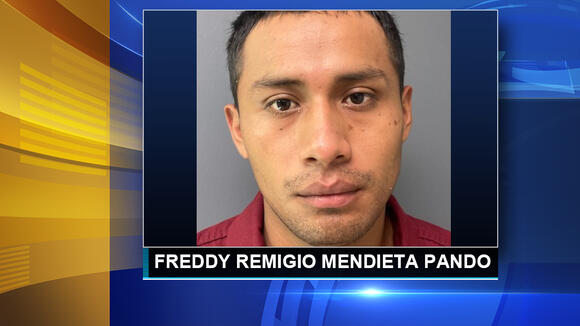 Torres' body was found Thursday afternoon near the Schuylkill River Trail in Lower Providence Township, Montgomery County. District Attorney Kevin Steele said Mendieta Pando walked into the Upper Darby Police Department around 11:50 a.m. Thursday and told them, through a translation app on his phone, "I killed my partner." Mendieta Pando pointed to a location on a map where detectives could find the body, Steele said. Officers found Torres deceased in a wooded area about 15 feet off the trail near the Betzwood Trailhead. Action News was there as the suspect led investigators to the body while he was secured in handcuffs and shackles. An autopsy performed Friday found that Torres died of multiple stab wounds. "Now we have a young woman, a mother, who leaves a 4-year-old child without a parent," Steele said. Once her body was discovered a search warrant was conducted at the suspect's home. The couple used to live there together. That came to an end after Mendieta Pando was arrested for an assault on Torres this past July. He was charged with strangulation, terroristic threats and simple assault. Mendieta Pando was released after posting $2,500 bail, officials said. After that, documents show, Torres obtained a Protection From Abuse order again her ex. A hearing for the PFA was scheduled for Thursday. Officials say they're not sure why, given the circumstances, the victim was out on the trail with the suspect. Mendieta Pando is being held without bail. Anyone with information regarding this incident in Lower Providence Township is asked to call the Montgomery County Detectives' Tip Line at 610-278-DOIT (3648).

Order of protection do not work....and why victim blame ...in the article they are "unsure why she was with him on that trail", maybe he kidnapped her and held the knife to her.

Officer injured in shootout with homicide suspect released from hospital

According to a tweet by Philadelphia Police Commissioner Danielle Outlaw, Arcenio Perez, 30, was released from Penn Presbyterian Medical Center after sustaining a gunshot wound to the elbow from a rifle round.
PHILADELPHIA, PA・2 DAYS AGO

A Voorhees man has been charged in connection with a deadly pedestrian crash in Mercer County. The crash happened at the intersection of Route 1 and Bakers Basin Road in Lawrence Township.
LAWRENCE TOWNSHIP, NJ・2 DAYS AGO
6abc Action News

Police: Man abducted woman after running her car off the road in Bethlehem

Police say the suspect forced the victim over to the passenger seat, got into the driver's seat, and then intentionally crashed the vehicle.
BETHLEHEM, PA・3 DAYS AGO
6abc Action News

At least two Upper Darby School District students have been suspended after shooting their classmates with an airsoft pellet gun while onboard a school bus.
UPPER DARBY, PA・1 DAY AGO

Arrest made after store clerk attacked in Cheltenham Township, Pa.

"We had put our first dog out at 6 o'clock, and by 8 o'clock we had located the subject," said Craig Snyder, who leads the ChesCo Search Dogs.
CHESTER COUNTY, PA・2 DAYS AGO
6abc Action News

It happened back on August 19 when Mike McCloskey said he heard a scream for help at the Drexel Swim Club. MARPLE TWP., Pennsylvania (WPVI) -- The Marple Township Commissioners and police department issued high praise for two individuals who saved a 21-month-old toddler over the summer. It was back...
MARPLE TOWNSHIP, PA・4 DAYS AGO