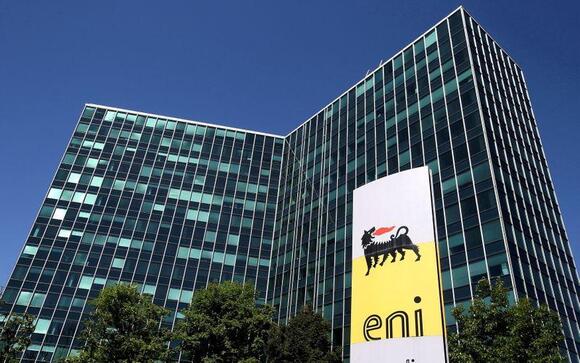 MILAN (Reuters) -Italian energy group Eni is working with JP Morgan to sell a minority stake in its power generation unit Enipower to help it fund its shift to a low-carbon business, sources said.

Non-binding bids are expected in two to three weeks, one of the sources said, adding the group was looking to sell a stake of around 40%.

The second source said infrastructure and investment funds had expressed an interest in the deal but no industrial players had as yet come forward.

A stake of up to 49% could be worth as much as 600 million euros ($704 million), the source said, but added selling fossil fuel assets in the energy transition was more difficult than in the past.

Eni, which has pledged to be carbon neutral by 2050, is restructuring its business as it transitions into renewable energy and gradually tapers off its oil and gas output.

It has merged its retail and renewable businesses and is working on a possible listing of the unit next year.

Enipower operates five gas-fired Combined Cycle Gas Turbines (CCGT) plants and one co-generation plant in Italy for an overall capacity of around 5 gigawatts.

JP Morgan has announced the launch of Digital Bill Payment, powered by Paymentus, a provider of cloud-based bill payment technology and solutions. With Paymentus, the firm will equip businesses with a single platform for customer engagement, bill presentment, and payments. This solution is part of the firm’s efforts to help clients digitise the entire receivables journey—via new services like request to pay and upcoming solutions aimed at automating the acceptance of virtual card payments.
BUSINESS・16 HOURS AGO
Reuters

MELBOURNE, Oct 28 (Reuters) - Hydrogen could make up around one-third of global seaborne energy trade by 2050 from zero now as countries consider the fuel source as a way to achieve net-zero carbon emissions, according to forecasts from consultants Wood Mackenzie. WoodMac sees global demand for hydrogen reaching 530...
ENERGY INDUSTRY・2 HOURS AGO

(Adds more details on the IPO) Oct 27 (Reuters) - Chipmaker GlobalFoundries Inc on Wednesday sold shares in its initial public offering at $47 a piece, at the higher end of its targeted price range, to raise about $2.6 billion, people familiar with the matter said. The IPO gives GlobalFoundries...
MARKETS・1 HOUR AGO
Reuters

BOGOTA (Reuters) - The coal industry was not quick enough to explain the potential of clean technologies that can give the fossil fuel a place in a sustainable energy matrix, Michelle Manook, chief executive of the World Coal Association (WCA), told Reuters on Wednesday. Coal is considered a heavy polluter...
ENERGY INDUSTRY・2 HOURS AGO
Reuters

MILAN, Oct 27 (Reuters) - Telecom Italia's (TIM) top investor Vivendi is committed to supporting Italy's biggest telecoms group despite its disappointing financial results, a source close to the French media group said on Wednesday. The comments came after TIM posted a decline in revenues and core profits for the...
BUSINESS・4 HOURS AGO
Reuters

MILAN (Reuters) - Telecom Italia (TIM), Italy’s largest telecoms company, on Wednesday said it had further cut its 2021 core profit guidance to reflect worsening market conditions. It said its board had discussed a possible reorganisation to extract value from the group’s assets and asked CEO Luigi Gubitosi to continue...
FINANCIAL REPORTS・3 HOURS AGO

BEIJING, Oct 28 (Reuters) - China’s state planner said on Thursday that it had met with coal producers and the sector’s industry association on Wednesday to study standards and identify methods of profiteering. The announcement by the National Development and Reform Commission’s (NDRC) comes a day after it said it...
INDUSTRY・9 MINUTES AGO
Reuters

LONDON, Oct 28 (Reuters) - Lloyd's of London said on Thursday it would join peers in scaling up efforts to cut carbon emissions and push members of the commercial insurance market to do the same, days before international climate talks get underway in Scotland. Lloyd's has long been seen as...
ENVIRONMENT・2 HOURS AGO
OilPrice.com

Italian oil and gas major Eni plans to seek a valuation of up to $17.4 billion for its renewables and retail business in the initial public offering of the unit next year, sources with knowledge of the matter told Bloomberg on Tuesday. Earlier this month, Eni said that it had...
ENERGY INDUSTRY・1 DAY AGO
MarketWatch

JPMorgan Chase Citigroup and Bank of America collected the most fees from the oil, gas and coal sectors in the past six years, according to a Bloomberg study released Monday. The news service said these and other major banks have drawn in at least $17 billion in fees and floated about $4 trillion in loans for fossil fuels since the Paris Agreement on climate was reached in 2015. So far in 2021, major banks helped generate $459 billion in bonds and loans for the oil, gas and coal businesses, according to Bloomberg data. The banks at the time time led $463 billion worth of green bonds and loans. The study comes ahead of the UN Climate Summit starting Oct. 31 in Glasgow.
ENERGY INDUSTRY・2 DAYS AGO
rigzone.com

The deal was approved at a meeting of the Rosneft Board of Directors. Rosneft has revealed that it has closed a deal to sell a five percent interest in the authorized capital of Vostok Oil LLC to a consortium of Vitol S.A. and Mercantile & Maritime Energy Pte. Ltd. The...
ENERGY INDUSTRY・7 DAYS AGO
bizjournals

Blackstone Inc. is buying a majority stake in Spanx Inc. in a deal that values the shapewear company at $1.2 billion, the Wall Street Journal reported after founder Sara Blakely worked with an all-women team of lawyers and brokers to negotiate the deal. Blakely will maintain a stake in the...
BUSINESS・7 DAYS AGO
chatsports.com

Wolves are lining up a lucrative pre-season tour of the United States after the club’s owners Fosun sold a minority stake to private equity firm PEAK6. PEAK6, a finance and technology group based in Chicago, once controlled a 25 per cent share in Bournemouth but this holding is thought to be considerably less than that, and relates to Wolves’ parent company Fosun Sports rather than the football club alone.
SOCCER・7 DAYS AGO
Reuters

HONG KONG, Oct 19 (Reuters) - China Evergrande Group’s deal to sell a 51% stake in its property services unit has been put on hold, two people with knowledge of the matter said, in a blow to the embattled developer’s hopes of avoiding a potentially disruptive default. Evergrande, teetering on...
WORLD・8 DAYS AGO
pymnts

Delivery Hero is backing on-demand grocery delivery platform Gorillas with a $235 million investment for an 8 percent stake in the company, leading the startup’s Series C funding round. Niklas Östberg, Delivery Hero CEO and co-founder, said in a blog post on Tuesday (Oct. 19) that the investment in Gorillas...
BUSINESS・8 DAYS AGO
High Point Enterprise

Hewlett Packard Enterprise brings good news for Eni by upgrading its existing supercomputer system, HPC4, which doubles storage capacity, increases sustainability to accelerate discovery of new energy sources with advanced modeling and simulation capabilities, while reducing operational costs and energy consumption. As the supercomputer is delivered as a service through the HPE GreenLake platform, it combines simplicity and agility with the governance, visibility and compliance of an on-premises environment.
ENERGY INDUSTRY・8 DAYS AGO
Markets Insider

Evergrande's deal to sell a majority stake in its property services unit to smaller rival has been put on hold, report says

Evergrande was in talks to sell 51% of its property services unit to Hopson Development Holdings for around $2.6 billion, Reuters reported.
ECONOMY・8 DAYS AGO