What Is Kenan Thompson’s Net Worth? 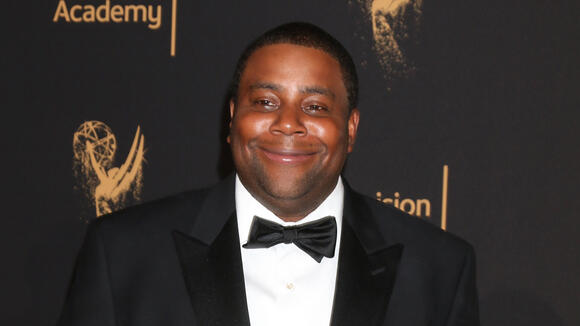 NBC has confirmed a second season for “Kenan,” which premiered in February earlier this year, according to Variety. “Saturday Night Live” comedian Kenan Thompson stars in the sitcom as an Atlanta morning show host/widowed father of two daughters.

Find Out: Just How Rich Are Jeff Bezos, Donald Trump and These Other Big Names? See: How Rich Are Tom Brady, Aaron Rodgers and 18 Other Past NFL MVPs?

“Kenan” is the latest work the actor has executive produced and starred in, alongside writers Jackie Clarke and David Caspe and executive producers Lorne Michaels, Ken Whittingham and Andrew Singer.

You can catch also catch Thompson on NBC’s “Saturday Night Live,” premiering its new season on Oct. 2.  This will be Thompson’s 19th season with the show; he is the longest-running cast member on the sketch show.

Take a Look: How Rich Are Megan Rapinoe, Alex Morgan and These Big-Name US Soccer Stars?

The veteran comedian makes on average $25,000 per episode on “SNL,” according to Celebrity Net Worth.

During the star’s extensive career on “SNL,” he has been nominated five times and won one Emmy in 2018 for outstanding original music and lyrics for a song featured on “Saturday Night Live” with host Chance the Rapper titled “Come Back, Barack.”

Fin d Out: 65 Splurges of the Filthy Rich
Check Out: The Richest Celebrity From Every State

The 43-year-old has been “all that” among the comedy scene since the ’90s, when he got started with Nickelodeon.

Born May 10, 1978, in Atlanta, Thompson began acting at the age of 5 and performed in local plays and church theater productions, according to Looper.

The comedian and producer got his first notable role as one of the original cast members on the Nickelodeon sketch comedy series “All That,” which was on air from 1994 to 2005.

He was only 16 when the first episode aired.

He and Kel Mitchell were featured in many notable skits on the show, solidifying themselves as a comedic duo, before going on to make their own show, “Kenan and Kel,” from 1996 to 2000.

Find Out: Former Celebrities Who Have Normal Jobs Now

Thompson served as executive producer of the “All That” revival series in 2019 and 2020, alongside original creator Brian Robbins and co-star Kel Mitchell.

In 2015, Thompson signed on to become the face of the movie ticketing company Fandango as a part of its “We Love Movies” marketing campaign, featuring 20 appearances.

Building Wealth: 30 Celebrities Who Went From Rags to Riches

In 2017, Thompson launched an unsuccessful Kickstarter campaign for his apparel brand, Smile Parade, which only managed to raise $734 of the $25,000.

According to Vulture Magazine, the business idea was to create a clothing line that would feature cartoons created by Thompson’s highlighted younger artists that would be funded by fans pledging money.

The star currently has a weekly pop culture podcast titled “You Already Know,” which he co-hosts with friend Tani Marole.

This article originally appeared on GOBankingRates.com : What Is Kenan Thompson’s Net Worth?

How Much Kanye West Is Worth After Officially Changing His Name

The richest Black man in America might soon be the rapper formerly known as Kanye West, according to projected reports from Bloomberg, which foreshadow his upcoming earnings to be in the $6-7 billion...
MUSIC・1 DAY AGO
GOBankingRates

If you're struggling to make ends meet, it might have something to do with where you live. It can be tough to stretch even a big paycheck far enough to pay for necessities and have money left over for...
REAL ESTATE・23 HOURS AGO
GOBankingRates

Paul Stanley, best known as rhythm guitarist and co-lead vocalist along with Gene Simmons for the rock band Kiss, has a net worth of $200 million, Celebrity Net Worth reported. Rock Celebrities notes...
SMALL BUSINESS・1 DAY AGO
Rolling Stone

Kenan Thompson, Rami Malek and surprise cameo guest Daniel Craig were jockeying against one another for the coveted role as Prince in a Jordan Peele-directed horror film/biopic during one of the more memorable sketches from the third episode of SNL‘s new season. Thompson, Craig and Malek all played themselves, while Chris Redd took on the role as Peele with Punkie Johnson and Ego Nwodim playing casting directors. The skit began with Thompson and Malek being told to take part in a “Prince Off.” They played the opening riff of Prince’s hit “Kiss” while also simultaneously miming out ridiculous actions like getting “pelted...
CELEBRITIES・4 DAYS AGO

Kenan Thompson buys a car from home in Autotrader ad

That’s right, the latest in Autotrader’s “Finally, It’s Easy” campaign from 72andSunny New York are ads starring comedic actor and entertainer Kenan Thompson. In the new 15- and 30-second TV spots, Thompson talks to his home’s AI-enabled smart devices and appliances, casually discussing how easy it is to buy a car from home with Autotrader.
ENTERTAINMENT・5 DAYS AGO
HollywoodLife

‘SNL’ star Kenan Thompson admitted Kim Kardashian was a ‘great’ host & teased if he will return for more seasons after his 19th on the show. After 19 seasons on Saturday Night Live, Kenan Thompson knows talent when he sees it! The comedian shared his praise for last week’s host, Kim Kardashian, while speaking in an EXCLUSIVE interview with HollywoodLife.com on behalf of his new Autotrader partnership. “Kim was great,” Kenan told HL. “You know, she spent all the time we needed her to spend with us, and she couldn’t have been better.” The Good Burger icon added that he was wildly impressed with creator Lorne Michaels‘ “hustle” to get the KUWTK star on the show in the first place.
CELEBRITIES・6 DAYS AGO
Distractify

In an exclusive interview with Distractify, Kenan talked about his longstanding history on the show and dished on his dream road trip with his SNL castmates. Read on to learn more. Kenan hasn’t given any indication that he’s leaving SNL anytime soon. According to the Kenan star, he still has...
CELEBRITIES・3 DAYS AGO
Deadline

Kenan Thompson has been an iconic voice in the comedy world for decades. Now, on Nov. 10, the “Saturday Night Live” star is taking his talent to the big screen. Thompson plays a veterinarian in Paramount’s new CGI/live-action feature “Clifford the Big Red Dog.”. The role is a special one...
ANIMALS・8 HOURS AGO
TVShowsAce

On the Season 3 premiere of The Family Chantel, Chantel’s future salary was discussed by her husband, Pedro. Now that she has graduated and will be a nurse, he has high hopes for a lavish future. However, his wife has made a pretty penny in her own right aside from her new career. So, what is her estimated net worth and how did she earn it? TLC is to thank for this one.
TV & VIDEOS・6 DAYS AGO
talentrecap.com

Romance in the Ballroom: 8 Couples Who Met on ‘Dancing With the Stars’

There seems to be no shortage of romance on set of Dancing with the Stars. Through the years, there have been a number of romantic interactions in the ballroom. In this list, you’ll find 8 memorable couples who have partnered up both on and off the stage. 1. Nikki Bella...
THEATER & DANCE・10 DAYS AGO
GoldDerby

“Dancing with the Stars” has a (limited) studio audience again for Season 30, and if there’s one thing you can count on the fans for, it is the unnecessary booing of constructive, fair critiques from the judges that are actually helpful for the celebrity. After JoJo Siwa and Jenna Johnson‘s peppy cha-cha on Monday, Derek Hough advised her to learn to harness her energy in her routines. “I think with you, more is more, right? But sometimes, especially on the side by side, more isn’t more. You’ve got to contain that energy a little bit. It can get a little bit...
THEATER & DANCE・22 DAYS AGO

The former member of Destiny's Child and the 'Empire State of Mind' hitmaker come across each other when they attend 'The Harder They Fall' premiere in Los Angeles. AceShowbiz - Kelly Rowland was left baffled after her recent interaction with Jay-Z at "The Harder They Fall" premiere went viral. When addressing the matter, the former Destiny's Child member admitted that she will "never understand" what's the big deal about it.
CELEBRITIES・1 DAY AGO
AOL Corp

Meg Ryan hasn't been on a red carpet for nearly two years, but it doesn't mean she forgot how to work one. The When Harry Met Sally... actress, 59, lit up the red carpet at Saturday's Academy Museum of Motion Pictures long-awaited opening gala in Los Angeles. She wore a long black and pink gown by Ulyana Sergeenko for the step-and-repeat in front of photographers. She also wore black, open-toe platform heels and styled her signature sun-kissed, wavy blond locks down.
LOS ANGELES, CA・24 DAYS AGO
Hello Magazine

Wow! George Stephanopolous has just announced some major news about his future and he's got the backing of his longtime wife, Ali Wentworth. The Good Morning America host is launching his own production company with ABC News and Ali shared the exciting move on Instagram. She proudly shared the exclusive...
CELEBRITIES・7 DAYS AGO
hotnewhiphop.com

Scott Disick is "going crazy" after Travis Barker and Kourtney Kardashian's engagement, over the weekend, according to a report from the New York Post. Disick and Kardashian share three children and had an on and off again relationship from 2005 to 2015. “Scott is going crazy,” one insider told the...
CELEBRITIES・2 DAYS AGO
Black Enterprise

Comedian, Actor, Ricarlo Flanagan Dies From Covid-19 After Implying Kyrie Irving Should Get The Vaccine

Stand-up comedian and actor Ricarlo Flanagan died from COVID-19 complications last week at 40, his reps confirmed. “Sadly this pandemic has taken the life of an extremely talented performer and even nicer human being,” a representative told Variety. “Ricarlo will be greatly missed.”. Flanagan’s passing came a few weeks after...
BROOKLYN, NY・1 DAY AGO
MLive

A reality television star has died as a result of a stabbing incident over the weekend in California, according to a news report. TMZ is reporting that Chris Pearson, 25, who was a contestant on MTV’s “Ex on the Beach,” was stabbed during an altercation around 2 a.m. Sunday and was transported to a hospital, but died around 3:30 a.m. from his injuries.
CELEBRITIES・9 DAYS AGO
TVShowsAce

Talk show host Wendy Williams is furious with her show’s producers. This is because of who they selected to fill in for her. Williams is not happy and she is letting everyone know it. It seems that the talk show host, who has been forced to sit out this season of The Wendy Williams Show due to illness does not approve of TV actress Leah Remini taking over her seat.
CELEBRITIES・2 DAYS AGO