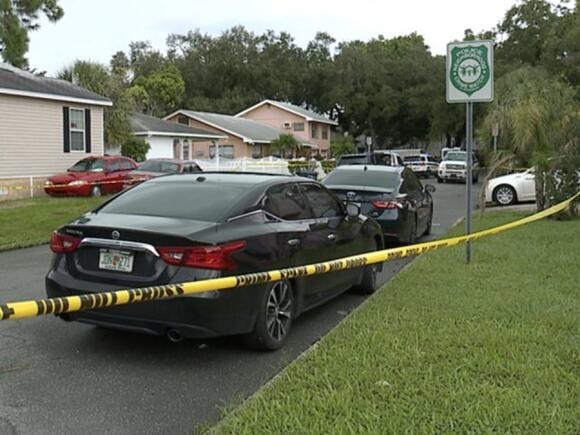 The St. Petersburg Police Department is tracking 26 homicides so far in 2021, that's higher than the average of around 20 per year. On Thursday, two people were shot and killed at a home on Granville Court South.

According to police, the suspect is 29-year-old James Pagan. Detectives believe Pagan knows at least one of the victims and left after the shooting but was arrested hours later in Alachua County on unrelated charges.

"St. Petersburg detectives are in the process of filing the necessary paperwork to file charges against Pagan in the shooting deaths of Barbarajean Lombardi and Tommy Dixon," St. Petersburg PD said in a press release. "It is early in the investigation, but Detectives believe the homicides were domestic-related."

It comes as several St. Petersburg families join in a mission to stop the violence.

Ebony Williams Dixon, whose stepson was killed in Thursday night's shooting, said it took all her might not to collapse at the crime scene. She's helped raise Tommy Dixon since he was just 18 months old.

"We love him and we just don’t understand how we got here,” she said fighting back tears.“Overall he was a good kid. He worked. He was on his way back to school. Just signed back up this week."

Dixon said Tommy was an avid drummer and someone who steered clear of trouble.

Just a few blocks away, Maress Scott knows that pain. Two years ago, his son Marquis was shot and killed riding his bicycle and Maress has worked every day since to get young adults to put down their guns.

The numbers are alarming. St. Pete averages around 20 homicides a year. This year, 26 people have been killed, with three months left in the year.

Here's how the numbers stack up:

Marquis Scott’s family started a nonprofit “Quis for Life” in his honor. They’ve encouraged hundreds of people to sign a pledge to choose a crime-free lifestyle and soon Maress will be going into schools to talk about avoiding crime with kids and young adults.

“Kids should be standing up and saying 'Hey I want to adopt a non-violent lifestyle because I want to live because I don’t want to see my mom crying the rest of her life from losing me,'” Maress Scott added.

What is going on in Saint Petersburg? It's all the time people killing each other..... Do these families pay attention to kids and relative's.

A Tampa Police officer was involved in a crash. The accident happened at Martin Luther King Blvd and North 29th Street in Tampa at around 1:30 p.m.
TAMPA, FL・16 HOURS AGO
ABC Action News WFTS

After nearly a month long search for Brian Laundrie, the FBI announced it located human remains inside the Myakkahatchee Creek Environmental Park in North Port.
NORTH PORT, FL・1 DAY AGO

A Polk Deputy is in the hospital after a two-vehicle crash in Auburndale.
AUBURNDALE, FL・1 DAY AGO
ABC Action News WFTS

A Lakeland man is dead after a single-vehicle crash in which he was not wearing a seatbelt, according to deputies.
LAKELAND, FL・1 DAY AGO

An attorney says family members are hoping for more answers from law enforcement regarding the cause of death for Brian Laudrie, who was a person of interest in the death of girlfriend Gabby Petito.
PUBLIC SAFETY・2 DAYS AGO
ABC Action News WFTS

The Manatee County Sheriff's Office is asking for citizens to be on the lookout for a 24-year-old woman reported missing and endangered in Bradenton.
BRADENTON, FL・3 DAYS AGO
ABC Action News WFTS

UPDATE — Authorities said Thursday morning that Alexa Henning has been found and is safe.
MANATEE COUNTY, FL・3 DAYS AGO

After a mother is allegedly murdered by her own husband, two women step up to help the domestic violence victim's family get the justice they deserve.
PUBLIC SAFETY・2 DAYS AGO
ABC Action News WFTS

CCR works to improve protection for victims of domestic violence

While preventing domestic violence is always the goal, it isn’t always realistic, which is why community partnerships to help perfect the response to these situations is all the more important.
HILLSBOROUGH COUNTY, FL・2 DAYS AGO
ABC Action News WFTS

Motorcyclist killed after crash with FHP cruiser, semi on I-4

A motorcyclist from Lakeland was killed in a crash on I-4 Monday night that involved an FHP Trooper and a semi, according to the Florida Highway Patrol.
LAKELAND, FL・5 DAYS AGO
ABC Action News WFTS

A house fire in Sulphur Springs was started by a child, according to the fire investigator.
TAMPA, FL・7 DAYS AGO
ABC Action News WFTS