By Chelsea Ritschel
The Independent
29 days ago 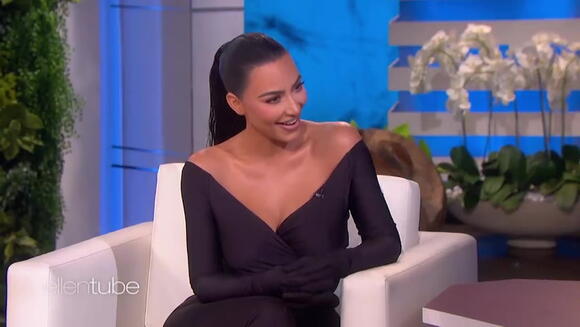 On Thursday, the Keeping Up With The Kardashians star sat down for an interview with DeGeneres on The Ellen Show, during which they discussed the Skims founder’s four children, who she shares with estranged husband Kanye West, and how they are “so different”.

When the conversation turned to Kardashian’s youngest child, Psalm, DeGeneres identified him as the one who was pictured on the reality star’s Instagram wearing a thick gold chain around his neck.

“And Psalm is the one that was wearing the giant chain around his neck? Is that Psalm?” DeGeneres asked as a photo of the two-year-old wearing the heavy linked chain appeared on screen. “Oh my god, he wears this fake giant chain…”

The comment prompted Kardashian to interject, with the mother-of-four replying: “Wait, did you say fake?” to laughter from the crowd and DeGeneres.

At first, DeGeneres appeared not to know whether Kardashian was kidding, with the talk-show host looking confused before stating: “It’s fake,” to which the KKW Beauty founder insisted: “It’s not!”

“It’s not?!” DeGeneres continued, prompting Kardashian to again confirm that the gold chain worn by her youngest child was indeed real, to which the talk-show host responded: “Oh my god, it’s huge!”

The host then asked a laughing Kardashian how the two-year-old can “keep his head up” while wearing the heavy chain, which she compared to a “wrestler’s belt”.

“It’s not fake?” DeGeneres asked a final time, with Kardashian appearing amused as she responded: “It’s not.”

The exchange, which ended with the talk-show host explaining that she had “just assumed” the necklace was fake because the chain was “so huge,” concluded with Kardashian adding: “Yeah, no.”

The interaction has since gone viral on social media, where viewers have expressed their amusement over Kardashian’s correction.

“I’m sorry but Kim K checking Ellen about Psalm’s chain is tickling me,” one person tweeted, while another clip of the video shared to Twitter, which has been viewed more than 1m times, was captioned: “It’s the way she corrected Ellen immediately for me.”

Others questioned why DeGeneres wouldn’t have assumed that the chain was real, as Kardashian and West are both billionaires, with someone else tweeting: “Did Ellen really think the child of Kim Kardashian and Kanye West would be wearing a fake chain?”

Elsewhere in the interview, Kardashian revealed other amusing details about her children, including that her and West’s daughter North still wants to be an only child, despite having three younger siblings.

“North, I thought she was gonna grow out of this like: ‘I want to be an only child’ phase,” Kardashian revealed. “She hasn’t. It’s a struggle even to go to school. There’ll be times when she’s like, ‘I’m not riding in the car with my brother.’

“So morning drop-off has to be a fun thing, and luckily, so many of our friends and cousins, they all live in the same neighbourhood, so I’m the carpool mom.”

Who the heck cares ! there's children going hungry and this plastic people talking about a child wearing a fake gold chain ! SO VAIN !

the problem is, it should be fake....it doesn't matter how wealthy someone is, no two year old needs a gold chain

600 dollars ?🤣🤣🤣🤣🤣🤣🤣🤣🤣🤣I have no idea if its ho.lpw but if its so.id it is 20,000. Hasnt she learned her lesson when she was bragging and showing her 5 million dollar ring in Paris and got robbed. I hope the child has more than one body guard . When Ellen said fake she should have left that go. I like her but she was too vain to let that slide when Ellen said fake.

Watch: Kim Kardashian Shares First Close-Up Photo of Psalm West. Psalm West proved nothing gets in the way of his TV time—even mom Kim Kardashian!. The KKW Beauty mogul, who shares four kids with ex Kanye West, recently let fans in on what quality time with the toddler is really like. In an adorable video posted to her Instagram Story on Sept. 27, Kim attempted to shower Psalm with enough kisses for a lifetime. However, the 2-year-old was quite preoccupied with other things, including watching his favorite show on TV.
CELEBRITIES・18 DAYS AGO
iHeartRadio

Kim Kardashian is a proud mom of four. The KUWTK star likes nothing better than dishing on her children and their accomplishments. Kardashian shares four children, North, 8, Saint, 5, Chicago, 3, and Psalm, 2, with ex-husband rapper Kanye West. Kim believes in allowing her children to express themselves at all times freely.
CELEBRITIES・28 DAYS AGO
CinemaBlend

Kim Kardashian Is Being Sued By Neighbor For Alleged Underground Vault, But What's Really Going On?

The Kardashian-Jenners keep their fans well-informed of their lavish lifestyle via social media. They even make it absolutely, perfectly clear that their toddler’s gold chains are, like, totally real. But can't the Kardashians have their cake and build under the foundations of their mansions, too? A neighbor of Kim Kardashian’s is reportedly suing her over an alleged underground vault, but there's supposedly more to the story.
CELEBRITIES・27 DAYS AGO

This cute little bag comes with a hefty price tag. Kim Kardashian's friend and former assistant, Stephanie Shepherd, rang in her 32nd birthday last week and got one lavish gift, courtesy of the Keeping Up With the Kardashians star. In a video later shared to her Instagram Stories on Sept. 19, Stephanie got emotional as she unwrapped an Hermès Kelly bag.
CELEBRITIES・25 DAYS AGO
E! News

Watch: Khloe Kardashian Goes Back to Blonde in Stunning New Look. Going through reality TV withdrawal. Khloe Kardashian may have enjoyed getting a break from being on-camera after Keeping Up With the Kardashians wrapped, but momager Kris Jenner was eager to start working on the Kardashian-Jenner's new Hulu series. "Since...
CELEBRITIES・18 DAYS AGO
In Style

When it was first revealed that Kim Kardashian would be hosting Saturday Night Live for the first time, people were skeptical if she could pull it off. After all, Kim is known for a lot of things, but funny is not one of them. But to most everyone's surprise, Kim killed it once she stepped out on stage. Her jokes didn't fall flat, they were actually funny, and she didn't hold back, taking shots at herself, her famous family, and even her estranged husband, Kanye West.
CELEBRITIES・6 DAYS AGO
OK! Magazine

Shots fired. Kim Kardashian revealed that her first-born daughter has a special way of getting under her skin. During an appearance on Ellen's Mom Confessions, Kardashian explained that her 8-year-old, North West — whom she shares with estranged ex Kanye West — reportedly tries to rattle her mom by insulting her home design.
RELATIONSHIPS・4 DAYS AGO

Leah Remini guested on Ellen DeGeneres' popular talk show Tuesday and called out the host for her responses, accusing her of "acting interested" before hitting her. During her appearance on "The Ellen DeGeneres Show," the "King of Queens" alum got into the Halloween spirit by quipping the 63-year-old host that "it's normal for a parent to scare the crap out of their kids."
CELEBRITIES・11 DAYS AGO
People

Rob Kardashian joined sisters Kim, Kourtney and Khloe at an outdoor dinner Monday. The Kardashian clan united for dinner on Monday, and Rob Kardashian made a rare appearance!. On Instagram, Kim Kardashian shared a photo of Rob in a white t-shirt and a black ballcap, with his arm wrapped around big sister Khloé Kardashian.
CELEBRITIES・11 DAYS AGO
Popculture

Travis Barker's rocker style is rubbing off on Kourtney Kardashian's 9-year-old daughter! The Keeping Up With the Kardashians alum took to Instagram Sunday to share photos of Penelope rocking an all-black look with smoky eye makeup and long black wig. Kardashian captioned the attitude-filled shots with a spider, bat and black heart emoji, and her beau made sure to show his approval in the comments.
CELEBRITIES・12 DAYS AGO
TVShowsAce

Kim Kardashian, Kanye West Spotted Getting Expensive Dinner Out Together

They say that kids instinctively rebel against their parents. Presumably young North West has heard her father Kanye’s recent Donda album, because her mother Kim Kardashian-West has revealed that the eight-year-old is all about Black Sabbath. “North is like goth. She’s into Hot Topic,” Kim told Ellen DeGeneres. ​“She puts...
CELEBRITIES・29 DAYS AGO
shefinds

Khloe Kardashian’s beauty transformation has been well documented across the internet, and the reality star and ‘Good American’ owner only continues to evolve as she posted an ad video to Instagram looking different than usual early this week. The new look comes after it was alleged that Kardashian was not in attendance at the Met Gala for reportedly being “too C-list,” although many of her family members were there.
CELEBRITIES・14 DAYS AGO
Cosmopolitan

Earlier this month, the glitz and glamour of the Met Gala returned after two very long years. As always, the stars turned out in full force, from Billie Eilish's stunning Marilyn Monroe-inspired gown, to Kim Kardashian's all-black ensemble. But one Kardashian-Jenner who was noticeably missing from the event was Khloe. Given that she's never joined her sisters, Kim, Kendall and Kylie on the steps of the Met, fans once again started speculating whether she's actually banned from fashion's most famous event.
BEAUTY & FASHION・16 DAYS AGO
HollywoodLife

Khloé Kardashian explained that her daughter True believes that her cousins are all actually her siblings in an adorable interview. Some cousins can be as close as siblings! Khloé Kardashian, 37, revealed that her daughter True Thompson, 3, believes that her cousins Psalm West, 2, Chicago West, 3, and Dream Kardashian, 4, are really her siblings in a Monday September 20 interview with E! News. The Keeping Up With The Kardashians star sounded incredibly happy and in awe of how sweet it is that her little girl is so close with her cousins.
CELEBRITIES・26 DAYS AGO
talentrecap.com

Kim Kardashian Was on ‘Dancing with The Stars’?

One of the most influential A-listers today was once featured on Dancing with the Stars. Back in 2008, Kim Kardashian was best known for her newfound fame on Keeping Up with the Kardashians. The then-rising reality star lasted three rounds on the series before facing elimination. Fans are well-aware today...
THEATER & DANCE・28 DAYS AGO
enstarz.com

Ellen DeGeneres has decided to finally end her hit show "The Ellen DeGeneres Show" after 19 seasons which started in 2003. The 63-year-old wants to exit daytime TV with a bang. However, it's not going to be possible if the A-list stars she wishes to make a guest on her show don't want to participate.
CELEBRITIES・26 DAYS AGO
TVShowsAce

Scott Disick and Kourtney Kardashian‘s kids, Mason, Penelope, and Reign, are spending some quality time with their dad these days. Scott and kids were caught by photographers enjoying some of the best Las Vegas kid-friendly hot spots over the weekend. The happy little family was spotted doing some shopping at...
CELEBRITIES・27 DAYS AGO
E! News