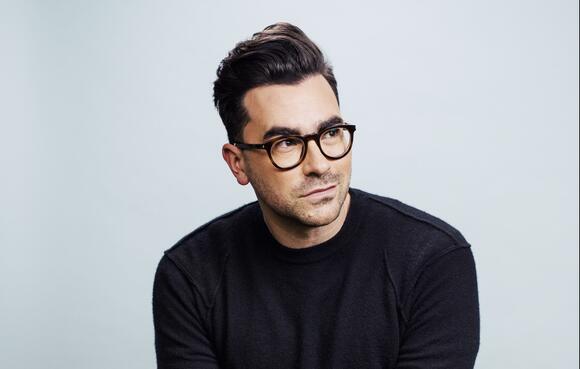 A year after winning four Primetime Emmys for the hit comedy series Schitt’s Creek, Dan Levy has closed a first look feature deal and an overall one in scripted content with Netflix , under which he’ll write and produce.

Levy’s work in film will begin promptly with an original untitled romantic comedy which he’ll direct, write, produce and star in. Sister’s Stacey Snider and Kate Fenske will also produce alongside Levy. The multi-hyphenate’s work in series will start in July 2022 when his current three-year overall deal with ABC Signature ends.

“Netflix offered Schitt’s Creek a second home at just the right time and opened the doors to a whole new audience for us,” said Levy, “Watching the show thrive there has only enhanced my excitement about continuing to tell specific, meaningful stories with them in both tv and feature film. A full circle moment.”

Added Scott Stuber, Head of Global Film and Bela Bajaria, Head of Global Series, “Dan Levy is an incredible all-around creative talent, who thoughtfully approaches every story with a meaningful perspective. His work on Schitt’s Creek charmed audiences around the world and we’re thrilled to partner and create new films and shows with Dan.”

Until his Netflix TV deal starts in July 2022, Levy will continue to be exclusive to ABC Signature where he currently has three live-action projects in the works as well as animated comedy Standing By which has a presentation order at Hulu.

Levy starred in the Tri-Star Kristen Stewart romantic comedy movie The Happiest Season which debuted over Hulu last Thanksgiving, becoming one of the streamer’s most watched original movies.

Levy is repped by WME, MGMT Entertainment, and Morris Yorn.

It takes a thief, as the saying goes, to catch a thief, and the maxim is put on display in the new trailer for Red Notice, the upcoming Netflix film starring Dwayne Johnson, Gal Gadot and Ryan Reynolds. Written and directed by Rawson Marshall Thurber, Red Notice – the title refers to the global alert issued by Interpol – is a heist comedy in which an FBI profiler (Johnson) partners with the world’s greatest art thief (Reynolds) to catch the world’s most wanted art thief (Gadot). As Netflix describes, “The high-flying adventure that ensues takes the trio around the world, across the...
MOVIES・1 DAY AGO
Deadline

EXCLUSIVE: Byron Allen’s Entertainment Studios Motion Pictures has acquired U.S. rights to For the Love of Money, a crime drama directed by Leslie Small that stars Keri Hilson and Katt Williams. The distributor plans to release the pic via its Freestyle Releasing, in association with Global View Entertainment, in 750 theaters nationwide on November 24, marking the company’s first theatrical release in more than a year owing to the pandemic. The pic, produced by Melvin Childs Presents, centers on a single mother (Hilson) who, when pushed to her limits out of the need to protect her daughter (Jazzy Jade), returns to...
MOVIES・1 DAY AGO
Deadline

EXCLUSIVE: David Heyman’s Heyday Television has optioned four novels from award-winning Spanish noir author Dolores Redondo: The North Face of the Heart and its Baztan Trilogy prequel, the latter of which has already been made into three Netflix films. The North Face Of The Heart follows Spanish detective Amala Salazar, as she helps the FBI track an extraordinary serial killer down in New Orleans on the eve of Hurricane Katrina. Salazar joins a high-profile team led by FBI agent Aloisius Dupree, whose own complicated past is entwined with the communities struggling to defend their homes as the flood waters rise. Prior to its publication, Redondo wrote the Baztan Trilogy, which comprises The Invisible Guardian, The Legacy of the Bones and Offering to the Storm and has already been made into three Spanish language Netflix films by Fernando González Molina. Harry Potter’s Heyman and Heyday president Tom Winchester will oversee the projects. Heyday, which is part of NBCUniversal International Studios, has been busy in the optioning market since it launched, most recently scoring TV rights to Big Little Lies’ author Liane Moriarty’s Apples Never Fall.  Redondo is represented by CAA and Anna Soler-Pont at the Pontas Agency.
NEW ORLEANS, LA・2 DAYS AGO
Variety

As the Netflix walkout in response to the company’s continued support of Dave Chappelle’s special “The Closer” is underway at the streamer’s Los Angeles headquarters, a new video that includes activists and Netflix talent alike has been released. “Stand Up in Solidarity With Team Trans* at Netflix!” includes appearances by Ashlee Marie Preston, Jonathan Van Ness, Angelica Ross, Jameela Jamil, Mason Alexander Park, Kate Bornstein, Our Lady J, Sara Ramirez, Peppermint and Colton Haynes. Watch the video below: Elliot Page, star of Netflix’s “The Umbrella Academy,” also shared the video on Twitter, writing, “I stand with the trans, nonbinary, and BIPOC employees...
TV & VIDEOS・2 DAYS AGO

The “John Wick” prequel series at Starz, “The Continental,” is rounding out its main cast with five new additions. Mishel Prada (“Vida”) will play KD; Hubert Point Du-Jour (“Blindspot,” “Madame Secretary”) will play Miles; Jessica Allain (“The Laundromat,” “Thriller”) has been cast as Lou; Nhung Kate (“Swapping Fate,” “The Better Man”) has been cast as Yen; and Ben Robson (“Animal Kingdom,” “Vikings”) has been cast as Frankie. The five join previously announced series lead Colin Woodell as well as cast member Mel Gibson. “The Continental” will explore the origin behind the titular hotel-for-assassins through the eyes and actions of Winston Scott (Woodell), who...
TV & VIDEOS・3 DAYS AGO
GoldDerby

New on Netflix for November 2021

November 2021 already looks like the biggest month of the year for Netflix. The streaming platform will debut a number of new movies and television shows, including highly-anticipated awards contenders like “The Harder They Fall,” “Passing,” “tick, tick… BOOM!” and “Bruised,” plus the blockbuster “Red Notice” with Gal Gadot, Ryan Reynolds, and Dwayne Johnson. Beyond those original movies, Netflix is also set to premiere a handful of highly anticipated series, such as “Cowboy Bebop” with John Chu, “True Story” with Kevin Hart and Wesley Snipes, and a new season of “Big Mouth.” If reality television is what you want, the...
TV & VIDEOS・2 DAYS AGO
NME

Netflix is releasing 23 Christmas films and TV shows in November

Netflix has released its festive programme made up of 23 films and TV shows that will be launched in the run up to Christmas day. The festivities will kick off from November 1 with The Claus Movie, a family film about an ailing grandfather’s mission to save Christmas with his holiday-hating granddaughter.
TV SHOWS・14 DAYS AGO
hypebeast.com

French actor and Lupin star Omar Sy has inked a multi-year feature film deal with Netflix, which enlists Sy’s Paris and L.A.-based production company Korokoro to produce original projects for the streaming service. The new endeavor, which is Netflix’s first deal with a French filmmaker, will see Sy as both...
MOVIES・10 DAYS AGO

Shrinking is coming to Apple TV+. The streaming service has ordered the new comedy series that will star Jason Segel (How I Met Your Mother). He’ll play a psychiatrist who breaks all the rules and tell his patients exactly what he thinks. Ten episodes have been ordered for the series.
TV SERIES・8 DAYS AGO
imdb.com

Rom-coms have been popular since the '30s and '40s, when classics like "It Happened One Night," "His Girl Friday," "The Philadelphia Story," "Bringing Up Baby," and "Some Like It Hot" courted moviegoers. It wasn't uncommon for these uproarious films to receive rave reviews from both critics and viewers, and they continued to permeate as Hollywood moved into the '50s and beyond.
MOVIES・8 DAYS AGO
/Film

Omar Sy, who plays the titular master thief in Netflix's popular heist series "Lupin," will be involved in several new features at the streaming platform. The French actor has signed a multi-year film deal with Netflix, where his Paris and Los Angeles-based production company will develop original films for the streamer. Sy will also star in these new projects and serve as an executive producer.
MOVIES・10 DAYS AGO
First Showing

"Yeah, she still got somethin'." Netflix has unveiled a trailer for Bruised, a thrilling new sports drama that is also the directorial debut of actress Halle Berry. This is opening on Netflix in November, despite not showing up at any festivals or elsewhere yet. A disgraced MMA fighter finds redemption in the cage and the courage to face her demons when the son she had given up as an infant unexpectedly reenters her life. She left the sport on bad conditions years earlier, but is given a chance to start a new life back in the octagon. Halle Berry also stars as Jackie Justice, with a cast including Adriane Lenox, Sheila Atim, Valentina Shevchenko, and Stephen McKinley Henderson. It's a "triumphant story of a fighter who reclaims her power, in and out of the ring, when everyone has counted her out." This looks pretty dang good, though it seems to be the same underdog-returns-the-ring story we've seen in plenty of boxing/fighter movies before.
TV & VIDEOS・8 DAYS AGO

Ew, David! More like: Yay, David! PCMA announced that Dan Levy, who played David Rose on the beloved Emmy Award-winning comedy Schitt’s Creek (he also co-created the show with his father, Eugene Levy), will take the stage at Convening Leaders 2022. Along with acting, Levy, an Emmy Award winner himself,...
CELEBRITIES・8 DAYS AGO
Cleveland Jewish News

Netflix co-CEO Ted Sarandos said the streaming service will not remove Dave Chappelle’s new comedy special “The Closer,” which has faced a backlash for featuring controversial comments, including an antisemitic joke. After “The Closer” premiered last week, Chappelle was criticized by the LGBTQ+ community for poking fun at trans people...
TV & VIDEOS・9 DAYS AGO
heraldsun.com

Strike dodged with deal between film and TV crews, studios

LOS ANGELES (AP) — An 11th-hour deal was reached Saturday, averting a strike of film and television crews that would have seen some 60,000 behind-the-scenes workers walk off their jobs and would have frozen productions in Hollywood and across the U.S. What You Need To Know. The union representing most...
TV SHOWS・5 DAYS AGO
Variety

Variety's Awards Circuit is home to the official predictions for the upcoming Oscars and Emmys ceremonies from film awards editor Clayton Davis. Following history, buzz, news, reviews and sources, the Oscar and Emmy predictions are updated regularly with the current year's list of contenders in all categories. Variety's Awards Circuit Prediction schedule consists of four phases, running all year long: Draft, Pre-Season, Regular Season and Post Season. The eligibility calendar and dates of awards will determine how long each phase lasts and is subject to change. To see all the latest predictions, of all the categories, in one place, visit THE...
CELEBRITIES・1 DAY AGO
UPI News

Oct. 20 (UPI) -- Elliot Page, Lilly Wachowski and Joey Soloway were among the celebrities supporting Netflix employees and creators in a walkout on Wednesday. Trans employees organized the walkout over Dave Chappelle's latest comedy special, The Closer. Page stars on Netflix's series The Umbrella Academy. He tweeted, "I stand...
CELEBRITIES・2 DAYS AGO
Variety

Emily Blunt is in talks to star in Universal’s “Oppenheimer,” an upcoming World War II movie from director Christopher Nolan. Though nothing is official, the casting would reunite Blunt with her “A Quiet Place Part II” co-star Cillian Murphy, who will portray the title role of J. Robert Oppenheimer in the film about the development of the atomic bomb. Blunt is expected to play the wife of Oppenheimer, the American physicist who was pivotal in the Manhattan Project. Universal Pictures and reps for Blunt didn’t respond to request for comment. Murphy and Nolan have worked together on several films, including “Batman Begins,” “Inception” and...
MOVIES・2 DAYS AGO