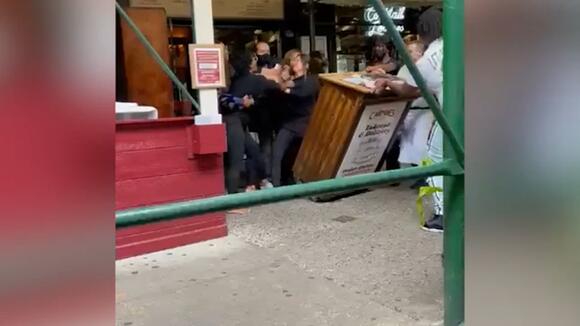 New video shows the hostess of a Manhattan restaurant allegedly being assaulted after asking three tourists to show proof of vaccination to eat inside, as mandated by the city. It happened at Carmine's Restaurant at 2450 Broadway on the Upper West Side around 5 p.m. Thursday, on day three of enforcement of city's vaccine mandates. City inspectors had just commended Carmine's for their enforcement of the policy, but hours later, the hostess was allegedly attacked by three women from Houston who didn't want to eat outside. The cell phone video shows the chaos outside the eatery, and you can hear screaming as the women lunge at her and other members of the group and staff jump in to drag them away. WATCH FULL VIDEO:

A hostess was assaulted at Carmine's on the Upper West Side, allegedly by three women who didn't want to show proof of vaccination

"She was very intimidated, crying, all that," Carmine's Chef Alejandro Delgado said. The 22-year-old victim, who had only been on the job three weeks, asked the women for vaccination proof and then ID cards to match the vaccine cards. TOP NEWS | Police body cam video shows Gabby Petito, boyfriend after 911 call

When she questioned the legitimacy of their vaccination cards, the out-of-town visitors got upset and lunged at her, punching her repeatedly and also injuring two other staff members. The women reportedly didn't want to show ID, which police say contributed to the belief they were not valid. "The last 18 months have been surreal for restaurant industry," Alicart Restaurant Group CEO and President Jeffrey Bank said. "Everyone has done everything they can to keep our employees and our guests safe, and this is just yet another day, another chapter of crap we have to go through on a daily basis." Manhattan Borough President Gale Brewer said such an incident is completely unacceptable. "Do not assault restaurant workers," she said. "They're trying to keep us safe. We're trying to keep them safe." The alleged assailants were identified as 49-year-old Sally Lewis, 44-year-old Kaeita Rankin, and her 21-year-old daughter Tyonnie Rankin. They were all taken into police custody and charged with assault and criminal mischief. The hostess was taken to the hospital. The owner of Carmine's now joins other restaurants around the city in raising concerns about the enforcement of the vaccine mandate. ALSO READ | Missing 17th century masterpiece discovered in Westchester County church

MYSTERY SOLVED: A lost painting that is believed to date back to the 17th century was found in a New York church and now will be on display for all to see.

They've now hired private security to stand at the hostess booth for the weekend. "There needs to be rules and laws that are stricter," Bank said. "We can't just put a law on the books without enforcement. Whether it's my responsibility or not, fine, we'll do what we're told and what we're asked of. We always have the last 18 months. But there should be some teeth behind the mandate." The women were given desk appearance tickets, and Bank is now joining others in calling on the city to increase awareness of the new mandate with stricter fines for violators. "Assaulting a restaurant worker for doing their job is abhorrent and must be punished," said Andrew Rigie, executive director of the NYC Hospitality Alliance. "We're calling on the city and state of New York to immediately increase penalties for assaulting restaurant workers in New York City in conjunction with enforcement of COVID-19 protocols." ---------- * Get Eyewitness News Delivered * More Manhattan news * Send us a news tip * Download the abc7NY app for breaking news alerts * Follow us on YouTube

If you believe these restrictions are wrong, fight the right people. That hostess is just doing her job. What is wrong with people.

They should be sent to jail and after jail have to feed the homeless people for 6 months. Hope they all get fired also and have a nice record to boot of assault. Pay for damages and pay the persons that got hurt out of there own money . I hope she sues each one of the low life’s also .

Crime, and more crime - it is front and center on the campaign trail for the next mayor of New York City.
NEW YORK CITY, NY・13 HOURS AGO
ABCNY

A few dozen people were in the plaza outside the Barclays Center, some chanting "Let Kyrie play! Let Kyrie play!" and holding signs that said "Stand with Kyrie."
BROOKLYN, NY・18 HOURS AGO

The hugely popular Netflix show "Squid Games" has exposed more people to Korean television dramas, but of course there is so much more to that rich culture.
NEW YORK CITY, NY・4 HOURS AGO
ABCNY

Dogs had their day in Tompkins Square Park in the East Village ahead of Halloween.
NEW YORK CITY, NY・1 DAY AGO

A small plane attempting an emergency landing overshot a runway at a Hamptons airport and plowed into some shrubs on Saturday, but no injuries were reported, police said.
NEW YORK CITY, NY・1 DAY AGO
ABCNY

Two people were stabbed during a dispute that spanned more than half a dozen city blocks in Manhattan Sunday afternoon.
MANHATTAN, NY・19 HOURS AGO

The event took place outside Adlai Stevenson High School in the Soundview section of the Bronx.
NEW YORK CITY, NY・2 DAYS AGO
ABCNY

Hundreds walked together on Sunday in New Jersey to raise awareness for suicide prevention.
HOBOKEN, NJ・13 HOURS AGO
ABCNY

Voters headed to the polls Saturday for early voting in both New York City and for the first time ever, in New Jersey as well.
NEW YORK CITY, NY・1 DAY AGO
ABCNY

COVID News: Vaccines for children could be available in weeks, Fauci says

Dr. Anthony Fauci predicts that vaccines for children between 5 and 11 could become available within the first two weeks of November.
NEW YORK CITY, NY・40 MINUTES AGO

Bronx smoke shop workers fight back as man jumps over counter, tries to rob them

The suspect jumped over the counter of the shop in Claremont on Saturday night, then got pummeled by two workers.
BRONX, NY・13 HOURS AGO
ABCNY

The NYPD says they got a call about a person holding two kitchen knives and harassing elderly people at the intersection of Elizabeth and Grand streets at around 8:37 a.m.
NEW YORK CITY, NY・2 DAYS AGO
ABCNY

Tariq Haq opened his spot in Park Slope three years ago. It's the third restaurant he's owned and this time he pays tribute to his Indian heritage.
BROOKLYN, NY・2 DAYS AGO