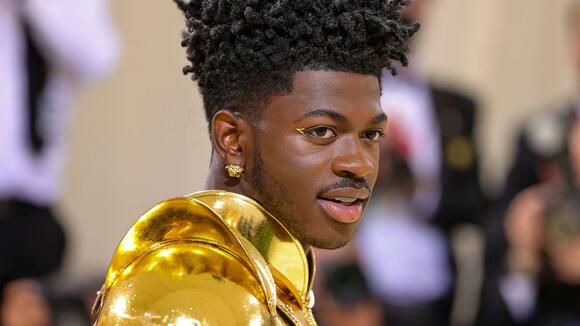 Released Friday at midnight, Lil Nas X also delighted fans by dropping the heartbreaking music video for the song "That's What I Want."

The single explores the 22-year-old Grammy winner's pains of the heart as he openly craves sharing his life and success with a significant other that loves and needs him just as much. Lil Nas X also confesses that he's garnered a reputation "for givin' love away," admitting it's a crutch to combat the loneliness that's consuming him.

MORE: Lil Nas X answers kids' questions about what it means to come out of the closet

The music video follows Lil Nas X loving and, eventually, losing the man he thought was going to be his forever, culminating with the rapper donning a wedding dress and walking down the aisle to accept a guitar given to him by Billy Porter.

"Montero" explores personal themes of self-hatred and struggling with self-acceptance, such as in the track "Sun Goes Down," with lyrics describing what it means to be happy or at peace with one's self.

MORE: Lil Nas X reveals why it was 'terrifying' for him to come out publicly

The album, which boasts an array of pop and hip hop crossover tracks, also features the song "Dead Right Now," which has Lil Nas X looking back at those who have doubted him when he took a leap of faith to drop out of college and pursue his dream of making music.

"Montero" is now available to purchase and stream everywhere.

Lil Nas X Says This Artist Is His ‘Biggest Inspiration’

Lil Nas X recently professed his love for Doja Cat. The “Say So” singer was a part of Nas X’s debut album, “Montero” and Nas said he really enjoyed working with her. “Doja cat has become my biggest inspiration. She puts so much effort into everything she does. and she’s hot. (sic)” Nas X tweeted.
CELEBRITIES・11 DAYS AGO
Variety

How Are the 2022 Grammys Shaping Up for Lil Nas X?

After a busy year that not only saw him release a blockbuster album but also redefine what it means to be an LGBTQ pop star — and appear on the cover of Variety — Lil Nas X is primed to be a top Grammy contender. The 22-year old rapper, already a six-time nominee and two-time winner, paved the way for his long-awaited debut album, “Montero,” with a wave of masterfully orchestrated viral moments. If there were a trophy for most savvy internet user, Nas would be a shoo-in. The album reveals the man behind the memes — opening up about self-acceptance,...
MUSIC・5 DAYS AGO
hotnewhiphop.com

Lil Nas X and director Christian Breslauer revealed several details about the making of Nas' "Industry Baby" music video, featuring Jack Harlow, in a new behind-the-scenes video. For starters, the video explains that the Grammys seen in the opening prison cell scene are Nas' actually trophies. Additionally, the poster on...
MUSIC・12 DAYS AGO
The Guardian

Adele has finally released a much-anticipated new single, Easy on Me – with a film clip that attracted more than half a million views within an hour of being uploaded to YouTube. After a six-year hiatus for the 15-time Grammy-winning singer, the song is the first track from her fourth...
MUSIC・11 DAYS AGO

Lil Nas X had a meteoric rise to fame when his breakout song “Old Town Road” went viral at the beginning of 2019. From there he released a debut mixtape, continued to release hit songs and dropped his debut album in 2021. Lil Nas X also came out in 2019, sparking debate in the music community about manhood and self-confidence.
MUSIC・11 DAYS AGO
edinazephyrus.com

The internet’s favorite rapper has finally put out his first album, “Montero,” after two singles and many social media teasers to build anticipation. Lil Nas X, at only 22 years old, has certainly established himself as a musician to be reckoned with. He initially became popular in 2019 with the viral song “Old Town Road,” breaking records as the longest-running #1 single at 17 weeks straight. He didn’t remain a one-hit-wonder, though—earlier this year, Nas dropped the lead single off his album “Montero (Call Me By Your Name)” along with a controversial music video that rapidly amassed millions of views. On Sept. 17, the highly-anticipated debut album “Montero” was released.
CELEBRITIES・8 DAYS AGO
Harvard Crimson

Since the 2019 release of his record-smashing debut track “Old Town Road,” Lil Nas X has cemented himself as a pop culture mainstay thanks to his bold red carpet looks, creative music videos, humorous personality, and more. However, his rise to fame has not been an easy one. Since coming out as gay around the release of his first EP, Lil Nas X has faced persistent backlash from those who take offense to a confident queer Black man exhibiting pride in his sexuality. Unfortunately, it seemed as though the fear of persecution that prevented Lil Nas X from coming out for so long was being realized in a truly upsetting manner. The time for Lil Nas X’s bold response was imminent. Enter “MONTERO,” Lil Nas X’s debut album of reclamation, released Sept. 17. After spending recent years dealing with homophobic attacks, Lil Nas X finally takes back all the power society has stripped from him, a mission that is evident in the album’s meaningful lyrics, inventive sonic composition, and overall aesthetic.
MUSIC・7 DAYS AGO
thatgrapejuice.net

Lil Nas X has done it again. For, the GRAMMY winner has earned his third #1 single. On the latest Hot 100 update by Billboard, Lil Nas X and Jack Harlow have claimed the #1 single in the country with their hit ‘Industry Baby.’. Over the last week, the song...
MUSIC・8 DAYS AGO

Lil Nas X‘s instantly controversial video for “Industry Baby” has gotten the VEVO Footnotes treatment: You can now watch the making-of feature, complete with behind-the-scenes information and commentary from both the rapper and the clip’s director. Here are just some of the things you can learn about the clip from...
CELEBRITIES・12 DAYS AGO
NME

Many students at San Luis Obispo High School tuned into the Met Gala this year on September 13, held in the Metropolitan Museum of Art in New York City. Although the event was much later in the year than past years, many can argue that the looks were just as extravagant.
SAN LUIS OBISPO, CA・4 DAYS AGO
dancingastronaut.com

Electric Daisy Carnival finally made its return to Las Vegas following numerous pandemic-related delays over the last year. While some things change, mainly swapping the summer swelter for an October run this year, others, thankfully never do. The usual swell of talent took over the Speedway for a blockbuster weekend of performances and special guest appearances, marking some of the most notable moments of the year, and while EDC’s comeback certainly held a special atmosphere with everyone finally back together again, the event was largely business as usual bringing a larger-than-life production to reality, jam-packed with highlights all weekend. One such high note was Diplo‘s cosmicMEADOW performance on Saturday night (October 23), when he invited Lil Nas X on stage to rekindle a live “Old Town Road” reunion.
CELEBRITIES・1 DAY AGO

Boosie Badazz says that he has "international love n respect" following the backlash to his homophobic rant directed towards Lil Nas X, over the weekend. Boosie had used several slurs and told the Montero rapper to commit suicide. After fans overwhelming backed Nas, Boosie responded to the backlash on Sunday.
CELEBRITIES・1 DAY AGO
hotnewhiphop.com

Lil Nas X Receives His Own Day In Atlanta: "This Is Incredible"

Love him or hate him, Lil Nas X continues to shine. The Pop-rapper has only been lavishing in the throws of celebrity for about two years but he has been catapulting to new heights from one announcement to the next. His debut studio album Montero proved to be a No. 1 charting hit, as was his "Industry Baby" single featuring Jack Harlow.
CELEBRITIES・5 DAYS AGO
thesource.com

The status quo on the songs chart has shifted, as Lil Nas X’s “Industry Baby” — a collab with Jack Harlow — finally reached No. 1 after spending a lot of its six-week run to date stuck in the No. 2 position. The tune moves up on the strength of 18.9 million streams.
MUSIC・8 DAYS AGO
GMA

He also dedicated a song to his mother at his Boston show.
CELEBRITIES・5 HOURS AGO
People

Having been introduced to HSN at an early age by mom Evelyn Braxton, Toni Braxton and her famous sisters are longtime fans of the shopping television network — "The whole Braxton crew watches," she tells PEOPLE exclusively. So when the R&B icon decided it was time to launch her first-ever fragrance, parterning with HSN was a no-brainer.
BEAUTY & FASHION・12 DAYS AGO
hotnewhiphop.com

On Wednesday, Snoop Dogg officially turned 50 years old, and one day later, it appears that the prolific West Coast legend still has plenty to celebrate. In a heartfelt post shared to Instagram, Snoop took a moment to honor his wife, high school sweetheart, and business partner: Shante Broadus. As...
CELEBRITIES・5 DAYS AGO