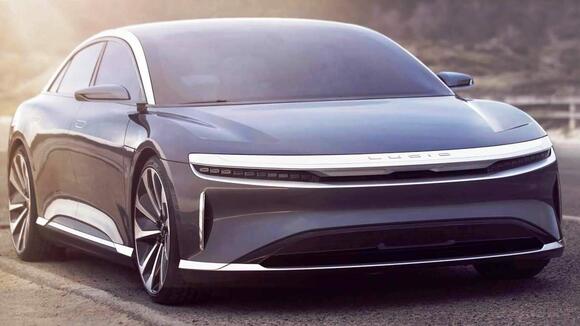 At one point Thursday, the major equity indexes traded down by nearly a point. By the end of the day, the indexes closed either with a small gain (Nasdaq Composite up 0.1%) or a small loss (Dow and S&P 500 down 0.2%). Premarket trading Friday was lower by about 0.2%.

IronNet Cybersecurity Inc. ( NYSE: IRNT ) had another big day Thursday, adding nearly 29% to its share price to close at $41.40, after posting a new 52-week high of $47.50. The company had posted a new high of $32.72 on Wednesday. IronNet had no specific news Thursday, but the run-up in the share price may be cooling off Friday. The stock was trading down by nearly 12% in Friday's premarket.

Electric vehicle maker Lucid Group Inc. ( NASDAQ: LCID ) saw a gain of 6.3% on Wednesday to close at $21.17. The company is among the dozen most talked about on the WallStreetBets subreddit over the past 24 hours, largely the result of comments from BofA Securities analysts who initiated coverage of the company with a Buy rating and price target of $30. Lucid's SPAC combination closed in late July , and the shares began trading at around $25, a level the stock has not seen since. Shares were up by nearly 5% in Friday's premarket.

SmileDirectClub Inc. ( NASDAQ: SDC ) was the most talked-about stock on social media Thursday. The stock has added more than 14% in the first four days of this week and was trading up another 9% in Friday's premarket. A short squeeze is likely driving the increase. Nearly 33% of the company's stock is sold short, and that level of short interest always draws the attention of some retail investors. The company has had no news this week to support the share price increase.

TMC the metals company Inc. ( NYSE: TMC ) soared by nearly 24% on Wednesday. The company has only been traded publicly for a week after a SPAC merger closed. As we noted Thursday, the SPAC transaction yielded just $137 million in fresh cash, far below its expected haul of around $600 million. When early backers declined to back the deal, they withdrew $270 million (technically a redemption) in expected cash. Then two more backers declined to participate in a PIPE (private investment in public equity) offering, taking another $220 million or so out of the completed transaction.

That left TMC with a small float, and that is a large target for investors looking for opportunities to drive the price higher. The stock traded down more than 5% in Friday's premarket session.

Burry told CNBC over e-mail that the media had blown his Tesla short bet out of proportion and that it was just a trade.
STOCKS・20 HOURS AGO
Markets Insider

US stocks turn mixed, closing near session highs, as the 10-year Treasury yield gave up most gains. Oil traded mixed, with Brent crude falling for the first time in three sessions, while gold dropped.
STOCKS・18 HOURS AGO
24/7 Wall St.

Dow lags behind as stocks end mostly higher ahead of earnings

Stocks ended mostly higher Monday as investors prepared for a busy week of corporate earnings. The Dow Jones Industrial Average bucked the positive tone, losing around 36 points, or 0.1%, to end near 35,259, according to preliminary figures. The S&P 500 rose around 15 points, or 0.3%, to close near 4,486, while the Nasdaq Composite advanced around 124 points, or 0.8%, finishing near 15,022. Shares of Walt Disney Co. , down 3%, were the biggest drag on the Dow, falling after being downgraded to equal-weight from overweight by Barclays.
STOCKS・19 HOURS AGO
Newsweek

Shares of Bakkt Holdings Inc. , the digital asset marketplace that was launched in 2018 by Intercontinental Exchange , fell on Monday in its first day trading, down around 2%. Its debut on the ICE-owned NYSE marks the consummation of its merger with special purpose acquisition corp, or SPAC, VPC Impact Acquisition Holdings , which it combined with in a deal with an enterprise value of about $2.1 billion. SPACs are companies that raise funds by going public and then acquire a business or businesses. VPC is backed by Chicago-based Victory Park Capital. Bakkt is headed Gavin Michael who was head of technology for Citigroup Inc.'s global consumer bank.
STOCKS・22 HOURS AGO
FOX40

Stocks wobbled to a mixed finish on Wall Street Monday as the market’s momentum slowed down following its best week since July.
STOCKS・14 HOURS AGO

The SEC on Monday released a report on market behavior surrounding the January meme stock runup that hiked shares of companies like GameStop and AMC into the stratosphere.
STOCKS・2 HOURS AGO
24/7 Wall St.

Shares of Occidental Petroleum Corp. rallied 2.3% in premarket trading Monday, putting them on track to snap a five-day losing streak, after Truist analyst Neal Dingmann became Wall Street's most bullish on the oil and natural gas exploration and production company, citing expectations that record free cash flow will continue. Dingmann raised his rating to buy from hold. He raised his price target to $50, which implies a 58% gain off Friday's closing price of $31.66, from $35. That is now the highest price target among the 29 analysts surveyed by FactSet. "[W]e believe the company will soon discuss...
STOCKS・1 DAY AGO
24/7 Wall St.

These five top companies are expected to lift the dividends they pay to shareholders, and their stocks are rated Buy across Wall Street, making them excellent total return candidates.
STOCKS・1 DAY AGO
MarketWatch

U.S. stock benchmarks rose Tuesday morning, extending gains after the largest four-day rally since late July for both the S&P 500 and Nasdaq Composite. The Dow Jones Industrial Average was up 0.3% at 35,371, the S&P 500 index climbed 0.3% to 4,501, while the Nasdaq Composite Index advanced 0.3% at 15,072. The positive backdrop for equities comes as good corporate earnings have largely overshadowed worries about supply-chain disruptions. In corporate news, Johnson & Johnson shares rose after the drugmaker said it brought in $502 million in world-wide sales of its COVID-19 vaccine in the third quarter of 2021.
STOCKS・1 HOUR AGO
MarketWatch

Shares of Energous Corp. rocketed 30% on massive volume in premarket trading Tuesday, after the over-the-air wireless charging company said the U.S. Federal Communications Commission granted equipment authorization for wireless power transfer at any distance. Trading volume ballooned to 16.5 million shares, enough make the stock the most actively traded ahead of the open, and compares with the full-day average of about 720,300 shares. Energous said the FCC approval adds to the approval in Europe for unlimited distance wireless charging. "The 1W Active Energy Harvesting transmitter can charge multiple devices at once, enabling at-any-distance over-the-air charging for the growing ecosystem of Internet of Things devices such as retail sensors, electronic shelf labels, industrial devices and more," the company said. The stock has gained 11.1% year to date through Monday, while the S&P 500 has advanced 19.5%.
STOCKS・1 HOUR AGO
MarketWatch

Amy Zhang, manager of the Alger Mid-Cap Focus Fund, says the asset class represents the 'best of both worlds.'
STOCKS・1 HOUR AGO
MarketWatch

U.S. stocks open higher Tuesday, extending gains after the largest four-day stretch of gains since late July for both the S&P 500 and Nasdaq Composite.
MIAMI, FL・1 HOUR AGO
Benzinga

Taiwan Semiconductor(NYSE:TSM) stock rose by 2.04% on Friday after the company reported its Q3 earnings results on Thursday, October 14, 2021 at 02:00 AM. Here's what investors need to know about the announcement. Earnings. Taiwan Semiconductor beat their estimated earnings by 3.85%, which did not surprise analysts. Revenue was up...
MARKETS・1 DAY AGO
24/7 Wall St.

These five top REITs pay dependable distributions above the 5% level. With the prospect of continued low interest rates, and the stock market extremely risky and overbought, it makes sense to have solid assets like real estate in your portfolio.
STOCKS・1 DAY AGO
24/7 Wall St.

The rising price of Bitcoin gave a solid boost to a cryptocurrency exchange on Friday, but Monday morning brought second thoughts.
STOCKS・1 DAY AGO