1,200 Afghan refugees to resettle in Missouri 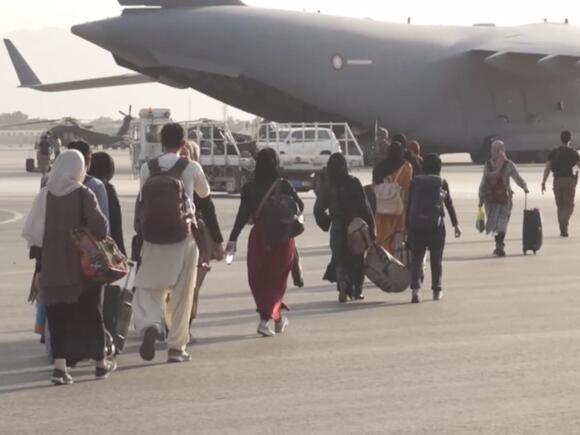 According to Gov. Mike Parson's office, the refugees are being relocated through contracted nonprofit agencies within the state.

Extensive background checks and biometric data are collected on the refugees before their move.

The governor's office said those who are being resettled under the Special Visa are Afghans who assisted U.S. military efforts in the War on Terror and are deemed "at-risk" if they stay in Afghanistan under Taliban rule.

Nearly half of those resettling will end up in the Kansas City area.

Columbia will receive 300 refugees and another 350 will resettle in St. Louis.

The governor's office noted the initial numbers are subject to change.

Lord we have to be very careful until we know what that are going to do. I don’t trust them. Sorry not sorry because Taliban have a history of violence.

oh good American taxpayers will be forced to feed house and free medical for Islamic cult members. While there is thousands and thousands of homeless American citizens and veterans. Oh good.

OVERLAND PARK, Kan. — When the cafecito flows, there is usually a crowd, dominoes tumbling, laughing and of course music playing. “You can’t have a gathering without music,” Gresia Cabrera said. A cofounder of “Cubanos Por Kansas City,” Cabrera came to the city in Missouri 22 years ago as a...
KANSAS CITY, MO・3 DAYS AGO
KSHB 41 Action News

Part of the KCK community and a broad coalition of activist groups marched downtown Friday night around the Unified Government of Wyandotte County and Kansas City, Kansas, building calling for leaders to welcome all people.
KANSAS CITY, KS・1 DAY AGO
KSHB 41 Action News

There are people that make such an impact during their life that when they're gone, it makes those they knew wonder how the world ever functioned without them.
KANSAS CITY, MO・1 DAY AGO

Three Missouri residents have been indicted by a grand jury for using the identities of deceased individuals to file hundreds of false stimulus claims and income tax returns, according to the United States Department of Justice.
MISSOURI STATE・2 DAYS AGO

Jury cites 'stand your ground law' for lack of charges

A grand jury in Platte County failed to charge a man in the case of a shooting that left two men dead.
PLATTE COUNTY, MO・2 DAYS AGO
KSHB 41 Action News

The Wichita City Council passed on Tuesday an ordinance aimed at banning discrimination in housing, employment and public accommodations.
WICHITA, KS・4 DAYS AGO

Kansas City, Missouri, has renamed its Human Relations Department to better reflect its mission. City Manager Brian Platt announced Tuesday that the department now will be called the Civil Rights and Equal Opportunity Department under the direction of Andrea Dorch.
KANSAS CITY, MO・4 DAYS AGO