Sports quiz of the week: US Open, Champions League and Ryder Cup 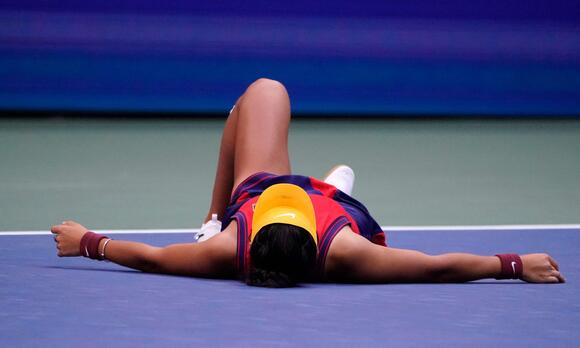 Mo Salah scored a hat-trick as Liverpool humiliated a shambolic Manchester United, who were 5-0 down after 50 minutes and had Paul Pogba sent off
PREMIER LEAGUE・2 DAYS AGO
The Guardian

US Open champion Emma Raducanu has pulled out of this month’s Kremlin Cup, citing a “tournament schedule change”. The 18-year-old Briton has played only one match since she shot to international stardom with her victory at Flushing Meadows last month, suffering a second-round defeat to Aliaksandra Sasnovich at the BNP Paribas Open.
TENNIS・11 DAYS AGO
The Guardian

Michail Antonio scored 18 minutes from time to seal a derby win for West Ham, who go ahead of Tottenham and into fourth place – for a couple of hours at least
PREMIER LEAGUE・2 DAYS AGO
The Independent

Emma Raducanu: US Open champion to return on WTA Tour in Austria

US Open champion Emma Raducanu will play on the WTA tour in Austria next month.Raducanu said in a video posted on Twitter: “I’m very excited to be coming to the Upper Austria Ladies Linz tournament this November. Hope to see you there.”The Upper Austria Ladies Linz event will be played from 6-12 November.The 18-year-old British star pulled out of this week’s VTB Kremlin Cup in Moscow saying she was looking forward to returning to the WTA Tour in the “next couple of weeks”.Raducanu has played only one match since she shot to international stardom with her victory at Flushing Meadows...
TENNIS・5 DAYS AGO

Leanne Wong and Kayla DiCello brought home silver and bronze medals in the all-around while Stephen Nedoroscik became the first American to win a world title on pommel horse.
SPORTS・2 DAYS AGO
fourfourtwo.com

Quiz! Can you name tell us who's scored the most Premier League goals out of these players?

Remember to tweet your scores @FourFourTwo and share with your friends. NOW TRY Quiz! Can you name the Italy line-ups from the Euro 2000 and Euro 2012 finals?. Boost your game with the best football kit deals on Amazon right now!. How many goals a player scored in the Premier...
PREMIER LEAGUE・12 DAYS AGO
101.9 KELO-FM

(Reuters) – U.S. Open champion Daniil Medvedev has withdrawn from next week’s Kremlin Cup in Moscow in order to focus on the remainder of the season, the Russian said in a statement on Friday. Medvedev, who beat Novak Djokovic in last month’s Flushing Meadows final to claim his maiden Grand...
TENNIS・11 DAYS AGO
golf365.com

Rory McIlroy has vowed to reap the positives from his Ryder Cup meltdown as he prepares to return to action at the big-money CJ Cup in Las Vegas this week. McIlroy broke down in tears in a rare show of emotion after winning his singles match against Xander Schauffele in Europe’s ill-fated quest at Whistling Straits in Wisconsin.
GOLF・13 DAYS AGO

LAS VEGAS – Can you picture Dustin Johnson being a Ryder Cup captain?. “I would love to do it one day,” he said Wednesday after his pro-am in the CJ Cup at The Summit Club. “I think it would be fun. I think I would be a good captain. “It’s...
GOLF・13 DAYS AGO
The Independent

Katie Archibald took her fourth medal of the 2021 UCI Track Cycling World Championships as she claimed silver in the points race on the final day in Roubaix, France.The Briton was second behind Belgium’s Lotte Kopecky with 72 points, four behind the champion and 12 better off than third-placed Kirsten Wild of Holland.The silver added to Archibald’s omnium gold and the bronzes she had secured in the team pursuit and madison.The 27-year-old, who won her second Olympic gold medal with victory in the madison in Tokyo during the summer, said: “[I’m] really pleased.“It’s almost like the harder it is, the...
CYCLING・2 DAYS AGO
chatsports.com

Sporting rekindled their hopes of reaching the Champions League knockout stage as a double by Uruguay defender Sebastian Coates helped secure a 4-1 victory at Besiktas in Group C on Tuesday. The result left Sporting third on three points from as many games while Besiktas remained bottom with none. Ajax...
UEFA・7 DAYS AGO
fourfourtwo.com

Quiz! Can you guess how far these 10 clubs have got in the Champions League?

Remember to tweet your scores @FourFourTwo and share with your friends. NOW TRY Quiz! Can you name the top 100 appearance makers in Champions League?. Boost your game with the best football kit deals on Amazon right now!. Some clubs have done better than you think in Europe. Some have...
UEFA・7 DAYS AGO

Liverpool FC Women began their Continental League Cup campaign with two points after a 1-1 draw with Aston Villa Women on Wednesday night. Shania Hayles’ clinical finish handed Villa an almost instantaneous lead at Prenton Park but the Reds were on top for long periods and levelled on 66 minutes through substitute Leanne Kiernan.
SOCCER・13 DAYS AGO
BBC

Quiz! Can you name the top 100 appearance makers in Champions League?

12 minutes on the clock, 100 players to guess. Remember to tweet your scores @FourFourTwo and share with your mates. NOW TRY Quiz! Can you name every Premier League-winning captain ever?. Boost your game with the best football kit deals on Amazon right now!. If you reach the Champions League...
PREMIER LEAGUE・7 DAYS AGO
New York Post

Xander Schauffele’s hangover after Team USA’s Ryder Cup win was his worst in years. “My wife said she hadn’t seen me that bad since college,” said Schauffele, a San Diego State alum, while speaking at The Summit Club Tuesday ahead of the CJ Cup this weekend in Las Vegas. “I’m...
GOLF・11 DAYS AGO

Rory McIlroy ‘was done with golf’ before Ryder Cup turnaround

Rory McIlroy has spoken about how he felt he was “done with golf” until 2022 at least before his turnaround in form on Sunday of the Ryder Cup. McIlroy had been ‘benched’ for the first time in his Ryder Cup career by captain Padraig Harrington as he struggled for form – but made up for it on the Sunday by being one of the few European players to take a full point off their American opponents.
GOLF・7 DAYS AGO
The Independent

Matt Fitzpatrick overcame his Ryder Cup heartbreak in his first event since Europe’s record-breaking defeat as he claimed a three-shot victory at the Andalucia Masters.The Englishman made it two Ryder Cup appearances without a point as Europe were defeated 19-9 at Whistling Straits, losing his singles match from one up with three to play to ensure the United States won by a record margin.But he showed no ill effects after a two-week break, carding a closing bogey-free 69 to finish at six under and hold off the challenge of Swede Sebastian Soderberg and Australia’s Min Woo LeeFitzpatrick started the day...
GOLF・9 DAYS AGO
The Ringer

What a week of Champions League! Musa and Ryan begin at the Wanda, which saw an epic game play out between Atlético Madrid and Liverpool (04:26), and discuss Ajax turning it on against Dortmund, a weird game between PSG and RB Leipzig (18:56), and a roundup of the rest of Tuesday’s action (25:58). After a quick shout-out to Leicester City and Patson Daka (28:40), it’s on to another thriller at Old Trafford, where Manchester United completed a late comeback to beat Atalanta and go top of the group, having been bottom at halftime, plus wins for Villarreal, Bayern, and Chelsea and a roundup of the rest of Wednesday’s games (44:39).
UEFA・5 DAYS AGO
Daily Mail

European Leagues has called for the 'complete dismissal' of plans to grant two clubs qualification for the new-look Champions League based on historic performance. European football's governing body UEFA rubber-stamped major changes to the format of the Champions League from the 2024-25 season onwards on April 19, including a new 36-team league replacing the existing eight groups of four.
UEFA・4 DAYS AGO