The flip or clamshell phone design has gone the way of the dinosaur, but there is still at least one company that makes them. Not only has Samsung been launching a flip phone for China and South Korea year after year after year, its Galaxy Z Flip even puts a modern and hi-tech spin to the old school form factor. Compared to those, the rugged CAT S22 Flip looks almost negligible, but it has a few important perks that make it worth a second look, especially if you’re in the market for tough-as-tanks phones. 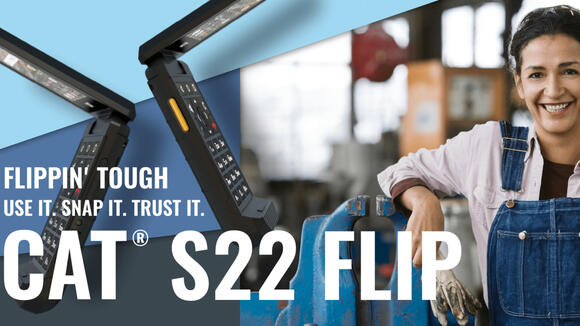 Like any other flip phone, the CAT S22 Flip comes with a traditional T9 keypad. Like many of the brand’s rugged phones, this one is also on the entry-level tier, powered by a Qualcomm Snapdragon 215 with only 2GB of RAM and 16GB of storage. The 2.8-inch 640×480 screen doesn’t even reach the bare 720p minimum for most content, but what the CAT S22 Flip lacks in hardware, it makes up for in software.

Google has a strict set of minimum requirements for a phone to be eligible to have Google Play Store, and, surprisingly, the CAT S22 Flip meets all of them. Not only does the phone run Android 11 Go Edition, it even has Google Play Store and apps pre-installed. And in case you’re wondering how you’d even use those apps, the phone’s 2.8-inch VGA screen is actually touch-sensitive, just like a regular smartphone. 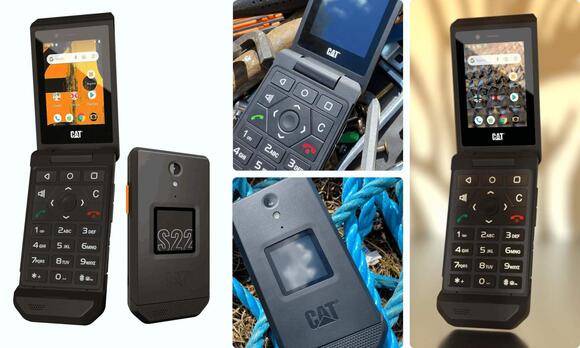 Of course, the CAT S22 Flip also has the makings of a typical rugged CAT phone, including an IP68 rating, MIL-SPEC 810H certification, and the like. It also comes with a programmable Push-to-Talk (PTT) button for those times you need instant access to some function. And in case you need to take pictures of broken equipment to send to your colleagues, the 5MP main camera will try to get the job done.

The CAT S22 Flip is available exclusively from T-Mobile for $234. It is pretty much an affordable niche smartphone in an already niche line of rugged mobile devices. That said, if you do need such a tank of a phone while rocking a 90s style, then this is probably the companion you need.

CAT S22 Flip is a rugged Android phone in old-school clamshell guise is written by JC Torres and originally posted on SlashGear .

Brave, the company behind the privacy-centric web browser by the same name, is betting big on its own search engine. Brave browser now defaults to the company’s search engine, offering it in the place of Google for users in select markets like the US, Canada, and the UK. Users in other countries will also see the change soon.
INTERNET・2 DAYS AGO
SlashGear

A few years ago, Google teased the almost magical ability that would allow people to remove “distracting objects” from photos, whether they be a fence or innocent bystanders. While that functionality has been available on some photo editing software like Photoshop, it was far from automatic nor convenient for mere mortals. It took more than four years for that moment to finally come, and Pixel 6 owners can now confidently take photos even when they know there are people or things lurking in the background.
CELL PHONES・2 DAYS AGO
SlashGear

The Google Pixel 6 Pro and the Google Pixel 6 represent Google’s best attempt to make a unique pair of Android smartphones. They epitomize the way the newest version of Android should be presented and can best be shown on top-tier hardware. But why two phones? Why not just one masterpiece? Today we’re taking a peek at the details – deciding which of the two you should probably choose if you’re looking for the best phone – or the phone that’s best in value.
CELL PHONES・2 DAYS AGO
T3.com

Samsung appears to be rolling out its RAM Plus feature to the Galaxy Z Fold 3 5G, amongst a range of other devices. RAM Plus uses your smartphone's unused storage space as virtual RAM, which can be used to slightly boost performance when using a plethora of apps, etc. The gains may be small, but the feature eases the workload for your struggling device's memory.
CELL PHONES・15 DAYS AGO

Android Users Are Being Charged Hundreds After Clicking on This Message

Most smartphone users are aware of the risks that come from downloading or clicking on something whose origins aren't quite clear. But the latest scam, which has been brewing since the end of 2020, may even fool the most tech-savvy among us. Hackers are targeting the 2.5 billion Android users around the world and have already managed to scam millions of them out of hundreds of dollars on their phone bills by having them click on an enticing, seemingly innocuous message. Read on to find out what to avoid saying "yes" to in order to make sure you don't fall victim to this new scam.
CELL PHONES・19 DAYS AGO
komando.com

Use a Samsung smartphone? Install this security patch now

Technology leaves our privacy and security at risk every day as hackers quickly adjust to new security protocols. This leaves your personal information and your devices at risk. Smartphone manufacturers are constantly working to ensure top-notch security on their devices, but with each update comes new opportunities for your phone to be hacked.
CELL PHONES・2 DAYS AGO
ANDROID COMMUNITY.COM

How to Unlock Android Phones Easily without Passcode

Smartphones these days come with plenty of on-screen log-in methods, and the lock screen is your most important line of defense against any unintended intrusion. There can be moments where you happen to forget a phone’s password/lock pattern, and that’s a precarious situation, to say the least. Another instance could...
CELL PHONES・10 DAYS AGO
Wired

How to Back Up Your Android Phone

TikTok star is shocked to discover Amazon has more than 3,000 recordings of her stored from her Echo speakers, as well as a list of her contacts and her LOCATION

A TikTok star was left shocked, after discovering Amazon had more than 3,000 recordings of her voice from an Echo speaker, including her location and contacts. The data privacy campaigner, who goes by the username @my.data.not.yours, asked Amazon to send all data it has on her, including from smart speakers.
BEHIND VIRAL VIDEOS・2 DAYS AGO
Silicon Republic

The authors of the study said that the data collection they observed went well beyond occasional communication with Android OS servers. There is a significant amount of data collection and sharing from Android handsets, new research has found. According to a study carried out by academics from Trinity College Dublin...
CELL PHONES・10 DAYS AGO
BGR.com

Don't Miss: Amazon’s epic Black Friday deals started early this year and you won’t believe how good they are! Rumors claimed that every iPhone 13 model would feature a larger battery. The new handsets would be slightly thicker, which would help Apple increase the battery capacity. The rumors turned out to be accurate. From mini to Pro Max, every iPhone 13 model has a larger battery pack than its predecessor. Also, they’re all 0.25mm thicker than their iPhone 12 predecessors. The reviews that followed proved all iPhone 13 models feature remarkable battery life, especially the iPhone 13 Pro Max. Real-life tests...
CELL PHONES・2 DAYS AGO
BGR.com

Best Android phones in 2021: Which Android device is right for you?

Apple’s iPhone series is rarely all that surprising. When you get a new iPhone, the overall experience is likely to be very similar to your previous device. Not so on the Android side though. There are Android phones of all shapes and sizes — not to mention different price points. In other words, there should be an Android phone for everyone. But that also means that finding the best Android phones can be a hard task. Of course, that’s why we’ve put together this guide. Samsung Galaxy S21 5G | Factory Unlocked Android Cell Phone | US Version 5G Price: $799.99 Buy Now There are a...
CELL PHONES・21 DAYS AGO
The Hollywood Reporter

Shopping: How to Pre-Order the Apple AirPods 3 (Plus the Best Deals on AirPods Pro and More)

If you purchase an independently reviewed product or service through a link on our website, we may receive an affiliate commission. At long last, Apple announced its highly-anticipated AirPods 3 at Monday’s Unleashed event — along with 14- and 16-inch MacBook Pros (and speedy new M1 Pro and M1 Max processors to go with them), fresh colorways for the HomePod mini speaker, a new voice-only tier for Apple Music and the forthcoming macOS Monterey set to roll out Oct. 25. Priced at $179, the third-generation AirPods have a new look that makes them nearly identical to the AirPods Pro, were it not...
ELECTRONICS・1 DAY AGO
BGR.com

Best tablets in 2021: Perfectly portable for play and productivity

A great tablet with a bright, crisp screen and processing power can be transformative when it comes to mobile entertainment. You can enjoy your favorite movies and TV shows on the go with it, but you can also get some work done on your commute, enjoy games, or just chill and listen to music. Tablets are a dime a dozen and most electronics manufacturers have their own brand, making it difficult to discern which one is the best for your budget and unique use case. We’ve put together this guide to help you track down the best tablets. There are several...
ELECTRONICS・10 DAYS AGO
inputmag.com

Squid Game is Netflix’s biggest original hit ever, with more than two-thirds of all subscribers reportedly watching the show since its release about a month ago. That success means millions of people are now invested in the Squid Game cinematic universe, eager for more content in any possible form. A...
CELL PHONES・1 DAY AGO
TechRadar

It seems Samsung has finally cracked the foldable phone market, with the Galaxy Z Flip 3 turning out to be, in our reviewer’s words, the first “clamshell foldable for the mainstream”. But it isn’t the only clamshell foldable in town. Motorola went with a similar compact foldable concept for its...
CELL PHONES・12 DAYS AGO
Tom's Guide

With the Apple iPhone 13 now out and the Google Pixel 6 about to launch, it'll soon be all eyes on Samsung for the arrival of the Galaxy S22 series of phones – and a new leak gives us more evidence of the redesign that appears to be on the way for the Ultra model.
CELL PHONES・11 DAYS AGO
Macworld

While the 3x telephoto camera, 120Hz ProMotion display, and incredible battery life are all great reasons to buy the iPhone 13 Pro, the biggest upgrade over every other iPhone is a much smaller feature: macro mode. But if you don’t want to spend hundreds of dollars to get it, the latest update to the Halide Mark II camera app will mimic it for a buck a month.
CELL PHONES・14 DAYS AGO
Android Central

With the Nokia XR20, it looks less like a phone cosplaying as a tank and more like a regular phone on steroids. Look at another recent Nokia phone like the Nokia G20 and make it much beefier — both externally and internally — and you'll have the XR20 in a nutshell.
CELL PHONES・14 DAYS AGO