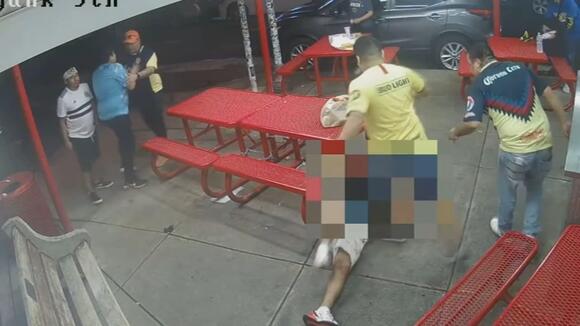 One camera angle shows the victim being punched and kicked while on the ground. Another camera shows one of the suspects wildly swinging a metal trash can lid. 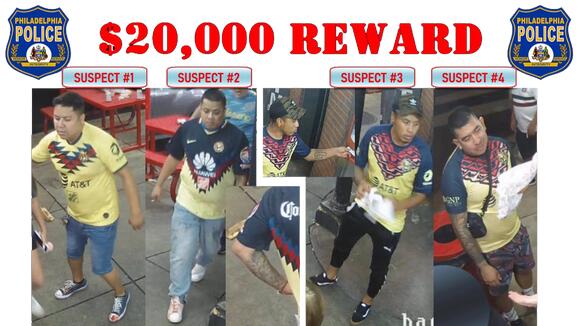 According to police, the victims were apparently at the Philadelphia Union soccer game in Chester, Pennsylvania on Wednesday night, where the Union lost to Mexico City's Club America. After the game, police say they went to Pat's where Cortez, his father and his friend got into an argument with four males wearing yellow soccer jerseys with Club America written across the shirt. That argument escalated into a fight. After the melee the suspects left along with the rest of their group in two vehicles. One vehicle is described as a grayish small four-door car, possibly a Ford, with distinct right rear quarter panel damage, and the other vehicle is described as a light-colored Ford Explorer SUV. 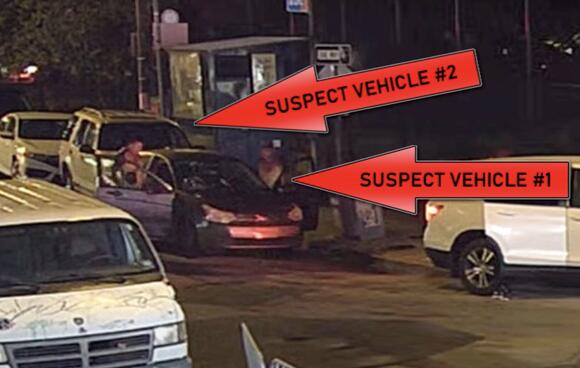 While alcohol isn't served at Pat's King of Steaks, detectives swabbed beer cans at the scene for DNA evidence. Neighbors say they know to avoid the area in the early morning hours. "More police is probably necessary. I would say that nothing good typically happens past one in the morning," said Nathan Gonzales of South Philadelphia.

Philadelphia police say a man from New York City was killed in a fight outside iconic cheesesteak shop Pat's King of Steaks.

The owner of Pat's said this latest incident has police stepping up patrols. He's told there will be a squad car parked at the intersection during late night and early morning hours. SEE ALSO: Police ID man charged with murder after shooting at Pat's King of Steaks in Philadelphia This is the second deadly incident at Pat's in just a few months. On July 22, 22-year-old David Padro, from the 2700 block of Federal Street in Camden, New Jersey, was shot in the back following a fight at Pat's. Thirty-six-year-old Paul Burkert of Doral Drive in Reading, Pa. was charged with murder in the case. The shooter's lawyer claims it was in self-defense, but the victim's family says otherwise.

Maybe cheesesteak spots should start closing around 11pm… I’ve been down there after 1am and most peeps are drunk and don’t care who they “fight”.

tell that to native americans, I'm sure they will say the same or worse about whites, after all, BLACKS NEVER STARTED 2 WORLD WARS, OR DROPPED 2 NUCLEAR BOMBS ON PEOPLE ...

What's up with Hispanics putting their hands on people at this place? wasn't there a hispanic kid that put his hands on a white dude here and got shot the other day as self defense?

UPDATE: The City of Philadelphia is offering up to $20,000 and the Citizens Crime Commission is offering an additional $1,000 for the arrest and conviction of the person responsible for killing Jess Crandall.
PHILADELPHIA, PA・4 HOURS AGO
6abc Action News

We fire up the grill for some smoky fusion, tour the new W Hotel and AC's first vegan restaurant, then finish up with ice cream and baked goods.
PHILADELPHIA, PA・1 DAY AGO
6abc Action News

People personally impacted by gun violence marched up Lehigh Avenue, from 22nd to 29th streets, to make sure their message was heard.
PHILADELPHIA, PA・1 DAY AGO
6abc Action News

Police have released new details following a Friday night crash outside a high school homecoming football game. The crash started when a 16-year-old male lost control of his Jeep while reversing from a parking space.
WILMINGTON, DE・9 HOURS AGO

At least three people have been taken to Christiana hospital after an auto-pedestrian accident in Wilmington, Delaware.
WILMINGTON, DE・1 DAY AGO
6abc Action News

Tropical Storm Ida blew through the Delaware Valley on September 1, 2021, leaving behind massive flooding and damage.
DOWNINGTOWN, PA・2 DAYS AGO

We can't say for certain that it will end the debate forever, but the latest battle over who makes the best Philly cheesesteak has a new victor.
PHILADELPHIA, PA・1 DAY AGO

We would like to hear from you.
PHILADELPHIA, PA・1 DAY AGO
6abc Action News

United States Postal Service inspectors said they are working to determine who is responsible for dumping dozens of pieces of personal mail in Philadelphia's Eastwick section.
PHILADELPHIA, PA・3 DAYS AGO
6abc Action News

At least two Upper Darby School District students have been suspended after shooting their classmates with an airsoft pellet gun while onboard a school bus.
UPPER DARBY, PA・2 DAYS AGO
6abc Action News

Officials with the prison guard union tell Action News 87 inmates managed to get out of their cells and took over their unit.
PHILADELPHIA, PA・2 DAYS AGO