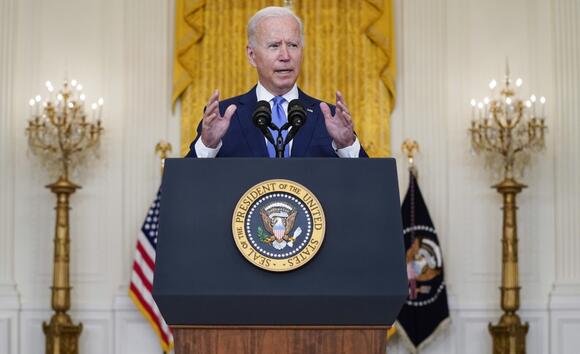 White House officials told the Washington Examiner the new strategy would present the vote as a fork in the road: Members can either protect the current economic status quo or extend a hand to the middle class.

One official added the president's spending agenda, nearly $3 trillion of which would be funded by raising taxes on corporations and the wealthy, is not about penalizing the rich but lowering "the cost of raising a child, of prescription drugs, of taking care of an aging parent, of healthcare, of high-speed internet, and of hearing aids."

"I believe we are at an inflection point in this country. One of those moments where the decisions we’re about to make can change — literally change — the trajectory of our nation for years and possibly decades to come," the president said during a speech at the White House. "Each inflection point in this nation’s history represents a fundamental choice. I believe that America at this moment is facing such a choice, and the choice is this: Are we going to continue with an economy where the overwhelming share of the benefits go to big corporations and the very wealthy, or are we going to take this moment right now to set this country on a new path? One that invests in this nation, creates real sustained economic growth, and that benefits everyone, including working people and middle-class folks? That’s something we haven’t realized in this country for decades."

"This is an opportunity to be the nation that we know we can be, a nation where all of us — all of us, not just those at the top — are getting a share of the benefits of a growing economy in the years ahead," he concluded. "Let’s not squander this moment trying to preserve an economy that hasn’t worked too well for Americans for a long time. Let’s not look backward just trying to rebuild what we had. Let’s look forward together as one America, not to build back but to build back better."

Assuming no Republicans vote "yay" on budget reconciliation, Biden will need all 50 Democratic votes to send the bill to his desk. Administration officials confirmed the president's Wednesday meetings with both Manchin and Sinema were to discuss a "path forward" on the $3.5 trillion package.

"Today's meeting was productive, and Kyrsten is continuing to work in good faith with her colleagues and President Biden as this legislation develops," a spokesman for Sinema's office said Wednesday evening.

"What matters to me is the details," he told the Wall Street Journal on Wednesday. "What are we buying, and then how are we paying for it? But our country still has needs beyond physical infrastructure."

Meanwhile, some Republican groups have not only praised Manchin and Sinema for standing up to what GOP officials call "dangerously reckless" spending but are also launching new multimillion ad campaigns against Biden's landmark bill.

America First Policy Institute, a nonprofit organization founded by former Trump administration Director of the Domestic Policy Council Brooke Rollins, plans to pour $10 million into ads opposing BBB in Arizona, West Virginia, and other purple states. A senior AFPI official told the Washington Examiner that roughly 100 conservative groups across the country are expected to contribute to the initiative, including Freedom Works, the Conservative Partnership Institute, and the Committee to Unleash Prosperity.

"The Biden economic agenda is designed with one goal in mind — to remake America and the principles upon which our nation was founded," she told the Washington Post . "These policies threaten American prosperity, small businesses, the economic health of every American family, and our standing in the world."

Kaelan Dorr, an AFPI spokesman, told the Washington Examiner the Biden administration is "actively undermining the incredible economic gains we saw under the previous administration and has done nothing but gaslight the American people who are living and breathing the impact of his disastrous agenda on a daily basis."

"He provides no solutions. He simply provides commentary that is being fed to him via teleprompter," Dorr added. "The American people should hope for a curtain call on this disaster of an administration because no matter how often he tries to change the rules or redefine success, the American people will remember this when they go to vote."

Missouri Republican Rep. Jason Smith similarly claimed the budget reconciliation package would "[unleash] the most reckless tax & spending plan in U.S. history. They are fueling inflation, which is driving up prices and crippling family budgets."

"All of this to reward billions to wealthy environmentalists and provide tax breaks to the top 1%," he said in a statement provided to the Washington Examiner. " As CBO recently confirmed, inflation is here, and the higher prices it brings is eroding the wages of the working class."

A White House spokesman claimed these attacks are evidence Biden is advancing his campaign promise to pursue economic equity.

"President Biden was elected decisively last year on a promise to rebuild the middle class by putting places like Scranton ahead of Wall Street and Park Avenue — and, unlike his predecessor, he’s delivering on that with an economic plan that will cut taxes and lower prices for working families by asking multinational corporations and the wealthiest Americans to pay their fair share,” White House spokesman Mike Gwin said in a statement. "It’s a badge of honor that those same wealthy interests are now attacking President Biden as he advances his plan to invest in the middle class and lower prices on essentials like prescription drugs and health care."

nothing biden has done or wants to do helps the middle class what's so ever. quite the opposite. anyone with a basic understanding of economics can see that. his goal is to eliminate the middle class. there is no room for middle class in communism

Binden does not need all that bill to pass.Binden just needs to stop lying. He always want to keep his knee on seniors neck. So if the bill doesn't pass seniors get nothing, well getting you Impeach will be better. Binden has to be Impeached.And hoping Binden will be out of office before 2022. don't pass anything that has to do with money till Binden is out of office.

Biden is actually going to tax the middle class with this bill...

Sen. Kyrsten Sinema, already in the national spotlight for becoming a roadblock to President Joe Biden's economic and social agenda, caused a stir Tuesday for donning a denim vest while presiding over the Senate.
U.S. POLITICS・7 HOURS AGO
WashingtonExaminer

WASHINGTON — The Senate confirmed two Republicans nominated by President Joe Biden to top diplomatic posts Tuesday. Former Arizona Sen. Jeff Flake was confirmed as U.S. ambassador to Turkey, and Cindy McCain, the widow of GOP Sen. John McCain of Arizona, will be the country's representative at the United Nations Agencies for Food and Agriculture.
CONGRESS & COURTS・9 HOURS AGO

Is Biden’s entire agenda about to shrink into nothingness?

This week, Democrats either reach an agreement on Biden’s social and climate agenda or the agenda may shrink into meaninglessness. The climate measures in particular need to be settled before Biden heads to Scotland for the UN climate summit this weekend, so other nations will see our commitment to reduce carbon emissions.
PRESIDENTIAL ELECTION・20 HOURS AGO
northwestgeorgianews.com

In their first two months in the White House, President Joe Biden and Vice President Kamala Harris were practically inseparable — Harris traveled with Biden to the Pentagon, sat in the Roosevelt Room when he met virtually with a foreign leader and delivered her own remarks on the administration’s priorities.
PRESIDENTIAL ELECTION・19 HOURS AGO
POLITICO

The president once more pushed back the scheduled release. But after 58 years, family members say the secrecy needs to end.
POTUS・1 DAY AGO
POLITICO

Rather than distance himself from a down-ballot race, the president has tied himself increasingly to it.
VIRGINIA STATE・18 HOURS AGO

It cites earlier rationale for rejecting claims in turning these new ones down. Here's the deal: President Joe Biden has rejected two additional requests by former President Donald Trump to shield sets of documents from the panel investigating the Jan. 6 insurrection, according to a new letter obtained by POLITICO.
PRESIDENTIAL ELECTION・1 DAY AGO
POLITICO

With help from Rishika Dugyala, Bianca Quilantan, Nancy Vu and Teresa Wiltz. What up Recast family! The President and Democrats inch closer to a framework on the sprawling human infrastructure plan and Biden is set to stump in Virginia with a week to go before gubernatorial elections there. But we kick things off today with the filibuster and the president signaling his willingness to modify Senate procedures.
PRESIDENTIAL ELECTION・12 HOURS AGO
Newsweek

The president was meeting with Sens. Kyrsten Sinema and Joe Manchin on Tuesday evening.
CONGRESS & COURTS・6 HOURS AGO

History could look back on Democrats’ sweeping spending and infrastructure bills in the same fashion as the New Deal programs of the 1930s and Great Society programs of the 1960s.
CONGRESS & COURTS・13 HOURS AGO
The Southern Maryland Chronicle

Democratic tax hikes: What's on the table and what's been abandoned

Democrats have floated a wide menu of tax hikes to pay for their infrastructure and social spending package. Here is what has been proposed and what has a chance of becoming law.
INCOME TAX・11 HOURS AGO
Business Insider

Democrats have an plan to finance their scaled-down social-spending bill with a tax on billionaires' assets. Senate Minority Leader Mitch McConnell on Monday was quick to oppose that idea. "This hair-brained scheme would have the IRS (Internal Revenue Service) penalizing people who invested wisely and compensating people who have invested...
CONGRESS & COURTS・1 DAY AGO

Tucker Carlson: Not long ago, Biden would've been impeached for his border policies

It's a disaster, and it's hard to believe that not so long ago, this country actually enforced its immigration laws. Not long ago at all. In fact, just two years ago, in August of 2019 federal agents kicked down the doors of seven separate chicken plants in central Mississippi. They arrested hundreds of foreign nationals who were living and working there in violation of American law. Several executives of the poultry plant were later indicted. Among the charges brought, child labor.
PRESIDENTIAL ELECTION・1 DAY AGO
POLITICO

Joe Biden's presidency may be transformed by a week

(CNN) — Joe Biden is tantalizingly close to fulfilling what supporters see as the historic promise of his presidency in the coming days, at a critical moment for his social policy transformation at home and his hopes of reclaiming US leadership overseas. After weeks of feuding between moderate and progressive...
PRESIDENTIAL ELECTION・2 DAYS AGO
POLITICO

The president is scheduled to attend a United Nations conference on climate change on Monday and Tuesday of next week.
WHITE HOUSE, TN・6 HOURS AGO