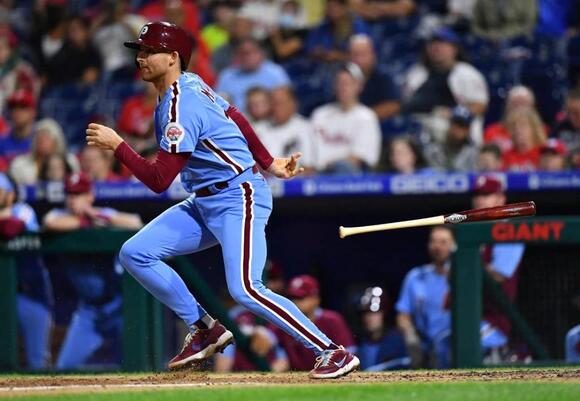 Bryce Harper belted a three-run homer to highlight his three-hit performance as the host Philadelphia Phillies overcame a seven-run deficit in a 17-8 victory over the Chicago Cubs on Thursday.

Harper also ripped a go-ahead double in the sixth inning off Manuel Rodriguez (3-3) as the Phillies (74-72) erased a seven-run deficit for the second time this season. They surrendered the game’s first seven runs in an 11-8 win over Washington on July 29.

Philadelphia’s Jean Segura (three hits) and Odubel Herrera each had three RBIs on Thursday, while Andrew McCutchen (three hits), Didi Gregorius and J.T. Realmuto each drove in two runs. The Phillies matched a season high in runs and erupted for 16 hits to move within three games of first-place Atlanta in the National League East.

Chicago’s Matt Duffy launched a three-run homer to highlight a seven-run third inning. Willson Contreras also went deep to join Patrick Wisdom in driving in two runs for the Cubs (66-81), who also squandered a seven-run lead in a 15-7 setback to Milwaukee on June 30. 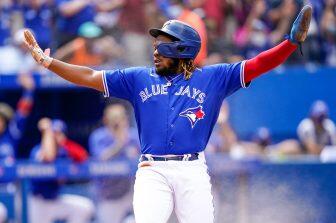 The Phillies followed up their seven-run fourth inning by scoring three more runs in the sixth, capped by Gregorius’ two-run single.

Contreras answered in the top of the seventh with his 19th homer of the season, but Herrera’s two-run double in the bottom of the inning staked the Phillies to a 12-8 lead. Harper stepped up two batters later and deposited a first-pitch slider from Rex Brothers over the wall in right field for his team-leading 33rd homer of the season and seventh in his last 11 games.

Hector Neris (3-6) picked up the win after striking out four batters in two innings of relief. 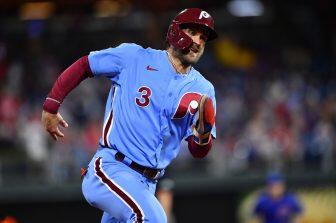 The game began in a decidedly different manner as Chicago walked the bases loaded before J.D. Hammer hit Ian Happ in the foot with a pitch to drive in the game’s first run.

Contreras had an RBI single, Wisdom plated two with a double and Duffy launched his fifth homer of the season and second in as many days.

Philadelphia answered by sending 12 men to the plate in the fourth inning.

McCutchen ripped a two-run double, Matt Joyce worked a bases-loaded walk and Herrera added an RBI single to cut Chicago’s advantage to 7-4. A run-scoring fielder’s choice brought the Phillies closer before Realmuto’s broken-bat single plated a pair to forge a tie at 7.

Trevor Story rumors: Could Philadelphia Phillies be a destination?

I enjoy putting together fake trade ideas. It forces me to assess other organizations, and their potential assets. If I’m doing my homework properly, I’m executing an idea that’s logical for both sides, not one that’s a slam-dunk for the Cubs. I try to assess needs and mindsets on both sides, and if I come relatively close, you might learn something for coming along for the ride. If the Cubs are trading from the MLB roster this off-season, trading from strength makes the most sense.
MLB・4 DAYS AGO
FanSided

This is the worst offseason plan for the Philadelphia Phillies

The Philadelphia Phillies season is officially over, and the Twitter GMs are already coming out of the woodwork to suggest plans for their favorite (or least favorite) team this offseason. If you’re unfamiliar with the term Twitter GM (or Fan GM), it’s a sports fan who thinks they could run...
MLB・14 DAYS AGO
FanSided

Finding a Mariners Trade Partner in the Philadelphia Phillies

The Mariners are in a rare position. Not only are they coming off of a 90 win season with exciting young talent at the big league level, but they also have one of the best farm systems in baseball. Their system, teeming with elite, high-upside talent will soon be making their appearance in the big leagues and will be given every opportunity to develop on a team competing to end the playoff drought.
MLB・1 DAY AGO

The Philadelphia Phillies were a rollercoaster of a baseball team, only leading to their 2021 demise. Sometimes you love something so much it exhausts you: a puppy, a job, a team. Something that genuinely puts a pit in your stomach if something goes wrong. Real pain. Nausea. I don’t mean...
MLB・8 DAYS AGO
southjersey.com

The Phillies finished with a winning season for the first time since 2011, but it was a truly hollow achievement. At 82-80, the Phillies seemed to squander a chance to make the playoffs when the National League East was its weakest in recent memory. The Atlanta Braves won their fourth...
MLB・7 DAYS AGO
News-Democrat

In a stunning move made eight days after the conclusion of their season, the St. Louis Cardinals dismissed manager Mike Shildt on Thursday, chairman Bill DeWitt Jr. and President of Baseball Operations John Mozeliak announced. “We have determined that we have a philosophical difference in the direction that our Major...
MLB・1 DAY AGO
Larry Brown Sports

The reaction San Francisco Giants first base coach Antoan Richardson had to first base umpire Gabe Morales’ call on a check swing went viral on Thursday night. The Giants lost 2-1 to the Los Angeles Dodgers in Game 5 of the NLDS at Oracle Par in San Francisco. The game ended after Morales said that Wilmer Flores went around on a check swing on a 0-2 pitch from Max Scherzer with two outs (see it here). Most people recognized right away that Morales blew the call.
MLB・20 HOURS AGO

Washington Nationals catcher Alex Avila announced his retirement on Sunday, pending the completion of the 2021 season. Avila, the son of Detroit Tigers general manager Al Avila, was a fifth-round pick of the Tigers in 2008. He made his debut with the club the following year and spent seven seasons in the Motor City.
MLB・26 DAYS AGO
FanSided

Why was Cardinals manager Mike Shildt fired? Team president John Mozeliak offered up an explanation that won’t make fans feel any better. The St. Louis Cardinals unceremoniously fired manager Mike Shildt on Friday. This after a historic 17-game winning streak turned the team’s season around so significantly that it clinched a spot in the postseason.
MLB・1 DAY AGO
Larry Brown Sports

Baseball fans are about to see more of Joc Pederson over the next week as his Atlanta Braves get set to face the Milwaukee Brewers in the NLDS. There is something fans should know about him: he just started wearing a pearl necklace during games. Yes, beginning last week, Pederson...
MLB・9 DAYS AGO
FanSided

3 Brewers who completely choked in the NLDS

The Chicago White Sox acquired reliever Craig Kimbrel from the Chicago Cubs at the trade deadline anticipating he would help fortify their bullpen for a World Series run. Instead, Kimbrel was a disaster on the South Side. A closer with the Cubs and throughout his big league career, the White Sox tried to use Kimbrel as a setup man.
MLB・2 DAYS AGO
FanSided

The Los Angeles Dodgers are fighting the San Francisco Giants for the NL West title and one of their fans is fighting security inside Dodger Stadium. Dodgers fans are dealing with some tough injury news surrounding Clayton Kershaw who had to leave Friday’s start early and his postseason availability is in doubt.
MLB・13 DAYS AGO
Jacksonville Journal Courier

The firing of Cardinals Manager Mike Shildt came as a huge surprise to me. In his three full seasons as the team's skipper, Shildt took the Cardinals to the postseason each year. In 2019 the Cardinals made it all the way to the National League Championship Series and lost to the Washington Nationals, and later that year, Shildt was named the National League Manager of the Year — the first non-playing manager to do so.
MLB・1 DAY AGO
mediaite.com

Los Angeles Dodgers fans haven’t portrayed themselves in the best manner this season, with crowd fights becoming a regular occurrence. Friday night, one person leveled up on the idea of bad or rowdy fan behavior, by flailing his fists in every direction hoping to connect with a police officer or security.
LOS ANGELES, CA・11 DAYS AGO

The Yankees, Red Sox and Blue Jays are in a dead heat for the American League wild card spots. And if Boston ends up missing out on a postseason appearance, it’ll be tough to overlook the horrible night that umpire Joe West had on Sunday. He very well may have...
MLB・18 DAYS AGO
USA TODAY

Three of our six experts think the NL Central champions will go on to win the World Series.
MLB・8 DAYS AGO
Audacy

It won't be cheap, but all signs seem to point to Freddie Freeman remaining with the Atlanta Braves beyond the 2021 season. ESPN's Jeff Passan wrote Wednesday that while Freeman figures to command a pretty large contract this winter, the belief is that the reigning National League MVP will ultimately re-sign with the Braves:
MLB・16 DAYS AGO
FanSided

3 Brewers who won’t be back after NLDS disappointment

The Milwaukee Brewers’ 2021 season has come to an end after falling to the Atlanta Braves in four games in the NLDS. Here are three players who likely won’t be back next season. The Milwaukee Brewers‘ plans to make it to the World Series for the first time since 1982...
MLB・2 DAYS AGO