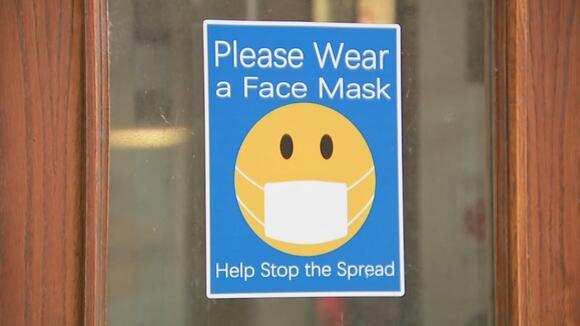 SALINAS, Calif. (KION) During public comment at last week’s Monterey County Board of Supervisors meeting, there was anger and strong opinions from both sides, over the implementation of a countywide indoor mask ordinance.

That ordinance now moving forward. The Monterey County Board of Supervisors approved language for a countywide indoor face-covering ordinance. The ordinance triggers based on the county's COVID community transmission rates.

Supervisors only need a majority vote in favor to adopt language for an indoor mask ordinance. Thursday, KION talked to Supervisor Mary Adams, following the county's decision to move forward in preparing an ordinance for the upcoming months after many business owners spoke out regarding concerns about having to enforce the mandate.

“I think it's better to be on the side of caution than not. When I took my oath of office, I took the oath because if I was to support and protect the health, safety and the well-being of the citizens and residents of Monterey County, not just in the Fifth District, but the whole county,” Mary Adams, Monterey County District 5 Supervisor.

To be clear, the ordinance wouldn’t go into effect right away or at all. It’s only triggered by the spread of the virus. Essentially, the mandate would act as a safety net and be used if when needed.

A press release from the County of Monterey stated, “The County’s Community Transmission Rate, as calculated by the CDC, is either “substantial” or “high.” Face covering requirements would also be triggered seven days after the County’s Community Transmission Rate transitions to “substantial” or “high” from “moderate” or “low.”

Still, people feel that supervisors are out of line for trying to implement a mask ordinance, when the Health Officer Dr. Edward Moreno feels like one is not necessary, given Monterey County’s low infection rate.

One public speaker at last week’s meeting said, "For a year and a half held doctor Edward Moreno was the guy who Doctor Moreno said he's the guy who we need to go with what he says. now our supervisors what to say we're the doctors, we're going to go by our decisions and not go by what Doctor Moreno says."

A final vote on the county-wide mask ordinance is scheduled for September 21st.

KION did try to reach out to businesses and business owners who spoke at the public meeting last week, but we did not hear back. We also tried to connect with the other Monterey County Supervisors, both for or against the mandate, most responded but we’re unavailable to speak at the time.

Click here for the mask mandate information from the county.

Supervisor, Mary Adams, needs to take a hike!... Even CDC has said that Monterey County has some of the lowest Covid infection rates in California... Democratic supervisors & politicians will do anything to hold onto the paranoia & control... SHOW US THE (ACTUAL) SCIENCE & #'S!!

In an effort to advance aerospace and technology on the central coast, organizations are coming together to apply for a 70 million dollar grant. It's part of the Biden administration's "Build Back Better" regional challenge. The post Uplift Central Coast Coalition vying for Biden Build Back Better grant appeared first on KION546.
HOLLISTER, CA・8 HOURS AGO
KION News Channel 5/46

A new safe parking ordinance was first brought to the table to try and address not only concerns of people living in Santa Cruz but also the impacts on those who are living in their vehicles.  The post A new parking ordinance could provide safe spaces for RVs in Santa Cruz appeared first on KION546.
SANTA CRUZ, CA・4 HOURS AGO
KION News Channel 5/46

If you’ve been affected by the power outages, you may be eligible for SNAP or CalFresh benefits

SALINAS, Calif. (KION) Mayor Kimbley Craig announced the new Salinas Police Chief Monday morning. Interim Police Chief Roberto Filice was promoted to Chief of Police. "He has been a significant part of the shift in the face and attitude and direction of salinas police dept over the last five years," Craig said. "The focus on The post Salinas Police Department announces new Chief of Police appeared first on KION546.
SALINAS, CA・1 DAY AGO

Atmospheric River aftermath: How the recent weather event will affect the drought in Santa Cruz County

The atmospheric river that passed through Northern California and the central coast has left its mark with a rockslide in Butte County, inches of rain, and evacuation orders in the San Lorenzo Valley. The post Atmospheric River aftermath: How the recent weather event will affect the drought in Santa Cruz County appeared first on KION546.
SANTA CRUZ COUNTY, CA・1 DAY AGO
KION News Channel 5/46

See where the rainstorm is affecting the Central Coast

From debris flow to power outages, we've provided a list of maps where you can see where the weather has affected power lines and traffic in your area. The post See where the rainstorm is affecting the Central Coast appeared first on KION546.
SANTA CRUZ COUNTY, CA・3 DAYS AGO
KION News Channel 5/46

MONTEREY COUNTY, Calif. (KION) Dozens of parents opposing the COVID-19 vaccine mandate participated in a statewide school walkout by keeping their children at home. “We are the parents, we're making the decisions, the government is not in charge of our children," said Marialise Lombardo. Lombardo and other parents gathered in Carmel to discuss options with The post Monterey County parents take part in statewide school walkout appeared first on KION546.
MONTEREY COUNTY, CA・9 DAYS AGO
KION News Channel 5/46