By 6abc Digital Staff, George Solis
6abc Action News
2021-09-17
Philadelphia police are searching for the driver who struck a young child on Wednesday night in the city's Kensington section. It happened around 6 p.m. at Wishart and G streets. Exclusive video obtained by Action News shows the moment 6-year-old Honesty was hit by a driver who was traveling the wrong way on East Wishart Street. A nearby camera was rolling as the driver strikes the child before speeding away. "The front of the minivan strikes her and her body gets launched 50 feet. She loses some of the slippers she's wearing. When police find her, she is conscious and talking," said Chief Inspector Scott Small with the Philadelphia Police Department. Honesty was rushed to Saint Christopher's Hospital for Children with injuries reportedly to the entire right side of her body including her face. Action News spoke with Jalisa Love, the victim's mother, outside of the hospital. SEE ALSO: 6-year-old girl hit by vehicle while fleeing gunfire in Kensington

A young child was rushed to the hospital after she was hit by a vehicle in Philadelphia on Wednesday night.

"She's 6, she's 6 years old. What am I going to tell her? She's 6. She don't want to go outside no more, go to school, no nothing," said Love. It was initially believed Honesty may have been grazed by a bullet, but police later clarified that all her injuries were crash-related. But according to her mother, it makes little difference. 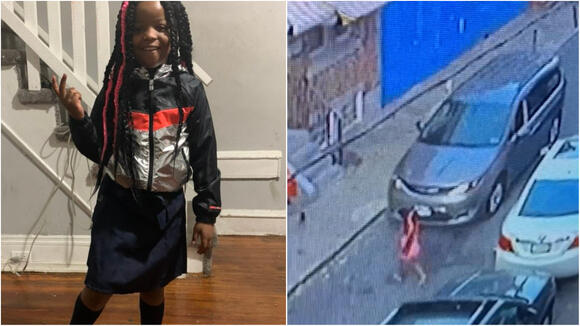 "She's scared to go home. She said the man going to get her," said Love. Investigators said based on the video, they believe they are looking for a woman driving a gray Chrysler Pacifica. Police have been combing the surrounding area for more video and witnesses. No arrests have been made. Anyone with any information is asked to call police at 215-686-TIPS.

OMG, How in the world can someone do something so horrible and takes off not knowing how the little baby is doing is CRAZY and SENSELESS. I'm PRAYING 🙏🙏🙏 for your baby/family and I PRAY that whoever you are turn your self in. My heart ❤️❤️ goes out to the family

Witnesses say a woman was crossing the street with her son, Ja-Kha House, when the driver of a white Buick Enclave struck the child.
PHILADELPHIA, PA・9 HOURS AGO
6abc Action News

Police say a 34-year-old man tried to enter the home and kicked the front door off its hinges
PHILADELPHIA, PA・19 HOURS AGO
6abc Action News

One year after Wallace shooting, we ask: Do more Philadelphia police officers have Tasers?

The officers who shot Walter Wallace Jr. last year didn't have Tasers. One year later, Action News found not much has changed.
PHILADELPHIA, PA・7 HOURS AGO

Philadelphia police officer shot after being attacked by man with hammer, pickaxe

A Philadelphia police officer was rushed to the hospital after he was shot while responding to a dispute between a landlord and tenant on Tuesday afternoon.
PHILADELPHIA, PA・1 HOUR AGO
6abc Action News

UPDATE: Police in Abington Township say a man accused of filming a girl inside a mall dressing room has turned himself in.
MONTGOMERY COUNTY, PA・8 HOURS AGO
6abc Action News

Surveillance video shows the man rush up to the 2-year-old and try to grab him from his mother.
PHILADELPHIA, PA・1 DAY AGO
6abc Action News

Police say a male victim died after being shot in the head and body. A 24-year-old pregnant woman was also shot one time in her lower back.
PHILADELPHIA, PA・1 DAY AGO

2 men wanted in connection to murder in Pottstown, Montgomery County

The latest homicides in the city include a couple of fatal incidents in Southwest Philadelphia. In one shooting in the Eastwick neighborhood, a man was killed and a pregnant woman was injured.
PHILADELPHIA, PA・15 HOURS AGO

Police are looking for the person who shot and killed a man in Philadelphia's Mantua neighborhood.
PHILADELPHIA, PA・2 DAYS AGO
6abc Action News

A teenager is recovering after he was shot in Wilmington, Delaware.
WILMINGTON, DE・20 HOURS AGO
6abc Action News

Firefighters are battling a massive blaze inside of a business in Pennsauken, Camden County on Tuesday night.
PENNSAUKEN TOWNSHIP, NJ・3 HOURS AGO
6abc Action News

Driver shot in the face, crashes into building in Southwest Philadelphia

A 22-year-old man is in the hospital after getting shot in the face and crashing car in Southwest Philadelphia
PHILADELPHIA, PA・3 DAYS AGO
6abc Action News

According to officials, Kai Johnson turned himself in at the Pemberton Township Police Department late Friday afternoon
1 DAY AGO
6abc Action News

"I would like to have justice for my son. It's not fair. He wasn't into the streets. He wasn't a violent person," said the mother of Aamed Glover.
PHILADELPHIA, PA・3 DAYS AGO
6abc Action News

Initial reports indicated three people were trapped inside, but firefighters say everyone was able to get out safely.
PHILADELPHIA, PA・2 DAYS AGO