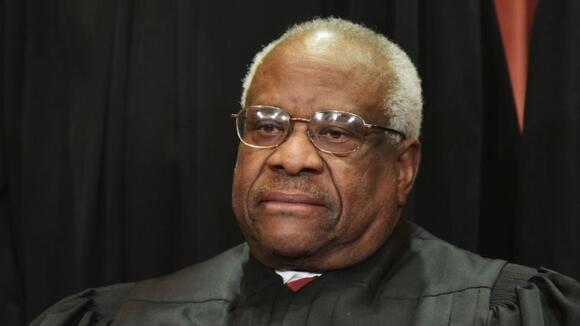 Supreme Court Justice Clarence Thomas on Thursday warned against “destroying our institutions because they don't give us what we want, when we want it," arguing that the high court must remain independent from political polarization.

In an address to more than 800 students at the University of Notre Dame, Thomas said that the country has “gotten to the point where we’re really good at finding something that separates us,” according to The Washington Post.

Thomas, the longest-serving justice and a member of the court’s conservative wing, also pushed back on criticism that Supreme Court justices are aiming to promote their own political agendas in their decisions.

“I think the media makes it sound as though you are just always going right to your personal preference. So if they think you are antiabortion or something personally, they think that’s the way you always will come out,” Thomas, who is Catholic, explained.

“They think you’re for this or for that. They think you become like a politician,” he continued. “That’s a problem. You’re going to jeopardize any faith in the legal institutions.”

When asked at Thursday’s event if his Catholic faith has been at conflict with some of the legal questions that have come before the court, he responded, “that’s not the role of a judge.”

“You do your job and you go cry alone,” he added, according to The Associated Press.

He also criticized some judges who he argued are “venturing into areas we should not have entered into” by appearing to taking on roles as legislators or politicians.

“The court was thought to be the least dangerous branch and we may have become the most dangerous,” Thomas said, according to the AP. “And I think that’s problematic.”

According to the Post, the George H.W. Bush-nominated justice said that while the high court has some flaws, justices do not rule based on “personal preferences,” adding that the country’s leaders should not “allow others to manipulate our institutions when we don’t get the outcome that we like.”

His remarks come after the Supreme Court received intense pushback this month for declining to block a controversial Texas law that bans abortions after a fetal heartbeat is detected, which can occur as early as six weeks into pregnancy.

Thomas was among the majority in the 5-4 decision to reject an emergency request to prevent the law from taking effect, citing procedural complexities. He also noted that the decision did not resolve “serious questions” about the constitutionality of the Texas law.

The court in its upcoming term is set to review a Mississippi law that bans abortion after 15 weeks, with Republicans and anti-abortion groups hoping that the 6-3 conservative majority on the high court could lead to a decision overturning the landmark 1973 ruling of Roe v. Wade that legalized abortion nationwide.

Thomas has called on the court to overturn Roe v. Wade, and in a 1992 decision was among the four justices who ruled in favor of doing so.

The U.S. Supreme Court said it will hear arguments on Texas’ heartbeat bill Nov. 2, according to a Friday announcement. The court granted certiorari to the case, Whole Woman’s Health et al. v. Jackson et al., on an expedited basis and will not block the Texas abortion law for the time being as litigation over the bill continues.
CONGRESS & COURTS・1 DAY AGO
Houston Chronicle

The Supreme Court ruled on Friday that Texas’ new ban on abortions after six weeks gestation will stand until the court can hear oral arguments from those challenging it. Justice Sonia Sotomayor dissented, calling the law “patently unconstitutional” and criticizing the majority for letting the ban stand until the court begins to hear oral arguments against it on Nov. 1. “For the second time, the court is presented with an application to enjoin a statute enacted in open disregard of the constitutional rights of women seeking abortion care in Texas,” she wrote. “For the second time, the court declines to act immediately to protect these women from grave and irreparable harm.”
CONGRESS & COURTS・3 DAYS AGO
Washington Post

McConnell lauds Thomas, says Supreme Court should not heed the ‘rule of polls’

Senate Minority Leader Mitch McConnell lauded Justice Clarence Thomas on Thursday night as a “legal titan” whose independence and courage are illustrated through his “jurisprudence on unborn life.”. The Supreme Court is currently being asked to overturn Roe v. Wade and its establishment of the constitutional right to abortion in...
CONGRESS & COURTS・4 DAYS AGO

Texas filed its brief with the high court Thursday in response to the Justice Department's request the court block the enforcement of the law. The state's attorneys pointed at the ruling by a three-judge panel of the Fifth Circuit Court of Appeals that upheld the law after a federal judge ordered its enforcement to be halted as why the law should be left in place.
CONGRESS & COURTS・3 DAYS AGO
ABA Journal

Supreme Court seems to be 'reshaping itself in Justice Thomas’ image,' op-ed says

We may be seeing the emergence of the “Thomas Court,” as the 6-3 conservative majority on the U.S. Supreme Court considers cases involving abortion, religious freedom and gun rights this term, according to a New York Times op-ed. After Justice Clarence Thomas joined the Supreme Court 30 years ago this...
JUSTICE, IL・5 DAYS AGO
abovethelaw.com

Today marks the 30th anniversary of the Senate voting 52-48 to install Clarence Thomas on the Supreme Court. Milestones like these are all about looking back and appreciating the journey, and Justice Thomas certainly had an unlikely journey to this job. People may not remember this, but in 1988, George H.W. Bush campaigned on the evils of racial quotas echoing the sentiment of Reagan’s EEOC Chair — a young Clarence Thomas — who said that any form of affirmative action amounted to “a narcotic of dependency.” But when Justice Thurgood Marshall resigned, against all odds, the White House dug deep and found the only Black Republican on the appellate bench. An almost astronomical coincidence.
CONGRESS & COURTS・10 DAYS AGO
Fox News

People in public life often like to depict themselves as fearless. Few of them live up to the hype. The truly fearless tend not to advertise it, but let their deeds speak for themselves. And they are rare. Justice Clarence Thomas is in that select category. Thirty years have passed...
CONGRESS & COURTS・11 DAYS AGO

Clarence Thomas marks 30 years on the Supreme Court: A look back at the most vicious attacks he's weathered

This week marks the 30th anniversary of Clarence Thomas' confirmation to sit on the Supreme Court, and with it more than a generation of vitriolic attacks against the justice. Michael Pack's 2020 documentary "Created Equal: Clarence Thomas in His Own Words," highlighted Thomas' impressive resume, while also putting a spotlight on the consistent barbs against the second Black man to reach the high court.
CONGRESS & COURTS・11 DAYS AGO
WashingtonExaminer

After 30 years, Clarence Thomas now ‘the most important justice’

Nearly 30 years to the day that Clarence Thomas won a hard-fought Senate vote to become the Supreme Court’s 106th justice, his publisher is releasing audio and Kindle versions of his bestselling autobiography that describes his path from poor black child to the top of the legal world.
CONGRESS & COURTS・13 DAYS AGO
POLITICO

Tuesday's arguments marked the first abortion case to be argued in full before the court's 6-3 conservative majority.
WASHINGTON, DC・13 DAYS AGO
ksl.com

Supreme Court rulings always include the perspective of a white male, but often exclude viewpoints of Black and Latina justices

In recent decades, much progress has been made in diversifying the Supreme Court. While only white males served as justices for more than 175 years, the court now includes three female justices, one Black and one Latina justice. Despite the increased diversity, however, the court’s voting rules often exclude minority viewpoints. Like most other courts, the Supreme Court decides its cases by a majority vote. If at least five of the nine justices agree on a resolution, they are able to determine the court’s decision and impose their preferred outcome. If other justices disagree, they cannot ensure that their views are taken...
CONGRESS & COURTS・3 HOURS AGO
fox5atlanta.com

Justice Clarence Thomas is a Georgia native who was born in Chatham County. He was sworn into the Supreme Court on October 23, 1991.
GEORGIA STATE・4 DAYS AGO
Vail Daily

Letter: Precedent and the Supreme Court

I am one of those dreaded snowbirds, living in Eagle County for five months in the summer season and then (being the cold weather wimp I am), my husband and I head for warm sea-level winters. I am also a retired attorney from California and look forward to reading Rohn Robbins’ legal commentary every Wednesday. When he talks about his experiences in court and with clients, it brings a smile to my face, sometimes momentarily making me miss my old work. But then I know the mountains are calling for me to hike and see the incredible beauty, allowing me to forget about the stressful life I had as an attorney.
EAGLE COUNTY, CO・4 DAYS AGO
bloomberglaw.com

WASHINGTON — President Joe Biden’s commission evaluating potential reform of the Supreme Court cautioned that increasing the size of the court might be perceived as partisan maneuvering, but noted there is widespread support for term limits on the justices, who enjoy life tenure. The Presidential Commission on the Supreme Court...
CONGRESS & COURTS・11 DAYS AGO
The Independent

US Supreme Court Justice Sonia Sotomayor has warned that the impact of the high court’s latest refusal to block a ban on abortions at six weeks of pregnancy in Texas is “catastrophic”.The nation’s high court agreed to fast track a review of the law, with the court beginning arguments in the case on 1 November. But the ban will remain in effect, the court ruled on 22 October.Justice Sotomayor wrote in a seven-page opinion that she “cannot capture the totality of this harm in these pages” and criticised the court’s apparent flattening of constitutional rights protected under the landmark...
CONGRESS & COURTS・3 DAYS AGO
Slate

Slate Plus members get ad-free versions of all Slate podcasts, plus extra segments, bonus episodes, and more. Try it today for just $1. Please enable javascript to get your Slate Plus feeds. Episode Notes. Dahlia Lithwick is joined by Dean Erwin Chemerinsky of Berkeley Law School at the University of...
CONGRESS & COURTS・3 DAYS AGO
MSNBC

A national Grinnel College/Selzer poll released this week found nearly two-thirds of Americans agree that politics drives Supreme Court rulings. In fact, it was a rare area of bipartisan agreement: Democrats, Republicans, and independents all answered the same question in roughly the same way. "This is a nightmare scenario for...
CONGRESS & COURTS・4 DAYS AGO