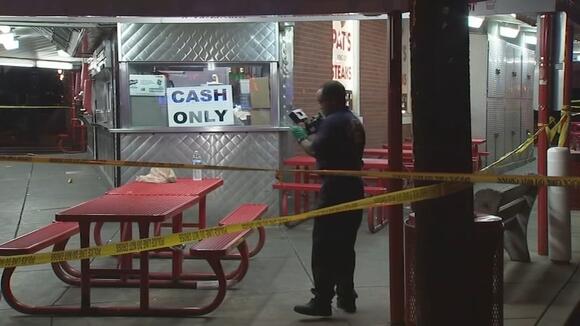 Philadelphia police say a man from New York City was killed in a fight outside iconic cheesesteak shop Pat's King of Steaks, and now the search is on for four suspects. Isidro Cortez, 28, of Queens died after the assault that happened around 2 a.m. Thursday at 1300 E. Passyunk Avenue. Two other men, Cortez's 64-year-old father and his 28-year-old friend, suffered minor injuries and were treated at Thomas Jefferson University Hospital. According to police, the victims were apparently at the Philadelphia Union soccer game in Chester, Pennsylvania, on Wednesday night, where the Union lost to Mexico City's Club America. After the game, police say they went to Pat's Steaks where Cortez, his father and his friend got into an argument with four males wearing yellow soccer jerseys with Club America written across the shirt. The argument escalated, police say, and the men in soccer jerseys punched Cortez, kicked him, and struck him with a metal trash can lid. Cortez was pronounced dead at the scene. The four suspects are described as males in their 20s. The suspects left the scene in a white SUV. While alcohol isn't served at Pat's King of Steaks, detectives swabbed beer cans at the scene for DNA evidence. Neighbors say they know to avoid the area in the early morning hours. "More police is probably necessary, I would say that nothing good typically happens past one in the morning," said Nathan Gonzales of South Philadelphia. Investigators said there are several cameras with good quality footage showing the fleeing vehicle, the fight, and the suspects. The owner of Pat's said this latest incident has police stepping up patrols. He's told there will be a squad car parked at the intersection during late night and early morning hours. This is the second deadly incident at Pat's in just a few months. On July 22, 22-year-old David Padro, from Camden, New Jersey, was shot in the back following a fight at Pat's. Thirty-six-year-old Paul Burkert from Reading, Pennsylvania, was charged with murder in the case. The shooter's lawyer claims it was in self-defense, but the victim's family says otherwise. MORE: Police body cam video shows Gabby Petito, boyfriend after 911 call

best to avoid arguing with a group of Hispanics that have been drinking that late at night..call door dash going forward

The NYPD says they got a call about a person holding two kitchen knives and harassing elderly people at the intersection of Elizabeth and Grand streets at around 8:37 a.m.
NEW YORK CITY, NY・16 HOURS AGO
ABCNY

Tariq Haq opened his spot in Park Slope three years ago. It's the third restaurant he's owned and this time he pays tribute to his Indian heritage.
BROOKLYN, NY・15 HOURS AGO
ABCNY

Arrest made in murder, robbery of food deliveryman on Lower East Side

An arrest was made in the murder and robbery of a Grubhub deliveryman on the Lower East Side.
PUBLIC SAFETY・9 HOURS AGO
ABCNY

On Thursday evening, there was another day of violence in the South Bronx, after there was a shooting on the street - just steps from PS 65 Mother Hale Academy on E. 141 Street and Cypress Avenue.
NEW YORK CITY, NY・1 DAY AGO
ABCNY

4 shot when gunfire rings out on crowded Brooklyn street

A manhunt is underway after four people were shot outside a store in Brooklyn Thursday morning.
BROOKLYN, NY・1 DAY AGO
ABCNY

The two state-of-the-art gaming trucks will visit neighborhoods and provide safe and fun excitement for the youth in Brooklyn and throughout the city.
BROOKLYN, NY・2 DAYS AGO
ABCNY

The event took place outside Adlai Stevenson High School in the Soundview section of the Bronx.
NEW YORK CITY, NY・15 HOURS AGO

A deli worker was stabbed to death in East Harlem late Tuesday after he got into an altercation with a man who tried to rob the bodega.
NEW YORK CITY, NY・2 DAYS AGO
ABCNY

A fight over Halloween decorations in Toms River had one of the largest residential real estate companies in our area threatening to toss tenants.
14 HOURS AGO
ABCNY

SUMMIT One Vanderbilt opens as New York City rebounds welcoming back visitors back from across the globe.
MANHATTAN, NY・1 DAY AGO

The 85-year-old man was attempting to get inside his building when a gunman approached him and demanded money.
BRONX, NY・1 DAY AGO
ABCNY

Moussa Cisse had nothing to say as he walked out of the 32 Precinct - he was finally in handcuffs after 10 months on the run.
MANHATTAN, NY・9 HOURS AGO
ABCNY

Gabby Petito timeline: Everything we know about her disappearance

Gabby Petito was traveling with her fiancé, Brian Laundrie, in a cargo van the two had outfitted as a makeshift recreational vehicle for a months-long cross-country road trip when she mysteriously disappeared.
NEW YORK CITY, NY・1 DAY AGO

Two-and-a-half-year-old Pit Bull mix 'Hansel' was having a ball on Thursday as his owner Kelly Skinner and other kind-hearted people at West Hills Animal Hospital showered him with attention.
PETS・1 DAY AGO
ABCNY

Dental records prove that remains found in a Florida park are those of Gabby Petito's boyfriend, Brian Laundrie, according to the FBI.
FLORIDA STATE・1 DAY AGO
ABCNY

Video from the scene showed extensive damage to both vehicles and debris scattered across the intersection.
QUEENS, NY・3 DAYS AGO
ABCNY

It happened Monday at 5:45 a.m. inside a building on Leland Avenue in Parkchester.
BRONX, NY・3 DAYS AGO