By Eyewitness News
ABCNY
28 days ago 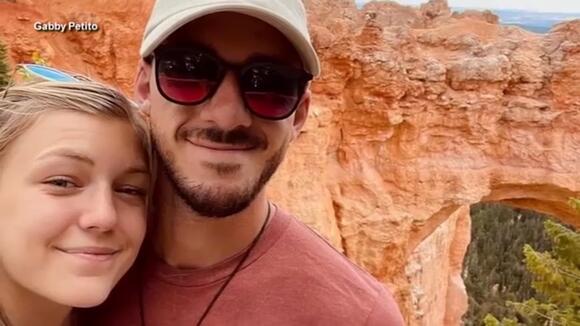 Hours after the family of 22-year-old Gabby Petito issued a statement to the family of her fiancé, begging for information in her disappearance, a member of his family is speaking out. Brian Laundrie's sister, Cassie Laundrie, broke her silence in an exclusive interview with GMA. "Obviously me and my family want Gabby to be found safe," Laundrie said. "She's like a sister and my children love her, and all I want is for her to come home safe and found and this to be just a big misunderstanding." WATCH | FULL Exclusive interview with Brian Laundrie's sister:

Petito has been missing since late August while on a cross-country trip with Laundrie. The letter from Petito's family was read by the family's attorney, Richard Stafford, on Long Island, where both Petito and Laundrie are originally from despite having lived in Florida for the past two years with Laundrie's parents. Click here to read the full letter. So far, the Laundries have not aided the investigation, citing advice from legal counsel, which authorities say is hindering the investigation. Brian Laundrie has been named a person of interest in the case, and the letter comes on the same day police in Utah released body camera footage of officers' encounter with the couple on August 12. WATCH THE FULL BODY CAM VIDEO:

Yea really? your brother murdered her & u should be demanding him to tell the truth instead of making her family suffer like this......your family is enabling this killer......u should be ashamed......if she was alive, she would have called her dad by now.....

I'm pretty good at reading the body language in this video and she is just repeating a script she thought of. you can tell by the shrugging and the way she is talking.

A missing hiker found dead in Wyoming near where authorities discovered the remains of Long Island native Gabby Petito died by suicide, officials said. The Teton County Coroner’s Office in Wyoming said Robert Lowery, a father of two from Houston, died by suicide from a gunshot wound to the head, Fox News reported Wednesday.
PUBLIC SAFETY・9 DAYS AGO
Fox News

NORTH PORT, Fla. – The Gabby Petito autopsy finding that she died of homicide by strangulation indicates a likelihood of domestic violence and deadly intent at the Wyoming campsite where an FBI-led investigation uncovered her remains last month, experts tell Fox News. Her fiancé, Brian Laundrie, who shared the campsite...
NORTH PORT, FL・1 DAY AGO
HollywoodLife

Dog The Bounty Hunter’s wife Francie showed her support to the reality star, as he offered an update on his hunt to catch Brian Laundrie. The search is still on for Brian Laundrie, but Dog The Bounty Hunter is taking a step back from his hunt. The 68-year-old reality star, whose real name is Duane Chapman, put off his honeymoon with his new wife Francie, 52, to try to find Brian, who has a warrant out for his arrest after his fiancé Gabby Petito’s body was found in Wyoming. Dog and Francie posed for photos along with a new interview with The Sun on October 13, where he gave an update on his search.
PETS・1 DAY AGO
Popculture

Leland Chapman may have left his family's beloved series Dog the Bounty Hunter back in 2012, but he is still following in his father Duane "Dog" Chapman's footsteps. Chapman, who like his father is a bail bondsman and bounty hunter, recently gave fans an up-close look at his day job as he was on the hunt for criminals.
TV & VIDEOS・12 DAYS AGO

It’s been nearly two weeks since the remains of 22-year-old Gabby Petito were discovered in Grand Teton National Park, but her fiancé, and the main person of interest in her death, Brian Laundrie, is still missing. As the investigation into the YouTuber’s untimely death continues, more and more information is...
CELEBRITIES・14 DAYS AGO
enstarz.com

An FBI behavioral analyst claims that the day Brian Laundrie and Gabby Petito argued in a Wyoming restaurant on Aug. 27 may be the key to the latter's tragic fate. The 22-year-old YouTuber was seen having an explosive argument between her fiancé and a worker at a Jackson Hole restaurant called Merry Piglets witnessed the entire thing.
2 HOURS AGO
nickiswift.com

Gabby Petito's Cause Of Death Revealed

The body of 22-year-old Gabby Petito was found in Grant Teton National Park in Wyoming on September 19, eight days after her parents reported her missing, according to Reuters. Petito had been on a cross-country road trip with her fiance, Brian Laundrie, when he returned home to Florida on September 1 without her, and her whereabouts were unknown, CNN reports. A search for Petito ensued, and authorities discovered remains about a week later. "Coroner Blue's initial determination for the manner of death is homicide. The cause of death remains pending final autopsy results," the FBI said at the time.
CELEBRITIES・3 DAYS AGO
Audacy

NEW YORK (1010 WINS) – North Carolina authorities are investigating several still-unfounded reports of Brian Laundrie sightings in the area of the Appalachian Trail. Gabby Petito's fiancé — the lone person of interest in her death — has been missing for more than two weeks as authorities continue to try and track him down. A warrant remains out for Laundrie's arrest relating to his actions after Petito's killing.
ANIMALS・13 DAYS AGO

Gabby Petito Case: Ex-FBI Researcher Claims Brian Laundrie Was ‘Very Much in Control’ of Her During Road Trip

As more information continues to surface about the relationship between Gabby Petito and Brian Laundrie, an ex-FBI Behavioral Science Unit researcher, is revealing her thoughts about the former couple’s behaviors. During her recent interview with Fox News, the former researcher, Dr. Ann Wolbert Burgess, stated Gabby Petito’s boyfriend was very...
20 HOURS AGO
Tyla

Gabby Petito's friends have opened up about the impact of her death and the autopsy results in a candid interview. On Tuesday the results of the 22-year-old's autopsy revealed she died by strangulation. Gabby and her fiancé, Brian Laundrie, were on a road trip across the US before she vanished in August.
CELEBRITIES・2 DAYS AGO
Fox News

Florida fugitive Brian Laundrie’s sister told protesters outside her Lakewood Ranch home Monday that her family has been ignoring her following the disappearance of her brother and the death of his fiancée. When asked if her parents were helping Brian Laundrie evade authorities, she said, "I don't know" and that...
PUBLIC SAFETY・11 DAYS AGO
ETOnline.com

Nancy Grace is weighing in on Gabby Petito's case and Brian Laundrie's whereabouts. The legal commentator spoke with ET about the latest developments in the 22-year-old vlogger's tragic death as the manhunt for her fiancé continues. She also touched on Laundrie's family's legal culpability in the case and what the next steps are.
CELEBRITIES・9 DAYS AGO

Dog the Bounty Hunter continues to search for Brian Laundrie in Florida.
1 DAY AGO
People

The mother of Gabby Petito has reacted to comments made by Brian Laundrie's attorney after Wyoming officials revealed the Long Island, N.Y., woman was strangled to death. Steven Bertolino, the lawyer retained by the Laundrie family after Brian returned from a cross-country road trip without his 22-year-old fiancée, issued a statement on Tuesday, referring to Petito's death "at such a young age" as a "tragedy."
PUBLIC SAFETY・3 DAYS AGO
Newsweek

The parents of Gabby Petito described in heartbreaking detail the moments when they heard the news that their 22-year-old daughter’s remains were believed to have been found in Wyoming after she had been missing for weeks, and say they believe her fiancé, Brian Laundrie, is still alive. Joe Petito and...
CELEBRITIES・10 DAYS AGO
WCBS News Radio 880

NEW YORK (WCBS 880) – The father of Brian Laundrie agreed to join the search for his missing son Wednesday. Meanwhile, an interview with Dr. Phil revealed more details in the Petito family's perseverance after losing their daughter and what they want to come from the Laundrie search. Here's the...
NEW YORK CITY, NY・9 DAYS AGO
maggrand.com

The official autopsy report of Gabby Petito may finally be released this week. On Monday, the Wyoming coroner that performed an autopsy on the 22-year-old announced that he would be holding a virtual news conference on Tuesday, Oct. 12 at 12:30 p.m. Dr. Brent Blue will discuss the post-mortem results, and he will also confirm the official cause of death of Petito.
PUBLIC SAFETY・4 DAYS AGO
WFLA

"A normal parent, when you text someone that 'you're gonna call the cops cause you can't find your child' they would reply," Gabby's father Joseph Petito said. "No response. No nothing."
TAMPA, FL・10 DAYS AGO