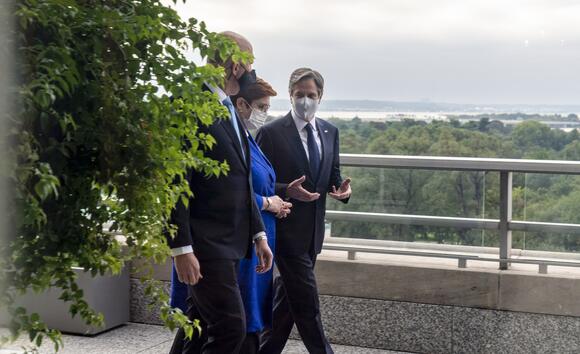 Australia’s decision to acquire nuclear submarine technology from the United States and the United Kingdom helps ensure that security ties between the three powers will withstand China’s economic influence.

“There are only six nations capable of fielding nuclear-powered submarines: ourselves, the other permanent members of the U.N. Security Council, and India,” U.K. national security adviser Stephen Lovegrove said Thursday. “Australia will become the seventh, representing a significant commitment to peace and stability in the region ... These are profound, strategic shifts and collaboration on nuclear projects creates indissoluble bonds around which new matrices of collaboration can be built.”

Secretary of State Antony Blinken situated the newly unveiled agreement within a broader rebuke of China that foreshadows further cooperation to counter threats from Beijing.

“Our discussions today reflect how the alliance between Australia and the United States goes far beyond our military ties, deep and as important as they are,” Blinken told reporters at the State Department. “The world saw China's aggressive response when Australia led calls for an inquiry into the origins of COVID-19 ... We've made it clear that actions like these targeting our allies will hinder improvements in our own relationship with the Chinese government.”

‘PEACE IN OUR REGION’: US STRIKES DEAL TO EXPAND MILITARY PRESENCE IN AUSTRALIA

President Joe Biden’s team offered standard assurance that the submarine “partnership is not aimed [at] or about any one country,” but China’s growing power and truculence lurked behind the many references to the need for increased vigilance and military force for the U.S. and its allies. The agreements set the stage for Australia to enjoy a substantial upgrade to its submarine fleet while tightening links between the U.S. and Australian military to ensure close cooperation over the next several decades.

“The reason for all this is clear: China,” senior British lawmaker Tom Tugendhat, who chairs the Foreign Affairs Committee in the House of Commons, wrote on Twitter. “We know that we need a regional power … to partner with, and the nation that most closely shares our interests and can be relied on completely is Oz.”

“The nuclear submarine cooperation between the U.S., the U.K., and Australia has seriously undermined regional peace and stability, intensified the arms race, and undermined international nonproliferation efforts,” Chinese Foreign Ministry spokesman Zhao Lijian said Thursday. “The export of highly sensitive nuclear submarine technology to Australia by the U.S. and the U.K. proves once again that they are using nuclear exports as a tool for geopolitical game and adopting double standards.”

“Australia is not seeking to acquire nuclear weapons or establish a civil nuclear capability,” Morrison said. “And we will continue to meet all our nuclear nonproliferation obligations.”

“Tonight, Beijing will have realized the pressure on Australia has triggered a response,” he wrote. “This is a powerful answer to those who thought the U.S. was pulling back and the propaganda claiming Washington wasn’t a reliable ally.”

The agreement comes at the expense of France, which is outraged at the unexpected loss of its own deal to sell diesel-powered submarines to Australia. Biden and Blinken affirmed France’s importance as an Indo-Pacific power, but the agreement upends a central plank of its approach to the region. Yet, Blinken also hinted there is value in intensifying the U.K.’s engagement in the Indo-Pacific.

“This partnership with Australia and the United Kingdom is a signal that we’re committed to working with our allies and partners, including in Europe, to ensure a free and open Indo-Pacific,” he said Thursday. “We welcome European countries playing an important role in the Indo-Pacific. We look forward to continued close cooperation with NATO, with the European Union, and others in this endeavor.”

President Joe Biden’s nominee for ambassador to China appeared to change his tone about the war of words between China and the United States on the coronavirus after he repeatedly criticized both sides for a “blame game” last year.
FOREIGN POLICY・4 HOURS AGO
WashingtonExaminer

The U.S. military is only “marginally” able to defend the country’s national interests at home and abroad, the conservative Heritage Foundation’s 2022 Index of U.S. Military Strength found.
AEROSPACE & DEFENSE・18 HOURS AGO
WashingtonExaminer

The recent test of a hypersonic nuclear-capable missile by China is a reminder that any future major war between great powers will look very different to the last. In addition to hypersonic weapons - launched into space and gliding to targets - we can probably also expect Artificial Intelligence "drone swarms", and autonomous rockets delivering vehicles and supplies to battlefields.
MILITARY・1 DAY AGO

Former Secretary of State Mike Pompeo described China as an "adversary" on "Hannity" Tuesday night, adding how "America is showing weakness" following the debacle in Afghanistan and after the Iranians fired missiles from the Gaza Strip into Israel. MIKE POMPEO: "What we did for four years was make clear to...
U.S. POLITICS・13 HOURS AGO
Newsweek

The legislation approved by the Senate Committee on Foreign Relations aims to allow the U.S. to counter China's maritime claims with targeted sanctions.
FOREIGN POLICY・9 HOURS AGO
Newsweek

China Tells U.S. to Stay Out of South China Sea After Submarine Accident

USS Connecticut's accident in the South China Sea in October has become an opportunity for China to denounce freedom of navigation—and the AUKUS pact.
POLITICS・4 HOURS AGO
Telegraph

US military shocked: China flew hypersonic nuke capable missile around the globe; ‘We have no idea how they did this’: report

In August, China tested a nuclear-capable hypersonic missile that flew around the earth before hitting its target, a new report first revealed Saturday. U.S. officials were reportedly surprised by China’s capabilities. The missile circled the earth in low-orbit space and sped down to its target, though it landed some two-dozen...
MILITARY・2 DAYS AGO
Reuters

GENEVA (Reuters) - Washington is concerned about hypersonic missile technology and its potential military applications by China and Russia, a U.S. arms control official said on Monday, after a media report that Beijing had tested a nuclear-capable hypersonic glide weapon. Hypersonic weapons are usually defined as missiles that fly more...
MILITARY・2 DAYS AGO
FOX40

BEIJING (AP) — China said Monday its launch of a new spacecraft was merely a test to see whether the vehicle could be reused. The launch involved a spacecraft rather than a missile and was of “great significance for reducing the use-cost of spacecraft and could provide a convenient and affordable way to make a […]
INDIA・1 DAY AGO
Newsweek

Iran and Venezuela agreed on "the commitment to reinforce multilateralism and reject the interference and interventionism" of the United States.
WORLD・2 DAYS AGO
The Guardian

‘We are worried’: Indonesia and Malaysia express concern over Australia’s nuclear submarine plan

US and Georgian leaders reaffirm military partnership amid Russian threat

Military leaders from the United States and Georgia reaffirmed their efforts to work together to support Georgian forces on Monday.
GEORGIA STATE・2 DAYS AGO

Mohammed bin Salman could join Vladimir Putin and Xi Jinping in failing to appear at Cop26 next month, in a potential blow to Boris Johnson’s goals for the crucial climate summit. The Saudi Crown Prince is among several world leaders who are understood not to have confirmed their attendance in...
WORLD・3 DAYS AGO
thedrive

Such a capability could potentially allow China to execute a nuclear strike on any target on earth with near-impunity and very little warning. A report from Financial Times' Demetri Sevastopulo and Kathrin Hille states that China has tested a nuclear-capable hypersonic glide vehicle that goes into space and traverses the globe in an orbital-like fashion before making its run through the atmosphere toward its target. There would be huge implications if such a system were to be operationalized, and according to this story, which says it talked to five officials confirming the test, the U.S. government was caught totally off-guard by it.
MILITARY・3 DAYS AGO
AFP

The United States is "very concerned" about China's hypersonic missile tests, US disarmament ambassador Robert Wood said Monday, after reports that Beijing launched one with a nuclear capacity in August. On Saturday, the Financial Times reported that China had launched a hypersonic missile that completed a circuit of the planet before landing, missing its target. "We are very concerned by what China has been doing on the hypersonic front," said Wood, who next week steps down from his post in Geneva after seven years. Hypersonic missiles, like traditional ballistic missiles, can fly more than five times the speed of sound (Mach 5). But they are more manoeuvrable than their ballistic counterparts and only need a low trajectory in the atmosphere, making them harder to defend against.
MILITARY・2 DAYS AGO
ourcommunitynow.com

CHINA has reportedly placed its military on “high alert” as state controlled media warned Taiwan of a looming “doomsday” amid fears of invasion. Beijing and Taipei are.
MILITARY・4 DAYS AGO