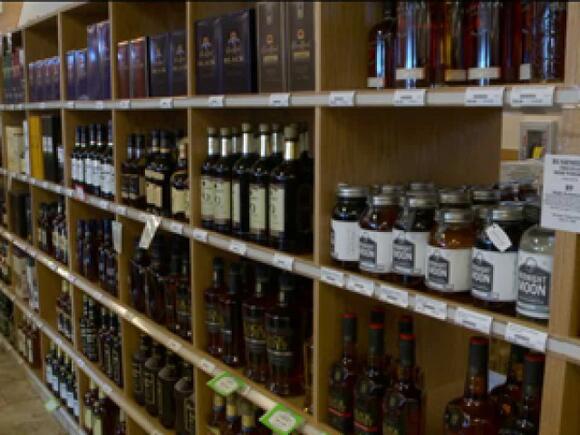 A lawsuit has been filed against Utah's Department of Alcoholic Beverage Control, accusing the agency of denying people millions in wages and benefits dating back decades.

The lawsuit, filed in federal court, accuses the DABC of improperly classifying 13 people as "independent contractors" for package agencies when they should have been treated like other state employees. The plaintiffs work in stores from across rural Utah including Sanpete, Wayne, Millard, Beaver and Garfield counties.

A package agency is a DABC-controlled liquor store that is operated by contract. They are most often utilized in rural areas, as is the case with the plaintiffs, to save the state some operating costs. The DABC will also allow a distillery or brewery to run a package agency to specifically sell their merchandise.

Package agents are paid a flat fee for operating DABC stores (and cannot turn a profit as state liquor sales are a legally mandated cost-plus 88% markup). As a liquor control state, Utah controls the sale and supply of alcohol.

The lawsuit alleges the DABC retains exclusive control over training, hiring and sales decisions made by the rural package agency operators yet also refuses to count them as state employees. Instead, they were counted as "independent contractors" denying them overtime wages and benefits.

When the 13 package agency employees asked for a review, they were told by the DABC and the Utah Attorney General's Office that they were "independent contractors." Their lawyers claimed that when they raised concerns about their work hours, the lack of wages and benefits, DABC staffers threatened to retaliate against them by canceling their contracts.

The lawsuit seeks at least $8.6 million in damages and to have them listed as state employees.

"Initiating an action against a state entity is a difficult choice that has effectively put a target on our clients’ backs, but they feel strongly about their responsibilities to each other, their families, and all other similarly situated workers," said the plaintiffs attorney, Erika Larsen, in a statement announcing the lawsuit.

A spokesperson for the DABC declined to comment, citing the commencing litigation.

Two owners of a Massachusetts-based asbestos remediation company were arraigned Tuesday in Sixth Division District Court in Providence on wage-theft charges stemming from work performed during the construction of Barrington Middle School. Thomas McCoog, 64, and Amy Franklin, 57, own Franklin Analytical Services in the town of Marion. They are...
BARRINGTON, RI・3 DAYS AGO
Aiken Standard

Dozens of Savannah River Nuclear Solutions employees are suing their employer, the top contractor at the Savannah River Site, in an effort to invalidate a COVID-19 vaccine mandate and to have barred a policy described in court documents as “fired if no vaccine.”. More than 75 people are named as...
LAW・7 DAYS AGO
expressnews.com

Seven migrant farmworkers from Mexico allege in a federal lawsuit filed in San Antonio that they were shorted wages, stiffed on travel expenses and placed in a “squalid” and “dilapidated” labor camp by a South Texas contractor. The group seeks at least $250,000 in damages from Pablo Francisco Cantu, both...
TEXAS STATE・8 DAYS AGO
therealdeal.com

Former “worst landlord” sued for wage theft on his birthday

Ved Parkash has ticked most of the boxes on the bad-landlord bingo card. He took the top spot on the public advocate’s worst landlord list in 2015 by racking up 2,200 open housing violations. In 2016 he was sued by 38 tenants for allowing violations to run rampant at 750 Grand Concourse. The next year, several tenants in the rodent-infested building came down with rat-borne diseases, and one died.
NEW YORK CITY, NY・9 DAYS AGO

It’s been a busy, successful summer for three minority-owned cleaning businesses in Arkansas that received assistance from the Arkansas Procurement and Technical Assistance Center while pursuing government contracts. These clients, aided by PTAC Counselor Tim Hicks, won several state contracts. Best Janitorial now has a contract with the Division of...
LITTLE ROCK, AR・10 DAYS AGO
ABC7

Some of the workers -- who cared for elderly residents 24 hours a day, six day a week -- say they were paid as little as $2.40 an hour.
CALIFORNIA STATE・1 DAY AGO
mountain-topmedia.com

PIKEVILLE, Ky. — Two adults and a student have filed a federal lawsuit seeking to have the Pike County School District’s mask mandate declared unconstitutional and voided. The student, identified only as “N.R.,” her parent, Mikey Ratliff, and Levi Newsom, who is identified as a resident and taxpayer in the Pike County School District, filed their complaint Wednesday in U.S. District Court in Pikeville. Court records indicate the plaintiffs are not represented by an attorney, but that Ratliff and Newsom are representing themselves.
PIKEVILLE, KY・6 DAYS AGO
KTNV 13 Action News

Mass General Brigham employees suing the hospital system after being denied exemptions for a coronavirus vaccine mandate face unpaid leave Thursday as a district court judge denied their motion for a preliminary injunction. “It is an emergency situation. Mass General Brigham is a major health care provider in a major...
LAW・2 DAYS AGO
Turnto10.com

CHEYENNE, Wyo. (CBS4) — A federal agency is pursuing damages against a Washington-based non-profit on behalf of a Black man who claims he was called racial slurs by co-workers and eventually fired from the company for complaining about it. The Equal Employment Opportunity Commission (EEOC) filed a lawsuit in U.S....
CHEYENNE, WY・14 DAYS AGO
KIFI Local News 8

On October 29, Maine’s Center for Disease Control and Prevention will start enforcing a rule requiring all health care workers in the state to be vaccinated against Covid-19 — unless the Supreme Court intervenes to stop it. Does v. Mills is the first significant case to reach the justices that...
U.S. POLITICS・8 HOURS AGO
iHeartRadio

Fourth Stimulus Check, Worth $1,400, Could Happen, But Only For One Group

There is a chance another stimulus check could go out, but the recipient list would be more limited than the others.
BUSINESS・2 DAYS AGO
2 On Your Side

'There is not a gray market.' Chair of regulatory board issues warning about gifting cannabis

ALBANY, N.Y. — The chairwoman of the state's cannabis control board has said 'not so fast' regarding a loophole that pop-up shops and other vendors have used to allow Western New Yorkers to be "gifted" recreational adult-use marijuana. The method, which involves the purchase of a separate item and the...
ALBANY, NY・17 HOURS AGO
The Independent

A Florida worker has revealed he applied for 60 entry-level jobs in one month and got just one interview, despite widespread complaints of a labour shortage from business owners.Joey Holz, who has experience working in the food service industry, applied for two jobs every day from 1 September 1 to 30 September in the local Fort Myers and Lee County area.Of the 60 roles he applied for, Holz said he received just 16 email responses, spoke to four of these companies by phone and had only one interview.Holz wrote in a now-viral Facebook post that he decided to embark on...
ECONOMY・1 DAY AGO
WNYT

Lawyer: You can go to work high, with limits

According to new guidelines released by the Department of Labor, New Yorkers can be high on marijuana when they go to work. It's no longer something you can be fired for. However, you can't be too high. So how does an employer figure out what too high is?. Leslie Silva...
NEW YORK CITY, NY・23 HOURS AGO
theeastcountygazette.com

Golden State Stimulus is an initiative of Californian state to provide monetary assistance to eligible families and individuals, which primarily aims to support Californians with low and medium incomes and assist those struggling financially amid the COVID-19 pandemic. For Californians who qualify, there is no requirement to do anything other...
CALIFORNIA STATE・1 DAY AGO
QuadCities.com

Even as covid numbers slowly decline in the state, Illinois Gov. JB Pritzker has said there may be tougher covid restrictions ahead. At a press conference this week, Pritzker noted that rather than a removal of the mask mandate and a pulling back of mitigations, covid restrictions may remain and be tightened up if numbers begin to rise like they did last fall.
ILLINOIS STATE・2 HOURS AGO
WEKU

Just before the pandemic, Nitin Bajaj and his wife, Nimisha Lotia, rented an apartment they own in Los Angeles to two young women. "They were really nice to talk to," Lotia says. But as soon as the pandemic hit, the new renters, both in their late 20s, stopped paying the...
LOS ANGELES, CA・12 HOURS AGO