Schwarzenegger says Californians 'made the right decision' not to recall Newsom

By Jordan Williams
The Hill
30 days ago 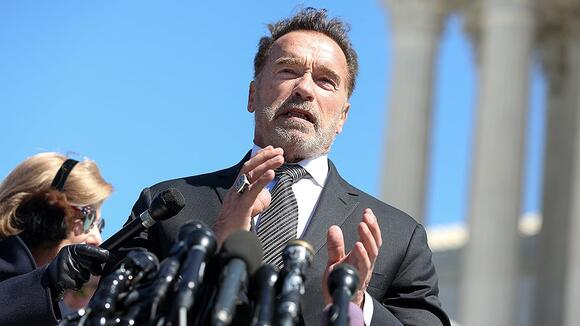 Schwarzenegger, who became governor after Gray Davis was recalled in 2003, made the remark in an interview with The Los Angeles Times days after Newsom easily defeated the recall.

“I think voters made the right decision,” Schwarzenegger said “It’s better to stay with someone who you know what they’re going to do, rather than someone who comes in wacky and is changing everything around.”

Newsom sailed to victory on Tuesday when voters rejected the GOP-led effort to recall him. The Associated Press called the race after 33 percent of voters supported the recall with 59 percent of the vote tallied.

According to a tally from the California secretary of state’s office, 63.8 percent of voters voted “no” on the question to recall Newsom, compared to 36.2 percent who voted “yes.”

The recall was largely fueled by anger surrounding the governor’s handling of the coronavirus pandemic. But he would ultimately be helped by a summer rebound which involved the race to get residents vaccinated and stimulus measures passed by the Democratic-controlled legislature just as ballots were being sent around the state.

Among the crowded field of candidates looking to take Newsom’s place, conservative radio host Larry Elder emerged the front-runner in the race. He won 47 percent of the vote in the ballot’s second question, according to the Secretary of State’s office.

Schwarzenegger didn’t tell the Times how he voted in the recall, but he did harshly criticize the GOP field.

“It’s just disastrous,” the actor said, adding that none of the Republicans appealed to a large share of California voters. Schwarzenegger specifically said that Newsom was “fortunate” that Elder was the leading candidate.

“This is a good comeback story,” Schwarzenegger said, adding that Newsom was “down and in the trenches and against the ropes.

“I think he woke up and made adjustments, talking issues and all that stuff. And he was very fortunate he had Elder as the leading candidate on the other side,” he said.

A Food and Drug Administration advisory panel voted Friday to recommend a second Johnson & Johnson shot for emergency use authorization. The vote in favor was unanimous, with panel members citing the need to supplement protection in people who were vaccinated with the Johnson & Johnson shot. The decision will...
HEALTH・1 DAY AGO
The Associated Press

LOS ANGELES (AP) — New York real estate heir Robert Durst, who days ago was sentenced in a two-decade-old murder case, has been hospitalized after contracting COVID-19, his lawyer said Saturday,. Defense Attorney Dick DeGuerin said he was notified that Durst was admitted after testing positive for the coronavirus. DeGuerin...
LOS ANGELES, CA・2 HOURS AGO
ABC News

Oct 15 (Reuters) - The Pentagon has offered unspecified condolence payments to the family of 10 civilians who were killed in a botched U.S. drone attack in Afghanistan in August during the final days before American troops withdrew from the country. The U.S. Defense Department said it made a commitment...
MILITARY・14 HOURS AGO

Standing in front of the Capitol, President Joe Biden paid tribute on Saturday to fallen police officers and honored those who fought off the Jan. 6 insurrection at that very site
U.S. POLITICS・4 HOURS AGO
CBS News

1 deputy killed, 2 wounded in shooting at Houston bar: "We believe they were ambushed"

A constable deputy was killed and two others were wounded in a shooting early Saturday while they were working an extra job at a bar in Houston, according to police. One of the wounded deputies was shot in the back, and the other was shot in the foot. On Saturday...
HOUSTON, TX・3 HOURS AGO
CNN

New York (CNN) — Netflix fired an employee for sharing "confidential, commercially sensitive information" outside of the company about Dave Chappelle's controversial stand-up special "The Closer," the company confirmed to CNN on Saturday. The employee leaked the information to Bloomberg, which published it in an article on Wednesday. The unidentified...
TV & VIDEOS・4 HOURS AGO

The Islamic State claimed responsibility for a deadly suicide bombing that left 47 people dead on Friday in southern Afghanistan, The Associated Press reported. The Sunni extremist group said late Friday in a statement over social media that guards outside of the Shiite mosque in Afghanistan's Kandahar province had been shot and killed by two of its members, and that one explosive had erupted inside the mosque while the other was detonated at the mosque’s entrance, according to the AP.
PUBLIC SAFETY・10 HOURS AGO
NBC News

BEIJING — Three astronauts entered China’s space station for a six-month mission, setting to work Saturday after successfully docking aboard their Shenzhou-13 spacecraft. The astronauts, two men and a woman, were seen floating around the module before speaking via a live-streamed video. They pledged to do their best in carrying out their missions as the country moves toward completing the new orbiting outpost.
AEROSPACE & DEFENSE・9 HOURS AGO